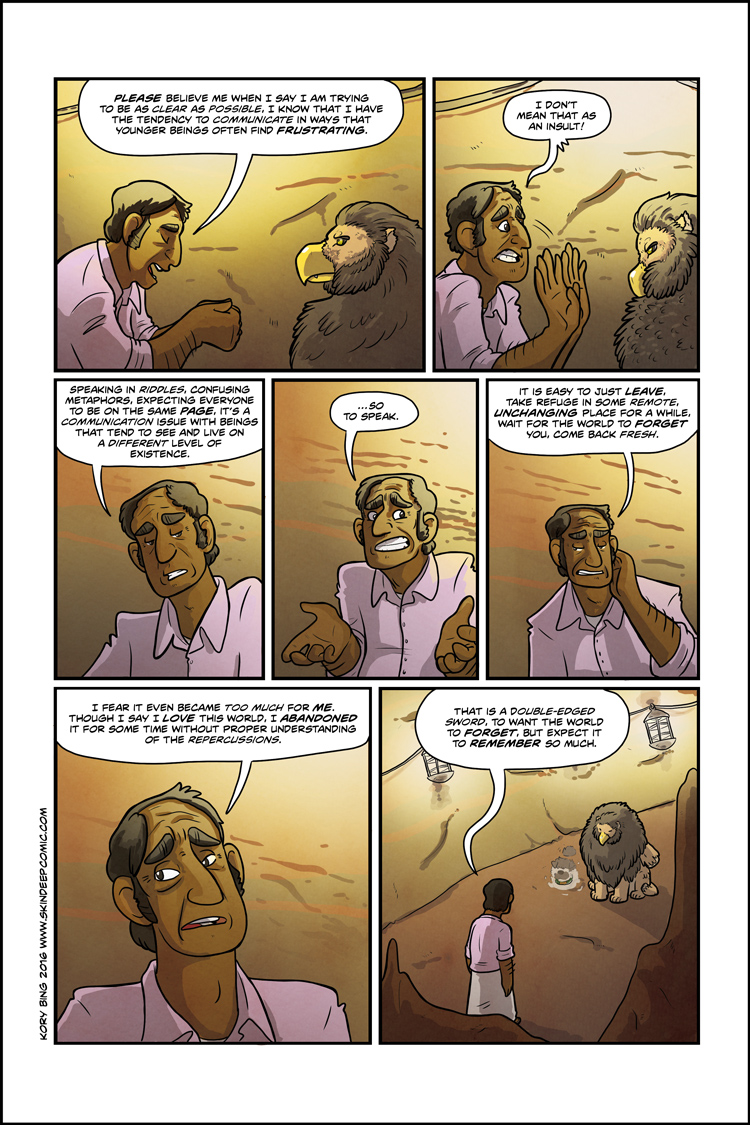 There’s only 64 hours to go on the Medallion Kickstarter and we’re pretty close to cracking $10k and getting a SECOND fancy bronze medallion! What do you think, think we can make it in time?

Depends upon how much he remembers.
He is looking somewhat out of it, in the final panel of the last page of chapter 1.

I gotta say, Ravi’s doing a lot better apologizing than expected. He’s even trying to correct himself when something comes out wrong, way to go.

I think Ravi made it real easy for the world to forget him since he was only a Raven last time he was around. The Raven in the vision Michelle had on page 5 of Illumination, I think that Raven was Ravi in disguise. That’s way he isn’t mentioned in the family history. Everyone probably thought he was Phineas’ familiar or something. And that oval thing in the bottom left is the Phoenix egg making medallions with swirly magic.

Which explains why James is even here right now. Ravi could lead Michelle to the egg cause he knows where it is, so why need James. In the vision, both Ravi(if that’s him) and Phineas were round when the egg’s magic was working. The Finn bloodline is the key that Ravi used to help lock the magic away. That’s another reason why the Finns needed to hang around, they are literally the key.

I understand the vision now.

Hrm. An interesting hypothesis. (Not theory! Sheesh that word is misused so much.) I look forward to seeing if it’s true. It may very well be, it does seem to fit the imagery in the vision. I had never noticed until now the grey thing wrapping the little shapes in magic, that these little shapes might be medallions.

Couple minor holes in it. If the Finns are the key, but the magic originates from the Sphinx, why is there no sphinx in the vision contributing to the creation of the first medallions? Phineas’ presence doesn’t implicitly suggest direct involvement in the creation of the medallions themselves, just collusion in The Plan™ which involved creation of medallions, and later the hiding of the primary components needed to make them (and possibly to prevent reverse engineering of sphinx magic, which I think it was mentioned Dragons coveted).

Phineas might have been seen in the vision simply because he was one of the first recipients of a medallion, maybe even an early test subject for the magic, as well as his participation in hiding the egg. James’ presence, likewise, may simply be due to politeness. As rude as Ravi is in social graces, some forms of matters remain consistent, such as not barging into a family crypt. Ravi would understand and respect sites designed for eternal veneration, such as a crypt, and so he’s only entering with James’ permission thusly. He also mentioned that a lot has changed since he last visited the caverns, so James might also be there as a guide. Ravi may have helped construct the original caverns, but the entrance at least has been moved since, and it’s highly likely that the caves have been renovated, remodelled, suffered collapses and been subject to new excavations over the years as one family of griffins after another continued to leave their marks of respect and veneration in it’s walls and tunnels. Ravi could likely find the egg eventually, but he’d have to wander the caverns for a bit, noting in his memories where tunnels used to be and are now, updating that mental map as he went. James can just take them right to it.

Maybe no sphinx in the vision because it’s from the point of view of a sphinx that was present?

Not the swirly stuff on this page. Michelle’s vision from a while back. http://www.skindeepcomic.com/archive/illumination-page-5/

… Okay, Ravi I’ll give you the benefit of the doubt and take you off my shit list. But you got to be prepared to walk the talk when it comes down to it.

I think it might take a few years for Ravi to get the idea he needs to walk the talk ALL the time, when he is dealing with mortals.

Which would be extremely difficult for him to do. If he’s truly ageless / immortal, what’s “walking the talk” mean to him? One generation? Three generations? He goes through those like we do days or weeks! His seemingly long apology is probably equivalent to, “Sorry I insulted your family. I’m special, y’see.”

Good. Good. Now just make sure to remember that next time you talk to people about important things that happened hundreds of years ago.

By the time this conversation is over, Ravi will be talking to a sphere of fur and feathers, with an angry-looking beak and tail poking out.

I hope James forgives him. The sincerity and hopes to make amends is even more saturated than the last page, and even I wanna reach through the computer and give this clueless immortal a hug and say “I forgive you.”

That’s better. The first part of an apology is understanding that there needs to BE one; the second part is understanding WHY, and the third part is knowing the difference between an apology and an excuse. Ravi does seem to have made it to the third part and is actually doing pretty well so far as explaining– that last panel says a lot. It must be frustrating, being surrounded by short-lived people who you learn to love but who you know will die in what seems like a very short time, comparatively speaking– you’d learn to love them in groups (like clans, families, species and/or cultures) rather than individuals. Ravi’s boorishness and rudeness comes across now more like somebody using a book titled “Dealing With Mortals For Dummies” than being someone who actually knows how to interact successfully with mortal beings on an equal level.

There’s also the possibility that immortals are seen as speaking in riddles and never explaining anything because they understand it all, and they, with their centuries of experience, make the connections easily with that context. An immortal may thuswise forget that the shorter lived species do not share his knowledge and more importantly, his experiences. They have no context within which to place that remark, so to them it seems as if it were a riddle.

Think of someone who had never used a computer before, maybe came from an isolated or otherwise technologically regressed area, and then speaking to someone who is ignorant or forgetful of the fact not everyone knows how to use a computer.. the second person would, to the first, sound like they were speaking in riddles. “Just drag the mouse across the desktop, click in the window…” …. suddenly he might get a mental image of someone smushing a live mouse into the top of a desk, dragging it across the desk, and then smacking it against a window. Or, they’d get a mental image of that, go ‘that can’t be right’ and just stare in complete bewilderment at the computer in front of them.

Without proper context, a lot of language becomes riddles as a lot of verbal communication does function on heavy context based assumptions, or else we’d never be able to say anything in any reasonable amount of time. An immortal might sometimes forget that mortals lack the context of centuries, especially if they lived among a particular family of them for several generations and they themselves maintained the context. ‘All the other finns knew what i was talking about, why do these not?’ forgetting that his presence itself was what was maintaining the context, and with it’s removal, what was once understood is now a frustrating riddle.

I’ve been through teaching a, at the time four year old, niece how to use a mouse.
There was no way I’d have used your idea, to explain to her how to use one.
First thing I did is explain how the mouse on the physical desktop relates to the cursor on screen. Then I explained clicking on things.

Alternatively: you went into that conversation expecting your niece not to know what was going on and approached the situation from the level of an instructor.

However, if you were dealing with somebody your own age who has no idea how to use a computer, you’ll rapidly become baffled and frustrated by their inability to function… until you’re informed that they’ve never actually seen a computer in their life. You don’t go into that conversation expecting somebody’s knowledge base to be so massively different, and oftentimes we, just as people, assume other people have at least *similar* life experiences.

Ravi is establishing here that he has difficulty remembering these people are so much younger than him and don’t have the same experiences or awareness that he does. Which is, in spite of how condescending he seemed to be, a sign of respect; he doesn’t see them as children (as many immortals are often depicted as doing), he wants to see them as equals, and he’s frustrated that they seem incapable of following his logic without recognizing full that, by comparison, they’re *extremely* young and have a completely different perspective.

Jeni, I think you’re missing the point. That was *deliberately* a bad example of explaining something.

I like how Martha is showing up beside James in the last panel. :)

I think in this page, Ravi is realising a lot of what he himself had forgotten he needed to remember and be aware of.

Oh, that was Martha! I wasn’t sure what that was

You can see the collar, floppy ears, and nose quite easily.

James always seemed so friendly, but he’s quite intimidating in his angry full griffon form.

Why are upset griffons so fluffy? I want to hug them even if they want to maul me. Oh the irony.

It’s supposed to make them look bigger, and thus scarier, than they are. Most all animals with fur or feathers do it! Just remember, this is like a wolf raising it’s hackles and baring it’s teeth in that ‘imma eatchur face’ way.

I think this proves that even an immortal like Ravi can be intimidated by a properly angry ball of fluff and feathers (with a wicked beak and mean gaze). The fact he has scars just adds to the intimidation.

Kickstarter update….
If you haven’t looked at it lately, do it now.
The $10,000 stretch goal has been unlocked.
Gryphon medallion by Quicksilver Mint.

We reached that stretch goal and more!

Like trying to explain a 30-year mortgage to a mayfly…

Okay. Even if Ravi doesn’t get full marks for his apology, he gets very high marks. He’s definitely coming across as explaining rather than excusing.

Why’s the comic showing up twice on this page? It’s like deja vu, haha!