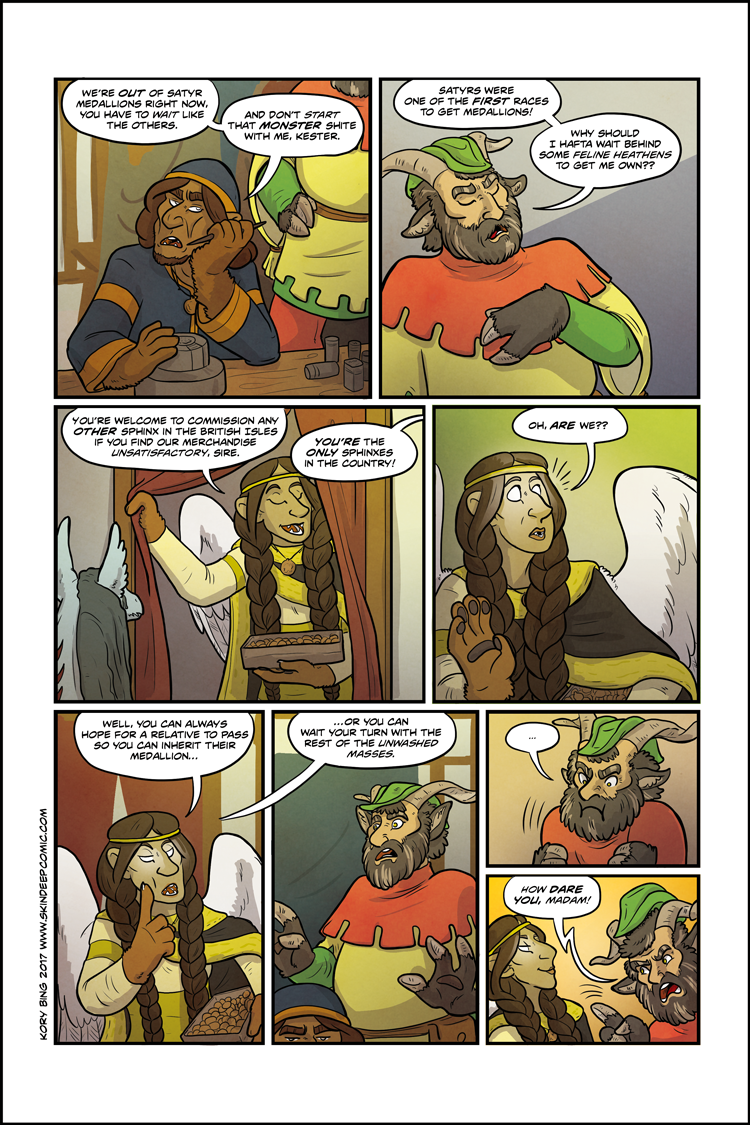 Jocasta LIVES for taking smug people down a peg.

Kester is a DYKWIA, puffed up with his own self importance, which makes him assume that because Satyrs were among the first species to get Medallions, he can jump the queue.

It’s used as an insulting shorthand description for someone abusing their societal position to try to convince wage slaves to simply Obey them.
It came out of the airline frequent flyers forums. It stands for “Don’t you KNOW who I AM !?!”

So Jocasta talks down to smug people by being smug herself… okay.

Best offense is to make them taste their own medicine

Irony is delicious. When you’re not on the receiving end.

A peg? She knocked him down all the pegs! Yes, she dares, she dares very much. Why not go and take a bath so the “unwashed masses” comment is irrelevant, s’bout all you can do in retort.

Also it’ll make the rest of us not faint from the smell of old goat.

Plus, you forget that Sphinxes are part feline, so your “feline heathens” comment isn’t exactly welcome here.

By the way… the plural for “Sphinx” is “Sphinges”. I’m not making this up. I wish I were. “Sphinges” sounds weird to me, too, but that’s how it is. I’m pretty sure it’s because it originates from the Greek word sphingein, meaning “to draw tight”. (And yes, it’s where we get the word sphincter from, too.)

Link here: http://www.dictionary.com/browse/sphinx
(scroll down to the section on “Word Origin and History”)

Just so this post doesn’t sound entirely like me complaining about the correct plural, here’s a little more background: The sphinx appears in more than just Greek and Egyptian legend. In India, it is known as purushamirugam (meaning “human-beast”). It is found depicted in sculptural art in temples and palaces, where it serves a warding purpose; it is said to take away the sins of the devotees when they enter a temple and to ward off evil in general.

In the Philippines, it is known as nicolonia. Depicted as part man and part eagle, it is known to ask riddles to wanderers who trespass in the Bicol region. Anyone who fails to answer its riddle is said to be carried off to the Mayon Volcano where the person is said to be offered to the volcano god, Gev’ra, to appease his anger.

In Sri Lanka, it is known as narasimha (“man-lion”), not to be confused with Narasimha, the fourth reincarnation of the deity Vishnu. (The difference is that the narasimha has the head of a human and the body of a lion, while the fourth reincarnation has the head of a lion and the body of a human.) It is the guardian of the northern direction, and is depicted on banners.

In Burma, it’s known as manuthiha. The legend is that it was created by Buddhist monks to protect a newborn royal baby from being devoured by ogresses.

In Thailand, it’s known by at least three different names. They’re depicted as upright walking beings (like a satyr… see the link below), but with the lower body of a lion or deer and upper body of a human. Here, too, they serve a protective function.

Were they called the British Isles in the 1200s? (Wikipedia dive later, it was English/Anglish isles. Britain was officially enstated in the early 1700s.) See what you’ve done? Now the comic update has become… educational! (yay)

That said, back to the important parts! Creatures being sassy. She is so smug. Look at her go!
Wosret totally has the Ike sulky-face down. Lions then, lions now, gotta get the face going.

Jocasta reminds me of my aunt. Except for the glowing eyes, absurdly long hair, and the wings, she has my aunt’s acerbic wit and tendency to not take sh*t from anyone, even pushy customers.

Just keep in mind that Greek theater is also the origin of “The Finger” as an obscene gesture.

Is it? i know they had their “Fico” gesture.

Satyrs were one of the first to get medallions?
Great! Your species has had its turn.
Now let the others have theirs!

Don’t take a dump on the people you think are below you. Remember the people who think they are above you have @$$e$ too.

What kind of creature is the neon horse? (I know, terrible description.)

The one in panel three, and the last panel of the previous page? Looks like a Buggane – compare it to Ike in Kill Them With Kindness.

I’m getting the distinct feeling this sort of thing gets repeated a lot, which leads to bad feelings against Sphinxes, which leads to a sort of smear campaign, which feeds into the eventual war against them.

I’m also getting the distinct feeling that, as news of the non-extinction of Sphinxes spreads, history will repeat…

Ya but the ancient saying goes ” whom ever forgets the past is doomed repeat it.” So if Michelle remembers what happened then than she will know what to do differently now.

Just to be informative, not picky: there’s no evidence for a phrase like this before George Santayana wrote in 1905, ‘Those who cannot remember the past are condemned to repeat it.’

Those who cannot remember the Alamo are condemned to repeat it. — Santa Yanna

Hey Minnesota do you still think that am what that complaining creature that is so full of himself that he could be related to Ravi, is.

I wonder if the Monk/priest will show up and get the Satyr to leave the shop for some beer or something. Because if he’s a Trappist monk, then it would make all the more seance for him to be there as a means of peace.

Peace though beer, THINK ABOUT IT! I can see the Satyr being tempted to calm down with a human monk who makes beer for the community! The Centaurs would love him.

“Heathens” is an interesting choice of words here. Besides the worship of Greek deities by the Finns, we don’t know a lot about organized religion among the mythical people in SD, but the phrasing here does imply there are some divisions. I do wonder whether there were theological schisms when magical species hitherto unknown to the European myth-folk (e.g. yakshas and totems) were discovered to exist elsewhere…

And yes, Jocasta is The Best.

Considering when this seems to be, I would be thinking Kester would be Christian Catholic. So he is likely regarding non-catholics as ‘heathens’.

That would be ironic given Greg’s trouble with his Catholic family.

Well, admittedly, we can’t say that with much certainty, because, if this isn’t particularly long after the manufacture of medallions started, then until that point magical folk like satyrs probably wouldn’t be living among humans, and would have to either create a cultural milieu of their own or absorb and adapt the local humans’… However, I can imagine that, given a little time, they’d try their darndest to assimilate and become quite overtly zealous. (HELLO FELLOW HUMAN, IT IS A FINE DAY TO BE A NORMAL PIOUS HUMAN, WHICH I AM)

“Besides the worship of Greek deities by the Finns(…)”

I was wondering how ancient Greek Paganism was introduced to a Scandinavian country, then I realized…

In their original derivation, “heathen” and ‘pagan” both meant rural. Christianity caught on first in the cities, and the old time religions held on in the countryside for a long time.

Of course, he likely means it in the same vein as “infidel” (“faithless” = “without MY faith”), whatever his own faith might be.

My question is, does the magic-ing of the medallion come before or after striking the design into the metal? I see Jocasta is carrying a box of what appears to be medallion blanks.

Also, do the sphynxs at this point know that the medallion magic is inheritable through family lines that cross with humans? Was it intentional or an accident? And, (sorry if this has been asked before), does that overlap magic still work when two full-blooded magical beings procreate? If the Finn’s had stayed human-disguised when they had their sons, would Jim and the rest have been born human-looking instead of gryphon?

I don’t know the answer to your first question.

As for the second… Maybe yes. However, gryphons normally lay eggs, so I can think of other questions, such as, “would Mary have given live birth, or would they hatch from eggs like Mork from Ork?”

Between species that normally give live birth (satyrs, Nemean lions, etc), the answer is definitely yes. As I recall, that question was answered back in Orientations, Part IV.

No-one, except possibly Kory, knows the answer to your first question.

The second question, a definite no.
At the time of the Vision flashback in chapter 2, and the flashback we are seeing now, there has not, yet, been time enough for a human generation of anyone to have been conceived, born, and lived, in human form, under Medallion Magic.
For it to become knowledge, there needs to be a first group that started hiding under Medallion Magic, which is the point in time we are at. Living as human, having a family as a human, and their children growing up having no idea of Medallion Magic. That’s yet to happen. Then those children unknowingly passing on the magic to their children. That’s yet to happen.
A full human generation. 60 to 80 years.

It is possible, even probable, that the sphinxes who are enchanting the medallions are aware of the inherited-protection clause of the spell. That was probably intentional, to prevent undisguised children from outing a family. (The multi-generation aspect, however, may have been a case of overshooting the mark.)

I haven’t seen any indication that there aren’t at least young first-generation children under inherited medallion protection.

Yes, there might be some children Mythicals in human form under the inherited protections. We do not, yet, know how many months it is since Medallions were first created, and the mass production and distribution was started.
On your last point, what you’re not thinking of, is the start of a human generation of hidden Mythicals, growing up NOT knowing of Mythicals or Medallion magic, despite being hidden by inherited Medallion Magic. The Mythical bloodlines being unknowingly mixed in with humans, won’t happen till that generation.

I think We found where Michelle gets her sense of humor.

OK so people gave us grief about what we would do to Ravi if we were there but no one is complaining about what we want to do to that pompous sayter up there.

Kester is not being shown any favouritism by Wosret, and Jocasta flawlessly shoves Kester back in his lowly place.
With Ravi, very rarely in the stories was any of the other characters calling Ravi up short on its behaviour. Kester is not getting a chance to get away with anything.

It took a littttttle bit longer than a page and a half before people were getting on Ravi’s case. If this guy lasts long enough, people will probably find him worth ranting about.

Kory, your facial expressions are always wonderful, but this page especially amuses me. Wosret is just so done with this (I especially love him peeking over the bottom edge of the sixth panel), Jocasta is just so sassy, and Kester is just so, so very full of himself. The bouncing hat in the last panel just makes me giggle. Thank you for that.