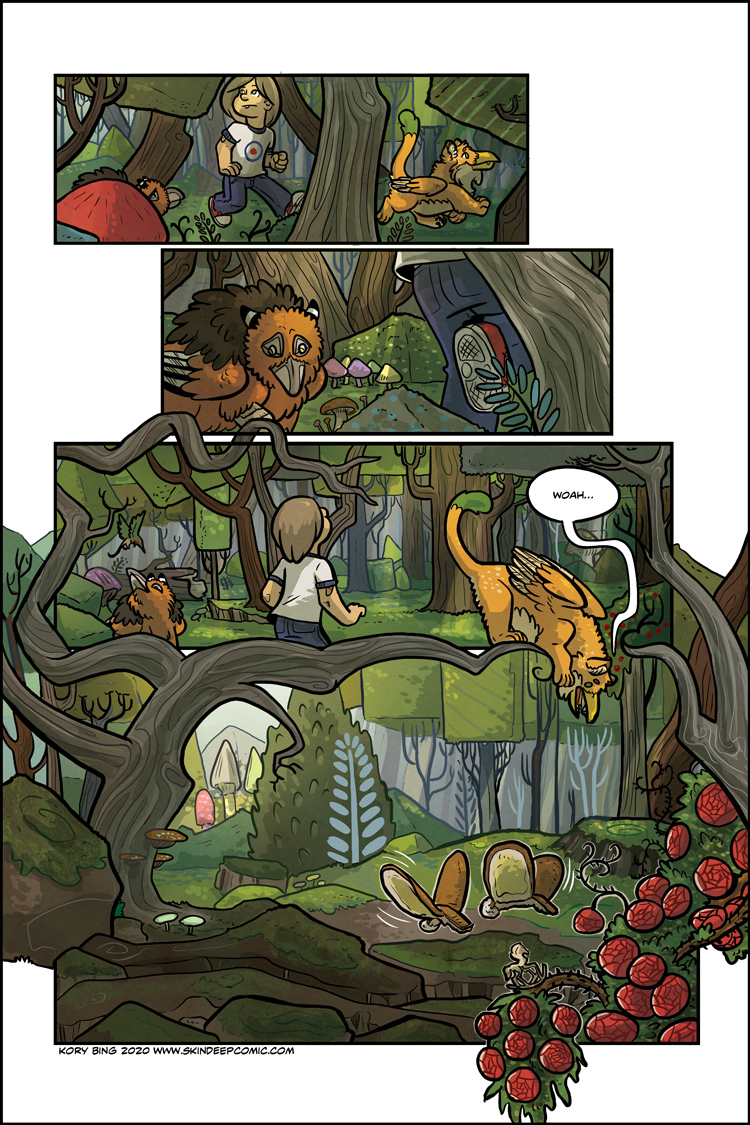 If Lorne thought Wonderland was weird before, he’s about to find out what ‘weird’ really is.

I’m making face-masks! They’re being made right now so all orders will go out once I get them, which should be in about 3 or 4 weeks! I have about half of them left to sell, so get them while you can! 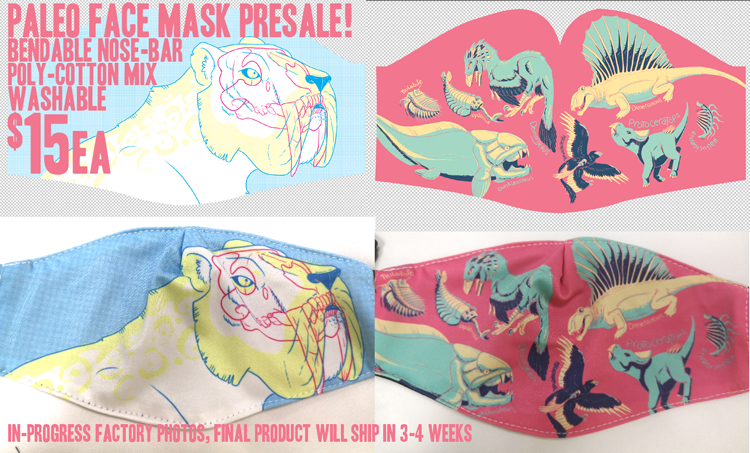 It is isn’t it? I think it’s a contender for my favourite page of Skin Deep.

Bread and butter…nevermind, too slow.

In the Wonderland Woods, the borders between frames are at their weakest, and it is possible to pass (or fall) through them in some places. Be careful, Jim, or you might meet your next-panel self! And don’t go chasing after those bread-and-butterflies – they are often not good to eat!

Jim: *ignores warning and jumps through to next panel* Hi everybody!

Lorne: Jim! Where did he go?

Both Jims: Hey, look at those flies made out of bread! You hungry? *chase off after bread-and-butterflies*

next panel!Rupert: NO! COME BACK! Those things don’t fly because they have wings, they fly by magic! And sometimes the magic is strong enough to take you along with them even if you eat them oh no…… *sinks onto ground, places forefeet over head in despair*

Both Jims: *are forced to go where their stomachs guide them, out of the woods and toward the town* AAAA! So uncomfortable! This is all your fault! Gonna hafta try puking these up!

Bread-and-butterflies (echoing from inside): Don’t follow, er, swallow us, we don’t know where we’re going either! hahahahaha!

The Dodo: *looks up from their Borogove game* Oh I say – it’s the young gentleman from before, times two! He, er, they look discomforted, and somewhat queasy.

The Mock Turtle: *glances round* Well, I would say that they appear to have butterflies in their stomachs. *lays down cards* Twonsies! :=)

Soooo, Jim is stand on a tree, branch, cliff… path? My mind just fucked with me

The panel. The reality is slowly unraveling before them and soon they will address the reader of the comic. O_O

And before long they’ll be breaking the 5th wall. (:

or the second wall.
why would wonderland do things in order ?

you guys focus on the “fabric of reality fraying” -ie the panel borders starting to break. Reality *always* breaks in wonderland. The lads have experienced it already when the path wrapped around on ’em.

But in focusing on this you’ve forgotten your wonderland lore.

I’m MUCH more concerned about the thicket of red roses than the bread-and-butterflies.

Personally I can’t tear my eyes off the rocking horse insect (?)

“A horsefly! Or, I should say, a rocking-horsefly!”

So either magic has seeped into everything and borked up the area to a point it deserves the title of “realm”, or the flowers that grow there are magic and the scent makes you high as the international space station. Either way, that poor dragon is going to be a wreck.

And those red roses look…Very Old. Those are some really big canes on those roses. I have some definite concerns about those roses and what Jim is leading Lorne and Rupert into…

Yeeeeessss, those roses look old. And disturbingly well-fed. But not so well fed as to turn down a surprise snack of say, a young gryphon, Nemean Lion and/or Jub-Jub Bird.

We know they survive* this adventure, but that doesn’t preclude being left with a scar or three as a reminder why you Don’t Leave The Path.

*puts on a pungent hat, clutching my thesaurus*
It is my thyme. I am ready to punish.

Personally I can’t tear my eyes off the rocking horse insect (?)