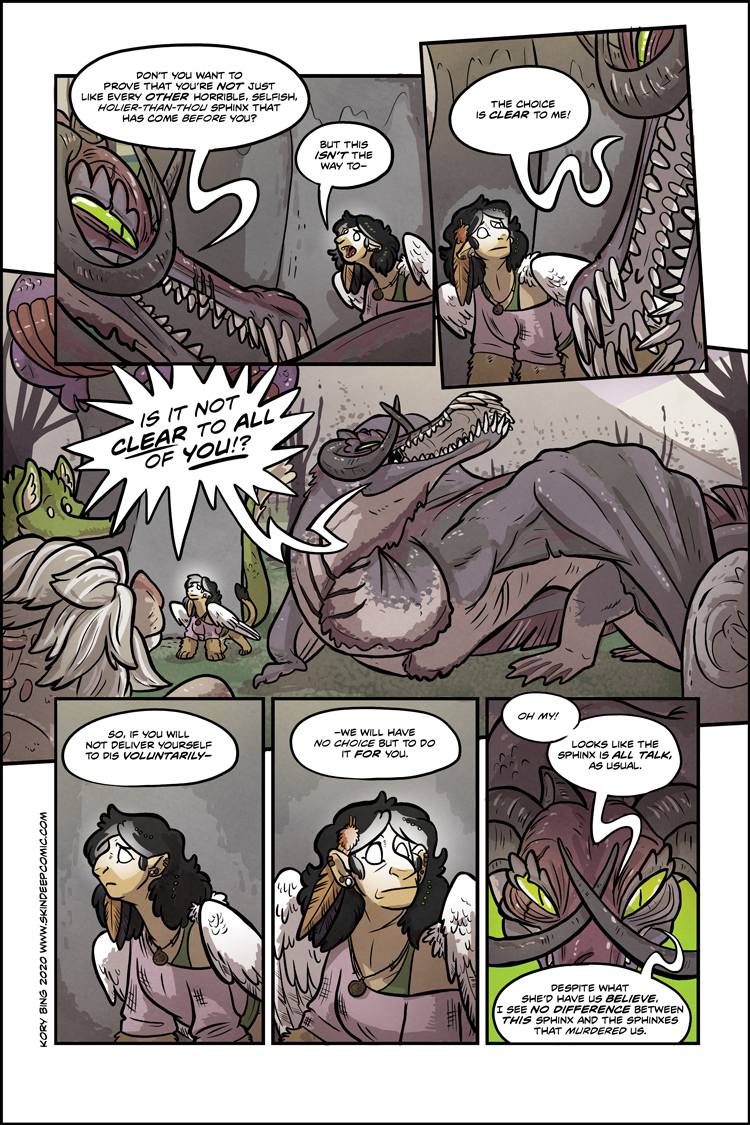 Happy 2020! This is the last page of the year! I will be taking a week off just to chill out and the comic will be back January 5th! Have a happy new year!!

There are only a few days left to sign up for the Patreon Pin Club if you want to get this big giant pin of Dis Pater! Click here for more information! 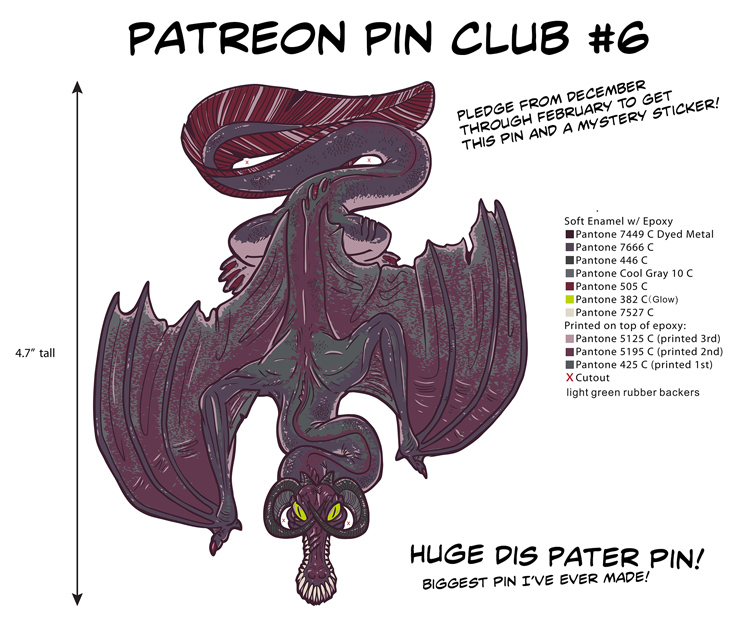 Five bucks says Bloodcarver goes to bat for her in calling it bullshit.

No bet. What else could possibly happen, Bloodcarver getting infused with the Sphinx powers, rendering the Demons’ plans pointless?

Does anyone else has a strong urge to punch dis patar?

Been there for the last few weeks.

His personality probably started deteriorating when those horns grew long enough to get in front of his eyes. It has to be irritating as heck, like hair hanging down in your face that you can’t brush away.

I mean, SOMETHING is very clear to me, but….

I have to wonder if he was always this cruel and emotionally abusive or if that just happened over a long period of time.

Monsters are made, not born. Events transpired to break and remold him into the drake-shaped THING we see before us now, but once upon a time he was as innocent as any of his “children”.

Yeah. Being the last survivor of the genocide of your entire race will probably leave an impact.

Kids these days! Won’t even volunteer to be sacrificial lambs!

I grew up in a home with a parent that would rant like this after dragging me into a “debate.” I worry for the other dragons, because when you’re not the target, you’re scared of being one, and that’s pretty paralyzing.

What a way to end the year; on a looot of worrying developments. the wait to see how this will turn out will be excruciating ;A; But alas, comics take time. I don’t know if my poor heart can take much more of this, even though realistically i know that Michelle can’t get stuck like this because plot ;v;

She’s all talk, he says, while literally not letting her talk

Exactly, condemn her fast enough and she can’t put up a defense. This evil dragon knows what he’s about.

Until presumably inevitable comeuppance, but this part he’s doing well.

but who is he trying to convince ?
the other dragons, that are too terrified to act against him anyway ?
the sphinx (as he see michelle, refusing to see the individual behind the qualifier), that has no apparent power to resist ?
himself ?

haha, wow, I hate this guy.

Yeah, someone needs to step up and knock this particular lizard down a few pegs. It’s almost sad, because his unhinged monologue shows just how alone he’s been all this time. Having anyone else as a peer, even a rival or an enemy, would have served to keep him at least sort-of grounded in practical concerns and plots. Alone, there’s been nothing to keep him from floating off to the stratosphere and losing touch with the reality of his own situation. Nevermind the hatchlings he’s responsible for, at the moment he literally could not care less about all of them. Michelle’s olive branch of correcting her ancestor’s wrong is literally the best deal dragonkind could hope for and the only way he might attain any degree of personal freedom himself, where he’s not at the beck and call of demons for shelter. Certainly, it’s a better deal than any deal said demons might have made, considering the strings they’ve likely attached to it.

His problem is that he’s forgotten that he’s not, in fact, all-powerful. He is old, drained of vitality over more centuries than the rest of the dragons there have been alive for. He sports numerous scars and wounds from the war, some of which doubtlessly haven’t healed because of Dis. He’s large, and while he may hit hard and leverage that weight he’s much bulkier and slower than most of the hatchlings surrounding him. Further, they are hundreds to his one even without Michelle helping. And he’s doing very little to hold their faith and loyalty right now, especially as they still seem to possess the logical reasoning he’s otherwise lacking.

Carver’s questions and pleads to Pater have not fallen on deaf ears, everyone else there has heard him. Michelle’s offer to help them stands in stark contrast to what they’ve heard of in the past from Pater and is a strong temptation besides. His aggression towards her is very blatently and directly attacking their own individual futures, they have a way out and he’s obviously standing in the way of it. Pater’s own ego doesn’t let him see how precarious his own position has become, I don’t expect him to survive long into the new year one way or another.

I have a feeling about how this will go.

Dis Pater: “DEMONS OF DIS!!! We have brought you the sphinx as promised!”

Gate Demon: “Oh, wow. Damn. Didn’t think you could pull it off…”

Dis Pater: “As was promised to us? Upon the capture of the sphinx?”

I’m getting a pretty strong vibe that Pater did not, after all, survive the war.

I mean, face it. He’s in Hell. He’s displaying personality traits that would explain his earning a permanent residency there. And he’s acting like he knows he can never leave. In fact he probably can’t.

Oh wow. This makes way too much sense.

Same. Those scars, too. I think he made a bargain with Hell, possibly.

Though if this turns into a ‘tragic, sympathetic villain’ I’mma end up sick at my stomach. :| :|

I get the feeling that draconic pride is a two-sided coin. On one side, it becomes the most noble of heights. On the other side, the darkest of lows. In fantasy, there are some creatures like this: their species are said to embody the greatest of good, and the darkest of evil. I wonder if Dis Pater (hell’s father?) was the latter.

See, other creatures, the sphinxes also refused. The dragons, however, went full genocide.* I suspect that black/white extremism may be part of their nature.

Once freed from Dis, the other side of the coin may be long-due for emergence. It may mean that among them may be found some of the strongest and most noble-minded, as balance to the world-may-burn that we’ve seen before. This could be Bloodcarver.

*Our source of sphinxes assaulting dragons seems to come down to Hell’s Father, this dragon. Yes, the sphinxes were haughty and stupid. We haven’t seen them attacking the dragons, though, through Michelle’s memories.

Wow Dis Pater is a manipulative asshole! I hope Michelle can pull through and at least if she doesn’t here we know people back in the avalon know where she is and can help

ow Gawd, I love HIM! Such an awesome villain!
the looks, the monologues, the manipulation, the cunning, the pride! The scars!
he’s got it all!

So, say you turn her over and it doesn’t work. Kinda putting all your eggs in one basket. If the amulets fail then there’s still at least one sphynx. If the sacrifice the sphynx idea fails…then what?

Strawman arguments, logical fallacies, and emotional manipulation rather than facts. So, how long’s Dis Pater one been a politician?

But seriously, Michelle is floundering from lack of experience dealing with extremists. Most of his arguments could be countered, while staying calm, but she wasn’t ready. So now she’s flustered and struggling, exactly as the millennia-old manipulator wants. Which really sucks, because if Michelle isn’t careful, then she’s going to need a rescuing. And most people aren’t interested in finding a way “into” hell. Just a way out…

i think you’ve had too many online discussions..

it’s not how it works in real life..

you can’t counter when you don’t have a turn so when your opponent is 100 times bigger than you and have a voice so much more powerful that he could drown whatever you’d say even were you to scream even as HE would remain calm..

Also there is nothing preventing him from using violence were he to feel like she’s too bold for his liking..

Furthermore, there’s no point in using logic to a crowd that isn’t educated in it.. A good debater will adapt his speech to his crowd and in this case, Dis Pater molded that crowd and knows it better than anyone else..

I’ve got a lot of experience BEING an extremist.. ^^

i hope someone, *anyone*, mentions/realizes that michelle is indeed all of the sphinxes right now.

NGL, I’m starting to struggle with reading this due to how well it’s written.
I’ve suffered through emotional abuse, and sadly still do due to my situation… So this is hitting a bit too close to home.
Props to the writing for being so well-done.

The scar he has on his neck..
it’s so suspect..

there aren’t many things that would leave a scar like that, right?

Boy, it’s easy to say the choice is clear when he’s not the one being asked to make the effort or sacrifice…

This is rough because, reasonably speaking, Dis Pater already struck the deal and sold Michelle to the Leader of the Demons in some kind of past arrangement (that’s only now seeing collections now that there is a living sphinx *to* collect). It certainly doesn’t seem like any of the dragons beyond Dis Pater and Maybe Bloodcarver are aware of the deal at all (since he’s only explaining why Michelle’s here now). He is just making a spectacle of it to discredit her.

If he makes her look terrible and discredits her enough, maybe they won’t question the finer print of the deal or what it actually is in it’s entirety if he can frame it as a wicked evil-doer who is getting their just desserts.