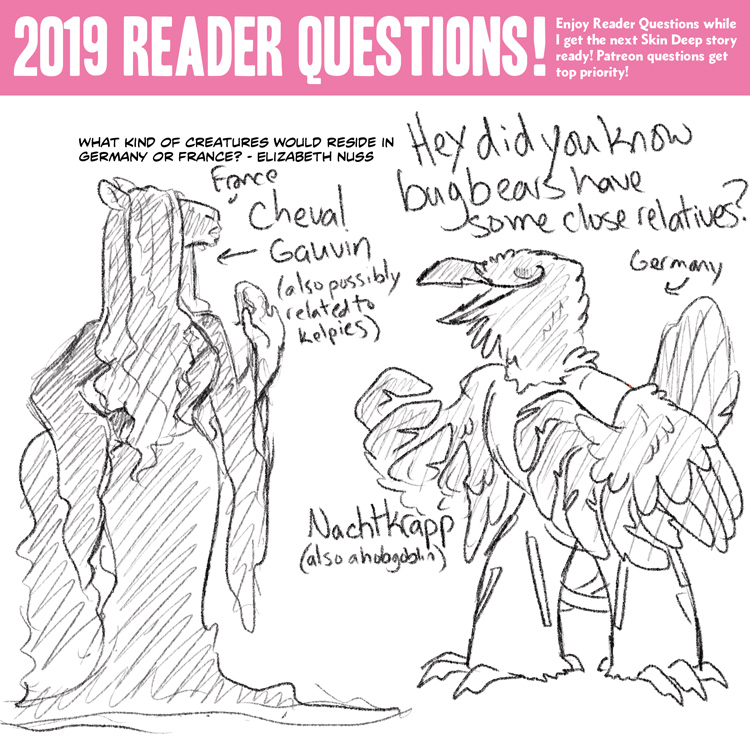 Are Cheval Gauvin and Nachtkrapps actually related to bugbears or do they just fill the same niche that bugbears occupy? Like the last reader question, with the small amount of mythical scientists having to keep everything secret, there’s no way to know for sure how the different mythical species are related to each other or to mundane creatures.

I do like the idea that “being scary at kids so they won’t run away from home” is an evolutionary niche.

Also, if I maybe ask: Does Belgum have an Avalon on it’s own or does it shares with with The Netherlands and Luxemburg?

As a german pushing 40… I’ve never heard of a Nachtkrapp before… :o

After drawing a Nachtkrapp as a commission pic back in early 2015, Kory said that the species is canon in Skin Deep.
Patreon link – https://www.patreon.com/posts/50-patreon-1515218

Neat!
I love learning about new cryptids, and ravens are always a good thing, imho!

Well, they have an entry on Wikipedia, as well as number of folklore and mythology sites, so it’s safe to say that you simply haven’t heard of it before.

Yes, it also mentions austrian origins and names… guess it is more common in the south of Germany (where I’m not from and reside right now).
Curious though, given that mythical beings, folk tales and such where still a big thing in my childhood heydays, that I – and my family, actually – don’t know about it.
It’s cool though… still learning something new and mystical no less! :D

I like your attitude. “Hey, I learned something new today! That’s so cool!” :D

So are corn wolves a real thing in the Skin Deep universe and are they also kinda-sorta related to bugbears?

That’s all well and good for nothern France, but what about the south?
Did some Tarasques survive the Sphinx-Dragon War?
Did they participate at all, for that matter?

We’ve got the dahu, endemic to the Vosges, Alps, and Pyrenees.

South of France has evil horses as well. Lou drapé, for exemple, a white horse carrying children away to disappear forever. As mythical beasts, there’s also the golden goat, supposedly guarding a treasure. Or the drac, in the Pyrenees it is a big red donkey waiting in the night by a bridge to throw people in the river, in Provence it is a winged monster with a reptile body and the face of a beautiful young man,it lives at the bottom of the Rhone river and attract young people with its beautiful voice to drown them. There’s also the vouivre, a cousin of the tarasque, obviously. Maybe they were both dragons? Both were very obviously killed by humans.

As for bugbear, I would say that the really closest to the bugbear in France would be the Beast of Angles in Britanny, a giant bear which terrorised the region and devoured all the cows and their young cow herdresses until it was caught by a saintly hermit and led to the top of the church where it was changed into stone. Knowing the sense of humour of bugbears, that would be a great lark to play the role and just terrify the kids.

Clavel, Aymé and Sand fiction books about the vouivre (called also vaivre, or voivre depending of the place – after all the oi graphem was pronounced /we/ in Burgundy parts), make it an ophidian in the style of Mélusine’s heritage, rather than the wywern-like, Tarasque-like vouivre (called guivre – well the former is also sometimes called guivre, it’s not like the w/g evolution did not happen regardless of the content of the tales).

Also in the vosgian region it’s not called a dahu but a darou (there’s a bar with this name in Saint-Dié-des-Vosges), it may have to do with rhotic r and h disapearing later there.

There are also spirit animals like boars, deers, hares, magpies, wolves, owls (some intertwined with white ladies), cats, and so on… dragons such as the Graoully from Metz as well…

Most of french lore isn’t particularly french (beside 19th “beasts”), but shared with Britain, Spain, Italy, Switzerland, Germany (salamanders or ondines for example)… and even farther the colonial state imported and exported lore as well… so there are totemic camels, mythical lions, orishas, vodun, lwas. I don’t much about them still being believed in today in french-laotian circles, but laotian animated squashes or rice is also quite interesting.

are there any schools for mythics that focus on core curriculum and/or magic for those without medallions?

Could we see some Kākāpō and/or Kea totems from New Zealand?

Are there any insect creature/thingamabobs that we haven’t seen yet?

Question:
Say the people of the liverpool avalon have a foot race. Who’s gonna win?

I bet Cheval Gauvin think their God’s gift to the planet.

other than corvids the Nachtkrapp can also look like a bald Ibis (Waldtrapp), formerly endemic to the alpine region/south germany