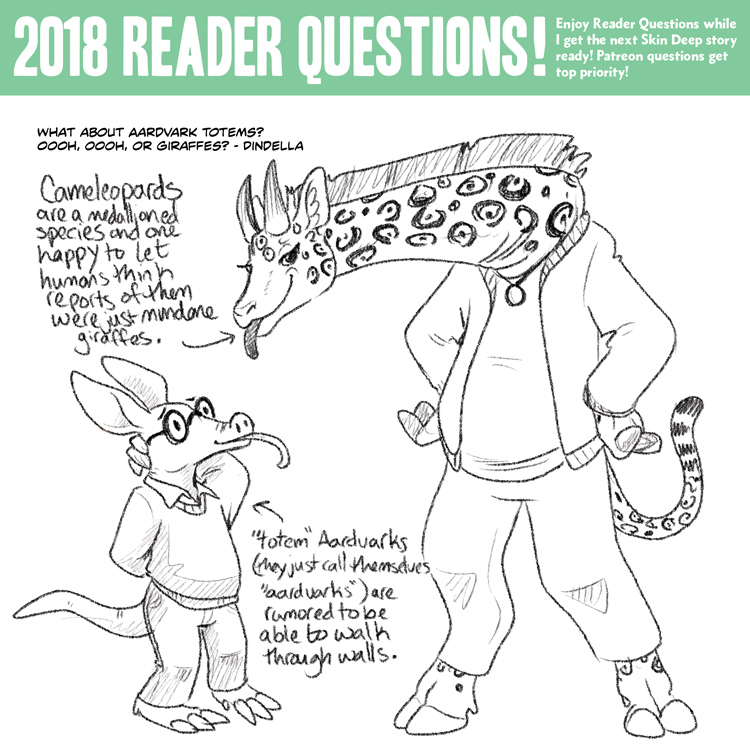 I kinda dug myself into a hole when I described highly magical creatures in the shape of mundane animals as “totem animals” because that’s not really a good catch-all name for them, especially when they show up nearly everywhere except Europe. It does work as an in-universe term since it was invented by European cultures to describe a big class of people unfamiliar to them, I guess. It’s generally not what said creatures will call themselves, however.

I really want to see some Cameleopards show up in a story :)

Kory is that just a picture of old-school Arthur?

i thought the same thing!

Nah, even the old-school version didn’t look that realistic. Outfit clearly modeled after him, though.

I can’t tell if those are spots or tattoos, cause to me they look more like Jaguar spots then leopard spots.

Look at the name– ‘Cameleopard’ = camel leopard. They were a heraldic critter based on somewhat misunderstood reports by Europeans visiting Africa, and most likely leopard-spots were the only things they knew to describe what they saw– I mean, can you think of *anything* else with giraffe-markings?

Nothing that wouldn’t raise further questions.

…..aaaaaand if I saw that walk through a wall, I’d swear off drinking for the rest of my life. OH yeah, big time.

Isn’t it just “camelopards”, without the second ‘e’?

“And I say hey! (Hey!)
What a wonderful kind of day”
that’s a great aardvark!

I see what you did there.

Can you draw a goatsucker?

How about avatar instead of totem? Though totem goes for me, it’s a word used by European explorers over the whole world.

A shy aardvark! Could he be an awkvard? :P

…This combo is making me think of The Laarge Daark Aardvark Song.

Yay, you answered my questions!
The Cameleopard is awesome. It’s also quite intriguing how close the word is to the Afrikaans name for giraffe – kameelperd. It translates to camelhorse, which actually makes less sense than cameleopard. :)