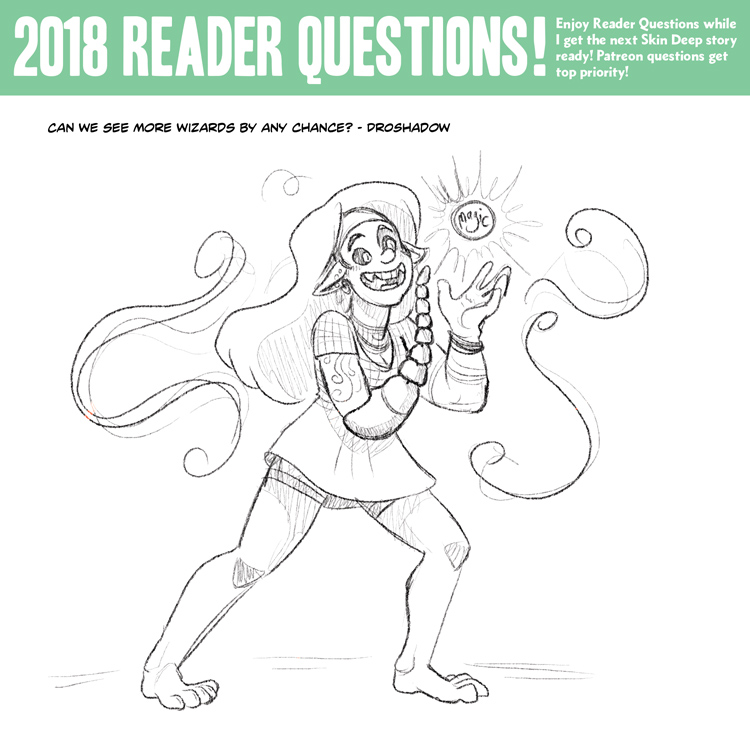 Unless you’re really really lucky and good at magic, magic is gonna make you look a little weird in unexpected and unwanted ways. The tentacle arm prosthesis was her own decision though. That thing is rad.

If she is, I am wondering, might she be the apprentice of the sorcerer on the Greek island Avalon, Ophelia was from?

I absolutely love her

I would love to see an Axex!

This still leaves SOOOO many questions about magic. There a so few established rules about it in the skindeep universe, I’m real worried it’s gonna turn into one of those “why? -because magic” scenarios, with little explanation, and fewer justifications. I just REALY don’t want that to happen.

Consider the amount of quasi-bullshit answers to questions that is”because magic” in common global folklore, legends, mytho-histories and more…. Kory opting to go ” cuz MAGICK!!” would only be so apropos.

Really, it’s only because our common stories are more character and plot relevant, rather than story and moral relevant as was common in the olden day, even if the moral is “were better than literally everyone else so fuck that guy in particular let’s go raid his shit!” We expect better of the story and find loose threads annoying.

Seriously “classic literature” could be called “classic fanfic.net” and still be correct.

In short, if kory pulls that lame card, she will just be pulling that same shit classic literaturists have been doin since clay tablets and weed rolls.

You’re not wrong that classic literatures writers did pull largely the same bullshit, but you forget they (some of them, at least) at least had rules like “who can do what.”
Look at Greek and Roman myths. Anyone with any powers we might consider “magical” were either a deity or descended from a deity. No normal mortal could have those abilities.

And I’m not too worried right now, as magic seems to not have come hugely into play, being that we’ve only seen it in the medalions, the griffins Ravi has given powers to, and Tim creating that door into/out of the avalon.

But frankly, that last one bothers me, cuz all he did was draw a sigil on the ground and say some latin phrase along the lines of “go away earth, create door!” The rules for the medalions are rather clearly established, and the griffins were given powers by an ancient nigh-immortal being. Those one’s I’m okay with. But it still doesn’t explain how ‘normal’ humans have gained access to magic. If they all can, why hasn’t everyone? Why is it only Tim and a few others? My issue is less with the specific details, and more with the origins.

Realisticly, Tim is nothing more than a nod to Monty Python’s Tim and not truely a central character. Outside of the bit with Anthony way back, how often has he really shown up?

Kory’s world of course, but historically speaking there are differences between Wizards and Sorcerers, dispite the two terms being used interchangably today. Wizards do what you suggest, learning rules and specific formula and applying them in ways to produce magical effects. The scientists of magic, basically. None have appeared yet in the comic, that I recall or reconize.

Tim is described as a sorcerer, and sorcerers are much more intutive when it comes to magic, tending to lean heavily on their own magical bloodline and will. Essentially, a sorcerer throws out energy and tries to sculpt the desired effect out of that wild magic with their will. For a sorcerer, exact rituals and formula are unnessasary, and are followed only as methods to focus their will and improve chances of success and discarded when such focusing is unessasary, such as with routine spells like the Door thing. Classic Merlin was a sourcerer, his bloodline stemming from Morgan LeFey (A fariy as I recall) and acted much in the same manner as Tim; using rituals and materials for some more difficult things and abandoning them altogether for routine or casual acts. We don’t know Tim’s bloodline, but it could be any number of near-human creatures from Myth, dilluted through the generations.

It’s an explanation, at least. Not nessasarily Canon.

I second this! Ugly Christmas Sweaters for Michelle and Co!

Why is it so easy to receive mutations from playing around with magic, but a spell to change somebody into a normal human is supposed to be permanent? You’d think every sorcerer would cast such a spell on themselves as a safety precaution.

I think we’d all like to wish our dear friends here (including you, dear Bing) a Happy Holidays!
What are some of the cast’s favourite memories/traditions?

(I also didn’t know if I oughtta include this in the main question, but;
We don’t really know much about Dis. Are the Azreal, Mikhail, and Damien having a nice holiday?
I admit I kinda hope so. . .
‘kay, sorry for the wierd add-on, bye!)