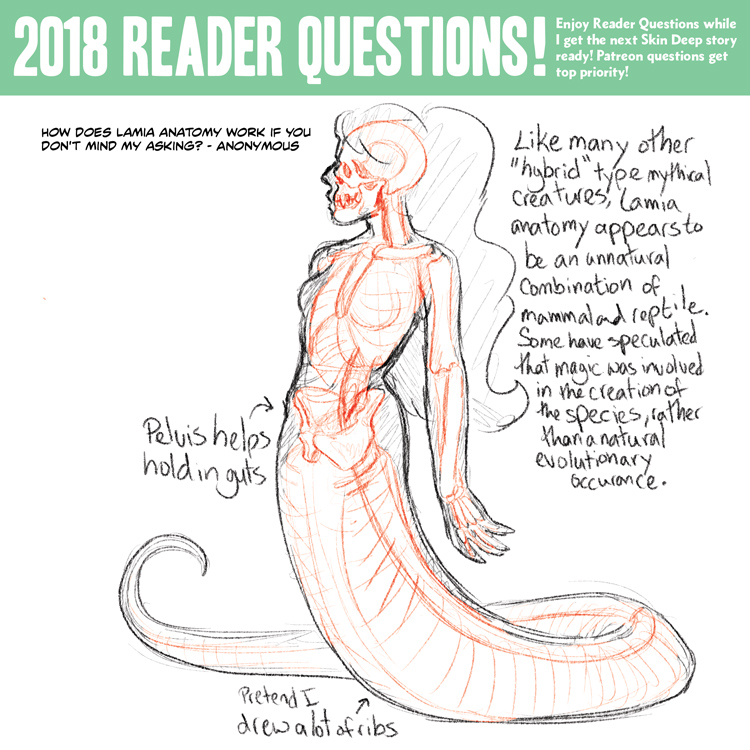 Magic might have something to do with establishing a lot of the various mythical creature species in Skin Deep. Natural evolution doesn’t really account for things like Centaurs or reptiles with mammalian characteristics and hip bones but no legs.
—
We’re at the last half of the Skin Deep Illumination book Kickstarter, and it’s almost funded! Let’s get it all the way there!

That makes me think about where (most of) a Centaur’s organs are located (being a Biologist student myself) – sheer nightmare :D

some of where might be findable here :) http://www.dorkly.com/post/86896/centaur-med (two doctors answer the unasked question of: where would you defib a centaur?)

That nightmare’s part of why I don’t like the fusion approach to these sorts of hybrid creatures, but it’s Kory’s story to explain how she likes. They’re not human, and even if parts of them look human externally there’s no reason it would have to conform internally.

Take a Centaur. They’re huge, to put it mildly. There’s no way a human-sized Heart and Lungs could support a body that size, But a horse heart and lungs could almost certianly support a humanoid torso on top of the rest of the body. Particularly if we go with the idea that Centaur tend to be a touch smaller than the breeds they resemble. With a heart and lungs in their horse-half that’s perfectly able to support the entire body, what need is there to have lungs and a heart in the human-half as well? None I can think of, I’d expect that much of the human-half in a centaur is muscle and bone, perhaps with a kind of gullet or crop in the upper chest, where the heart would be in a human.

Same idea, Naga and Merfolk also have no need to conform to human anatomy just because they look human-ish on the outside. More than half of a naga’s length is the snake-tail, with plenty of room for all kinds of snake-like organs that can fit in it. Similar case for Merfolk. The Pelvis’ secondary purpose of being an anchor for organs is kind of unessasary when the organs run the entire length rather than just stop there, most of them would be resting on the ground anyway and supported by the (many) ribs. And of course the Pelvis’ primary purpose of being an anchor for the legs is unnessasary in legless species.

Makes me sound too much like I’m nit-picking Kory’s explanation though. I’m really not, just explaining how I see such species working. Not as a human mashed together with something else, but rather as their own thing that evolved in their own way.

Centaur lungs in particular represent probably the largest issue in their biology. Assuming their lower half has lungs as big as a real horse, the tiny orifices in their human-like heads simply cannot provide enough air to the lungs. They’d be spending their entire lives desperately trying to gasp down enough air, and would likely pass out if they tried running for any significant amount of time. Yet, if they instead had much smaller lungs they would be perpetually fatigued and low on stamina due to the poor oxygen supply, they certainly wouldn’t be the incredible runners that real horses are.

Their best bet would probably be to have some large secondary nostril on the lower human abdomen area, but I’ve never seen this feature on any depiction of a centaur. Ultimately, their lung capacity probably just has to be hand-waved as “it’s magic.”

As for a snake lamia, based on snake anatomy, they don’t generally need such massive air intakes, and might get by with human orifices. A lamia would probably be a pretty heavy breather but not so desperate for air as a centaur. They would probably have secondary heart, lungs, liver, and kidneys in the snake half, but for the most part it would be almost pure muscle to support keeping the humanoid upper-body perpetually upright. Unlike a centaur, their main digestive and reproductive systems could potentially be mostly contained in the human half, which would explain the human pelvis that “helps hold in guts.”

> As for a snake lamia, based on snake anatomy, they don’t generally need such massive air intakes, and might get by with human orifices.

The base metabolic rate – and, thus, need for oxygen – in (endothermic) mammals is usually ballparked as EIGHT TIMES as high as in comparable (exothermic) reptiles.

Extra breathing vents on or around the connecting line between human and horse halves on centaurs would make the most sense to me as well. Its something that has been done before in at least one fantasy story. (not for centaurs specifically, but other large beasts)

Actually, most of the critters in the Avatar film have these extra breathing openings, either on their neck or chest.

> what need is there to have lungs and a heart in the human-half as well?

Well, snorkels are limited in length and diameter by safety regulations for a *reason*, and the extra length of trachea wouldn’t be any different from a biomechanical POV.

Of course, you *could* put a second (part-)face down where human and equine parts meet. I guess that having to look way *up* into your vis-à-vis’ eyes while his *voice* comes from about chest level would make for interesting humancrobatics during conversations … ;-)

True, I neglected the Dead Space thing, and to be honest the first thing I thought of was the game. Since suggesting the bellybutton some art depicts as being a third nostril seems absurd for several reasons, perhaps Centaur instead have a significantly stronger diahphram than others species do, to keep air moving dispite the longer trachea. Or perhaps their trachea isn’t ridgid like a human’s is, some manner of regular muscular contraction along the length keeps air moving. Hard to say, but fun to think about.

Also beat me to the Lamia thing. Exotherms enjoy significantly lower metabolic needs across the board, and pay for it in having virtually zero tolerance for temperature extremes. Not having to constantly spend energy keeping yourself warm means you simply don’t need as much oxygen, food, or water.

I always imagine that much of a centauroids human body is filled with their larger that human lungs. Possibly having two hearts, with one providing the brain with oxygen and the other supplying their horse part with blood. Also their esophagus would extend all the way down to their stomach in their lower half. Their diet would likely be omnivorous in the very least, rather than herbivorous like actual horses. On lamia i suspect that their internal organs are in the human half with their tail being mostly muscle. Im also pretty sure that such a being would have a cloaka bellow where human genitalia would be located. That would also explain how such entities could interbreed with other species, since males are rarely mentioned when dealing with serpentine and piscine humanoids

Since we are on the subject of internal stuff how does a chimera’s digestive system work. What I mean is do you have to feed the heads separately. like all the heads have separate stomachs or something? Arg now I am confused about my own question.

Chimera I’d presume have a main head in charge of eating while the others serve mainly as extra appendages, kinda like Gorgons (aka Medusa) and their snake-hair. On the classic Lion/Goat/Snake (And sometimes Dragon) one the main head would probaly be the lion one, and the others keep watch on the surroundings while the lion’s distracted eating.

In any case, I don’t imagine the heads would need to be fed seperately at all, since they’d all share the same stomach/s and draw nutriants from the same body. Even if any of the heads could eat (Which would make for a nightmare of piping, with three/four different esophagas all leading into the stomach from different directions and having to wrap around things like the spine and the pelvis), only one would have to.

Or, chimeras could operate like human conjoined twins. The Hensel Twins each have their own head, spine, heart, set of lungs, gallbladder, small intestine, and stomach. They share a pelvis, ribcage, bladder, and everything else. So it could be possible that each chimera head do need to eat, and take turns keeping a lookout when doing so.

Speaking of evolution, or the creation of a mythic species…what are the prevailing creation myths among the various mythic peoples? Say, for example, where did gryphons come from?

Now I wanna see someone turn into a Naga and freak out cause they don’t have legs anymore.

there are various transformation stories on deviantart for that

I now wonder about how exactly swimsuits work in this setting.

well bikini tops would work normally for most species, on the bottoms maybe they could be like pencil skirts? Perhaps many aquatic species simply have no nudity taboo, since fabrics that arent affected by water are fairly new?

That’s an easy one. Try a Centaur. Two ribcages still hurts my brain.