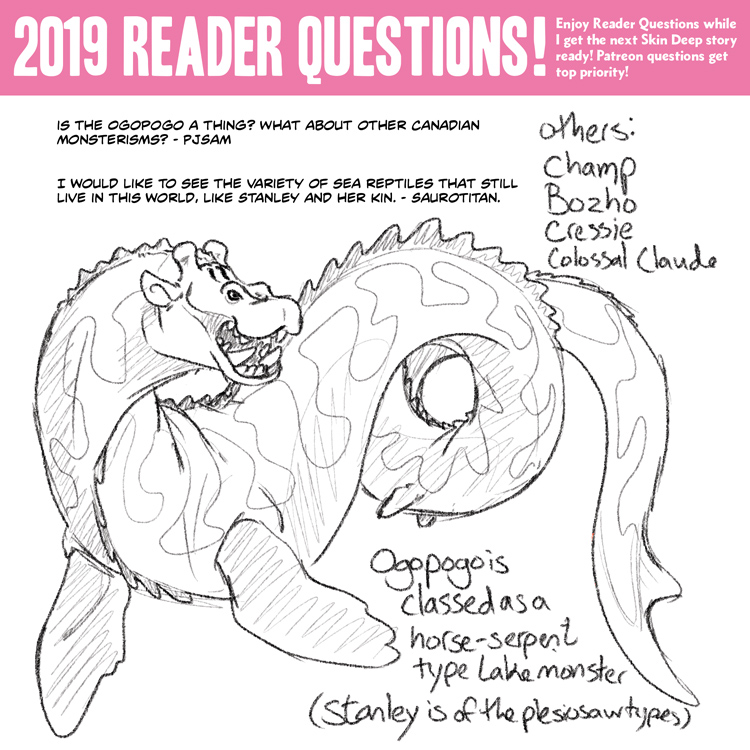 Despite living in the ocean, Stanley is technically a “lake monster” since her kind is nearly always found in lakes. There are several different varieties of lake monsters, but the most common are the ones like Stanley that are shaped more like a traditional plesiosaur, and then there are some like the Ogopogo that are often called “horse serpents” because they have a vaguely horse-shaped head and long snake-like (or whale-like) bodies.

Sorry to disappoint you but all the sightings are, are massive Pike on their courtship runs, actually been proven

Next up come the dwarves, elves, and kobolds. Like I said, local legend speaks of Kobolds

I’ve seen you asking about kobolds a number of times over the last few days and I’d like to advise you to tone it down. Kory reads the questions and answers the ones she’s interested in answering. If she wants to address kobolds, they’ll be addressed. Bringing it up on every new RQ page isn’t going to make her more likely to answer the question or change its priority.

Your name says Chaos but you are imposing Order.

What other lies have you weaved within this web of yours?

I was actually worried this would happen. I was unsure if only questions from the most recent page were considered, so I kept putting up the same one. I’m honestly embarrassed that it came across as so petty on my part, and ask for forgiveness.

Hey i’m sorry if this is a dumb question, but why has every come page from before the 19th of this month vanished? It goes straight from the 19th of this year to 2018. Were they taken down, or are you on haitus?

They haven’t been taken down! You can get to them via the links on the page. The way the site is built, when Reader Questions are running, the navigation buttons only go through other reader questions, and when Skin Deep pages are running, you only see Skin Deep pages. This is so people reading through the comic won’t get interrupted by months worth of reader questions every time I’m on a break!

That is spectacular website design by the way. It took me a bit to get used to, but it is superb. :D

Hah, I’ll have to keep a closer eye out for Champ next time I’m up at Lake Champlain then!

I laughed when I saw Champ’s name up there. I love that the USA has our own Nessie. :)

Are there any Fungoid creatures?

Are there any creatures that would be defined as “fey?” like elves or gnomes or brownies