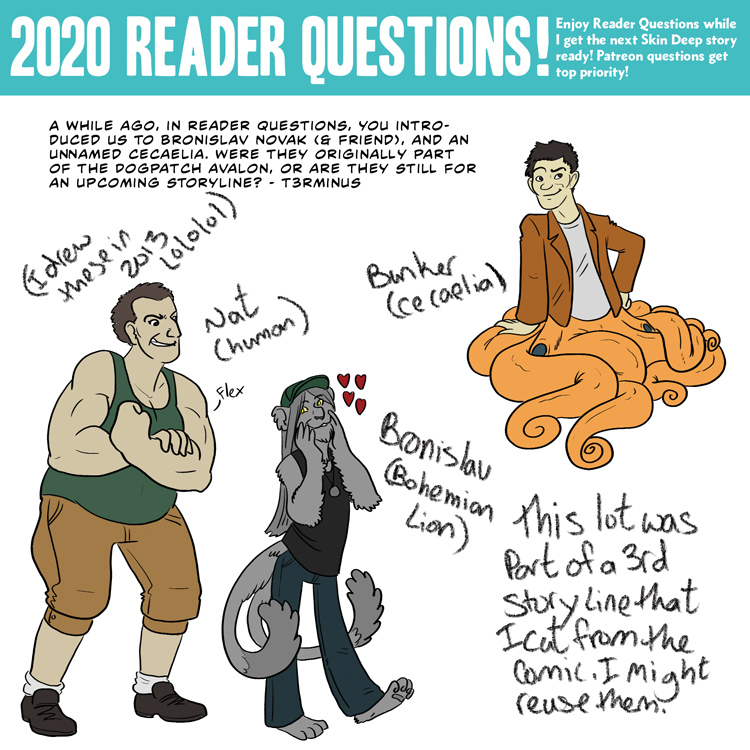 At one point there was a whole “Third Cast” that I realized needed to be cut out of the story because it was already so bloated with stories and characters, and those characters were part of that crew. Maybe I’ll reuse them in a future story some day! No character design ever really fully dies. This art is from a 2013 drawing I did of the cast, which shows you how long ago they were cut, hah hah.

If Kory ever did a one off ep. with them I would not be disappointed ( つ ◕_◕ )つ

How does did the original cast (Jim, Greg, Mariel and Michelle) react when their college teacher(s) first talked about mythilogical creatures like themself?

what do the cast think of furries? (I know that our fandom wasn’t as big in the 00s. but let’s say years later when they hear about it)

I’d like to clear up some things about harpies… I’ve heard people say they’re all female and people say they’re not, both with evidence from the comic, so I’d like your final word on that! You mentioned a couple questions ago that they’re an all-female species so I’d assume that’s teh correct answer?

Quick question: can we see a bear totem? A brown bear (or whatever is convenient)? I can imagine a limberjack bear strolling through the woods like a Disney prince with all the woodland critters

Oh, I’d been mentally dividing people up a totally different way, not putting Hank Feebay in with Michelle Jocasta, for example, as they never meet or really interact.