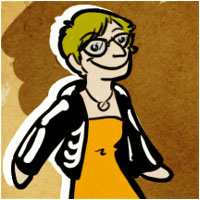 Kory Bing was born three days before Halloween in 1984 and she’s always held a small grudge against her mother for not holding out until Halloween because that would have been just so cool. She was named after a Harry Chapin song but her parents made up the spelling because they liked the letter “K” more than the letter “C”. After growing up in a river valley outside of a small town populated with 600 people, she moved two hours south and lived in the Ozarks for a few years, and now she lives in Portland, Oregon with all the other cool kids.

She lives with her husband Ben, a wonderful cook with an awesome Czech surname, and their stupid black cat Eisenhower, who isn’t very bright, but we’ll forgive him.

You can see more of Kory online at:
• Tumblr
• Twitter 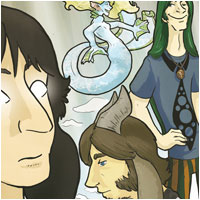 Skin Deep was thought up in the early 2000s by a teenager with too much time on her hands and access to the internet. After many many years of noodling about, waiting until “the right moment” and discovering that the “right moment” would never come, the first page of Skin Deep was posted on the internet late in 2006 and has been updating semi-steadily ever since.

Skin Deep was born out of an interest in mythology, folklore, music, world-building, and the idea that things are often more than they seem, and that it is easy to hide secrets when nobody is expecting them.