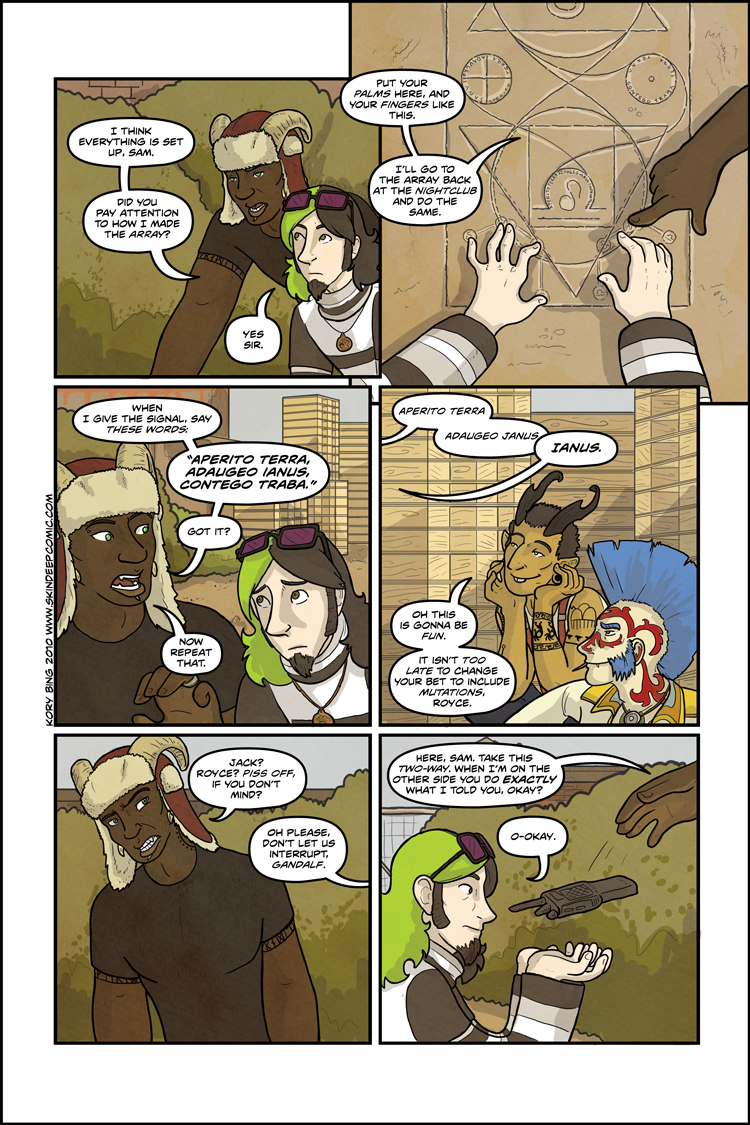 What does that spell mean?? Google Translate has it as being Latin, meaning “Open the add table succor shield”

Terra is Earth the planet or earth the ground, Ianus is the same as Janus (the two-headed god of the new year) because the Latin I was pronounced as a J, (so I don’t know how he’s being criticized for saying a J instead of an I…) and as for the rest I can only speculate. Perhaps since aperito is like aperture (Let’s see, Google, what does aperture mean when it’s not on a camera? Oh, a slit or a hole) it might mean something about opening… so aperito terra could mean “I open the earth”(as in an earthquake, I’d wager). Adaugeo sounds like adage, which is a saying… maybe “I speak of Janus”? Contego could be context… or setting… and traba is almost definitely work because it looks just like the Spanish word trabajo. I… set work? Set at work? Set the scene for work?

Using Google Translate word for word, a bit of thinking and reasoning with what happens after, I’d settle more for something like “Open the land, add a secret passage and cover it with wood”. That’s since “ianus” can also mean “secret passage”, “adaugio” would be add, and “traba” could be board, table, or ship, so it may be loosely used as wood. My biggest problem is with “contego”, which means something like cover, shield, restrain, or reinforce, and must refer to the covering the tunnel gets so it doesn’t collapse, but I don’t know how to fit it better in the sentence.

No, actually, in Latin, i was pronounced i. i and j were the same letter, which could be a vowel OR a consonant, and made the same sounds that ‘y’ generally does now. (as in: reallY, Yuck.) The differentiation came about to indicate whether it was being used as a consonant or a vowel.

Then English came along and decided that i should make the sounds ‘ih’ and ‘eye’ and screwed everything up.

Janus was not just the god of the new year but also of doorways. Something to do with being able to see into two places (like if you stood in a doorway, you could see two rooms). So it makes a lot of sense to call on him for making some sort of door.

That’s a lot of balance symbols y’got there

I haven’t read any further, yet, but I’m going to guess that they are trying to open up a doorway between two places? Janus is an interesting God. I hope that there’s Gods, as such, running around in this setting… (also: Unicorns are actually real, and exist in nature, as scientific fact. There was a type of rhino that only had one horn, and that had somewhat more horse-like features than a modern rhino; that co-existed with humans, and there are also rare examples of animals who’s horns have been injured at an early age, causing them to grow a single horn, in the middle of their heads. There have been at least two **recent** examples, and one still living, of actual unicorn animals.They’re not a “species”, as such, and they’re not horses with incongruous horns–although there could certainly be unicorn-goats, but, they definitely do exist, and apparently they always have, since whenever those types of horns first evolved, potentially.)