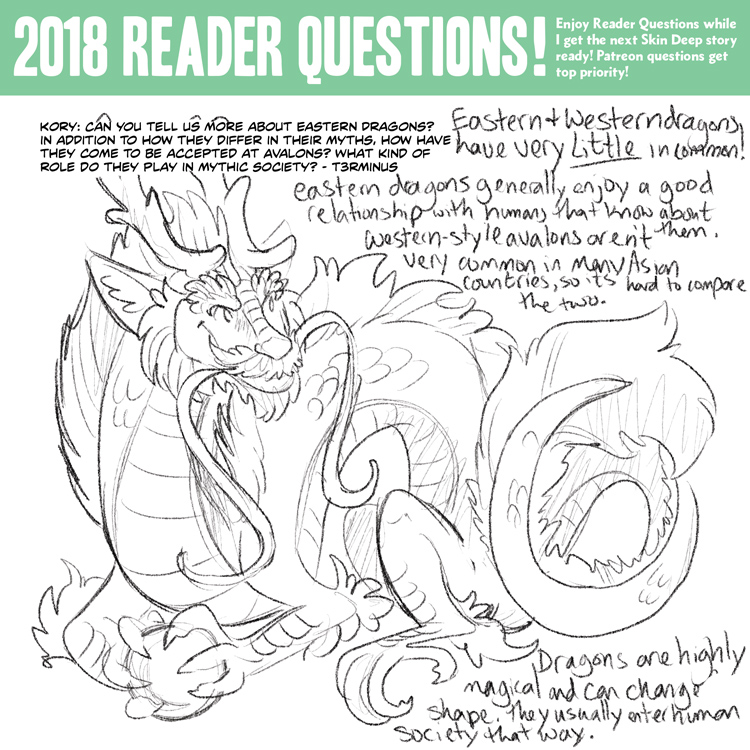 Eastern Dragons are called “dragons” but they aren’t very much anything like Western dragons on a basic level. The predominant mythical “culture” is heavily based on European, Middle Eastern, and Northern African mythical creatures, and things like medallions and Avalons and such are mostly limited to the creatures that come from those areas of the world. So it’s not super fair to compare that with most Asian creatures, because they work on wildly different rules! You’ll see a heavier population of western mythical creatures and cultures in areas that have a high European population, like Hong Kong.

i really would like to know if there are german avalons, and if yes, how do they look like?
(little fun fact: Germany is more then just bavaria)

Considering that it’s easier to hide on a ship than on an airplane, I’ld guess that the most diverse avalons in Germany would be found along the coasts, VERY PRONOUNCEDLY NOwhere near Bavaria. ;-) (It would also explain a helluva lot of Seemannsgarn.)

I’d also think there could be an Avalon or two in the Black Forest! This would definitely explain the one or other fairy tale set in it :V

oh and, this is a really good explanation of the eastern dragons, and now i am wondering what they thought during the great war (which somehow sounds like a mythical world war)

I wanna see more of these noodle friends!

Kory, can we please see some magical toys that only the kids of the mythic community would have access to?

Okay, now that we (kind of) know where the difference between mythical animals and their plain cousins are, there’s another question that bugs me.
How the hell can they keep secret from the authorities? We know that mythical beings send their children to a normal school when they are able to, so at least the administration offices have to know that there is someone, even if they don’t know what exactly they are. How do those critters deal with the day-to-day stuff that comes with living in a heavily bureaucratic society?
Also, if they administration offices know of them – which they must considering the mythical critters deal with normal humans on a daily basis – do they simply assume they all live in a big Hippie-Community when regarding the Avalons?

Asked by: Someone from ‘Bureaucracy first and foremost’ Germany.

Are you only counting dragons we know are alive in the present era, or have you forgotten the arrogant lady who threatened Jocasta and Wosret?

Eastern and Western dragons always seemed like completely different creatures to me. I really like Western dragons myself. I have come to respect Bloodcarver, but the design of the one I can’t remember her name that is all forelegs, wings and tail does not appeal to me. I’ve seen so many dragon designs that I have come to expect that everyone that thinks about dragons thinks they are something anatomically different I fear I have a more hard core view. I kind of wish that there was a way for dragon fans to point at an example and say “That is a dragon” Bloodcarver is my favorite idea of a dragon. I’ve made people angry with this thought process before so….. hopefully everyone remains calm here.

Ooo! What about a Bearded Vulture Harpy?

How are eastern mythicals that immigrated to the west treated in Avalon communities? Are they unwelcome, or do they try to hide from western races in order to better maintain their own disguises?

I think they are welcomed because I don’t think we would have seen some of the eastern mythicals we have seen so far if they were mostly met with unwelcomeness and discrimination.