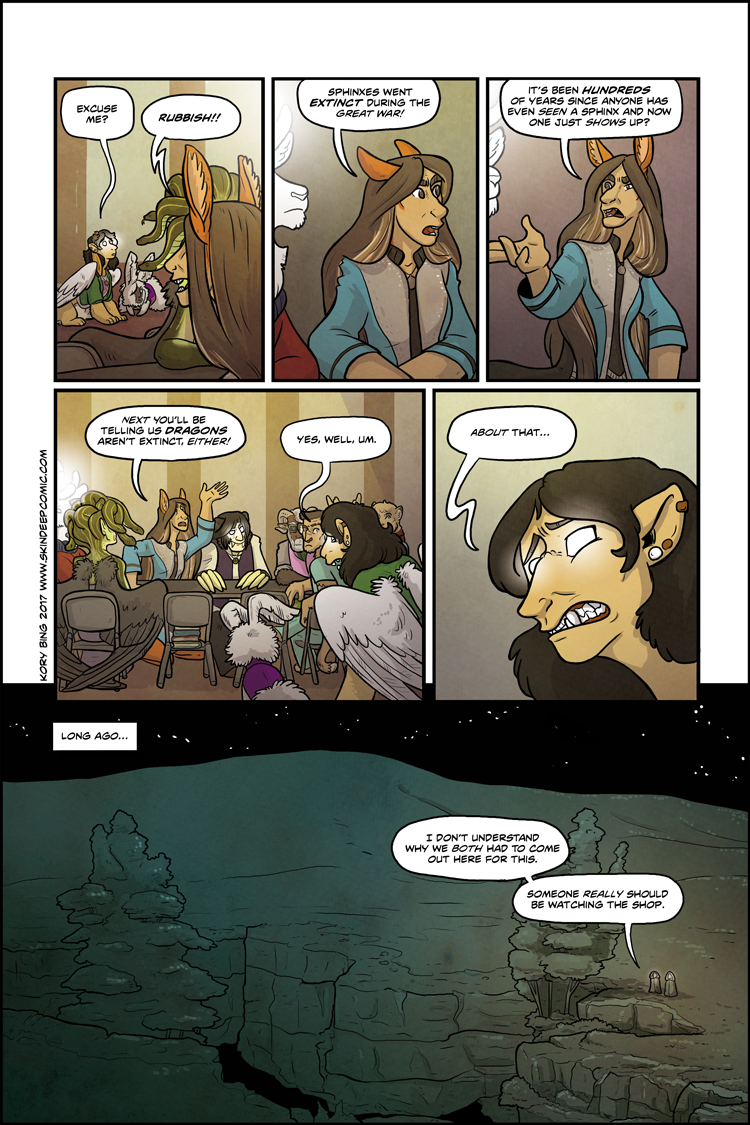 If you’ve been following my twitter, you may have noticed that my computer got TOTALLY jacked this week and after trying to troubleshoot all the problems I eventually had to do a full wipe and restore, so I lost SEVERAL days to that.

But this morning I got my computer fixed! And I was able to finish the page on time! Heck yessSSSSS.

Also! My Woot shirts are now for sale for the foreseeable future! I thought the one week they were on sale would be the only time they’d be available, but I’ve been informed that you can still get them now! 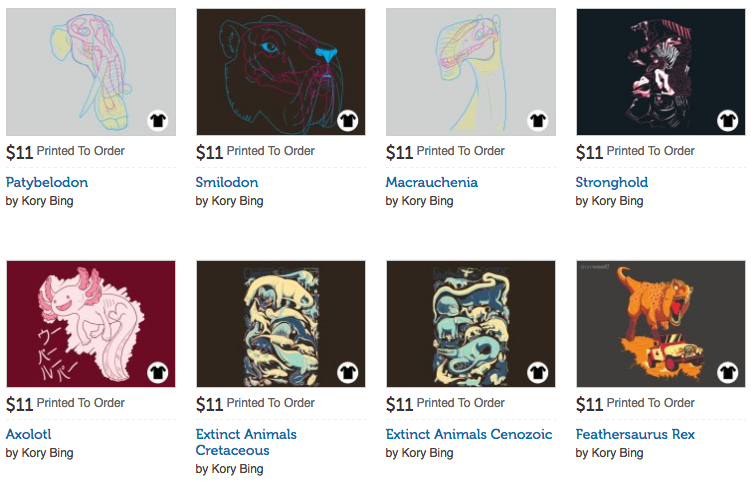 Why not? The abyss is pleasant company, always meeting your eyes when given a passing nod.

As long as you don’t stare.

… still have yet to win in a staring contest with it…

This is just a SWAG, but I suspect they’re on their way to the original opening to the natural cave system that would later be enlarged under the Finns’ home that’s not there yet.

Oh God, Jocasta is making a deal with some Dragons isn’t she?

Or trying to find out why the dragons hate them so much.

We’ll know in a week’s time.

I’m just afraid of Jocasta owing a dept to someone and Michele having to pay it.

It may be being paid already, if all of them die young…wasn’t there some comment about early deaths, or am I misremembering?

I can see that going wonderfully.
Jocasta: “Excuse me, good sir, but would you mind explaining this feud we have going on?”
Dragon: “…” *steps on them*

Miss Indignant Centaur-lady (Centauress?) here is probably reacting how a lot of us expected the Council to react. With reasonable disbelief.

Kind of species-ist, but wouldn’t this make the centaur a neighsayer?

She needs to get off her high horse and quit horsing around. She’s getting that information straight from the horse’s mouth.

You need to pony up some new words. Trying to get new puns from the same one is just plain foalish.

Knock it off. You’re just beating a dead horse by this point.

Lady horses have just as much attitude as the lady dogs who have lent their names to the way some human females behave. First Ike’s mom, now this mare, nice to see the horse like peoples are also horse like in their attitudes.

I would understand her skepticism if not for the fact that Michelle is standing right in front of her in full form. Also, if this was a scam, wouldn’t they be asking for something? Wouldn’t their “Sphinx” have rehearsed a little?

As far as they know, it could be a very good act.

No doubt the bug-bear could see right through it, but even he doesn’t know what a sphinx “feels” like.

There’s always a skeptic. Has nothing to do with gender. …o.O

In any given group, there’s going to be at least one person that’s more skeptical than average. It’d be kinda unusual for *everyone* to just accept Michelle’s identity within seconds of the reveal. I’m actually kinda surprised that there’s only one skeptic so far!

If Ms. Centaur knows what she’s doing, and isn’t just being skeptical for the sake of it, she might be trying to get more information out of Michelle, prodding her to verify her own claims as it were. I may or may not be giving her more credit than she’s due, though. We’ve only just met her and she honestly just seems to be the kind of person who isn’t easily convinced about anything.

Plus Michelle’s dropping a bit of a bombshell here, it’s no surprise that it’s a tough sell immediately after seeing it. I expect that after the flashback, should they continue to believe Michelle, the council might be sent reeling at the implications of sphinxes being a thing that still exists.

Somehow i think that they will meet with bloodcarver, i mean he is several centurys old

How does one go about proving something of that magnitude? Forging a new medallion on the spot?

Or maybe if you’re vindictive, UNmaking someone’s medallion with the lightest of touches.
Of course, that would be unbelievably cruel, unless having your medallion unmade, rather than destroyed or given up allows you to get a new one…

Perhaps she now knows how to repair a medallion, that would be a neat party trick. And we do know a few people who need their medallions repaired…

Lots of folks defending the centauress as simply being a skeptic, but that’s not wholly true. She’s being confrontational about it and making snap judgements. The wonderland rabbit-thing, can’t remember what it’s called. He’s being a skeptic. Doubting, or at least not accepting it on face value right away, but investigating. Trying to verify or question.

Too often people equate skepticism with disbelief. Someone who disbelieves the incredible, outright, is the same as someone who believes the incredible outright. They’re both beliefs, founded only on supposition without evidence or fact. A true skeptic is one who doesn’t jump to a conclusion, and investigates doubts to ascertain the truth, whether it’s genuine or fraudulent. SOme deride this as being a wishy-washy fence sitter, but really that’s the position you start from in keeping an objective and scientifically minded perspective.

Just remember that not everything is 50-50. Always staying exactly in the middle, and presenting everything as an even debate, is false neutrality and it becomes particularly egregious when there’s heaps of data and evidence supporting one side. Objectivity accepts truths, whatever they may be, so while you start in the middle, sitting on the fence, as a skeptic eventually you should start to lean to one side or the other as evidence comes to light.

GOod example of this, the rabbit-guy is getting a closer look at her medallion. All medallions were crafted by sphinxes, they’re all ancient heirlooms and no new ones have been made. While it’s true they can be damaged, unless the medallion is one of the oldest faceless ones, ones with minted images always depict the true species.Altering that image would mean altering the shape of the medallion, which we’ve seen is considered ‘damage’ and will affect the spell, so defacing an existing medallion into a sphinx shape would likely damage it beyond effective use.

Besides, Madame U is an expert in these artifacts, it wouldn’t take her long to verify the authenticity of her medallion and confirm that it’s a sphinx’s medallion.

These are avenues of investigation a skeptic might take, to determine if Michelle is or is not a spinx. The centauress is just flatly saying she believes Michelle is not.

What you don’t know won’t hurt you . . . nearly as much as something you know that is wrong. Mr. Magoo’s true handicap and his greatest sin was to assume that what he thought he saw with his imperfect vision was true and thereafter bend everything to follow his initial misconception.

His name is Barnaby, and I think he’s just a sapient rabbit. But yeah, there’s a big difference between needing good, solid evidence to believe something and just outright rejecting it. The former is the basis for rationality and science, the latter is the basis of pointless, heated arguments.

Can I just bemonan once again how one can’t upvote comments? Because I just love how you presented your whole argument, Vinny <3 Calmly, rationally, in a flawlessly logical manner and you convinced me 100%

You’ve reminded me of a belief scale I came up with a while back for rating conspiracy theories. it was inspired by those vocation-preference tests that had the subject rate tasks on a 5-point scale: love / like / indifferent / dislike / hate.

My version is also a 5-point scale: believe / suspect / wonder / doubt / disbelieve. Different people can of course be expected to disagree as to what’s obvious fact or blatant nonsense.

It almost looks like they’re growing out of the centaur’s forehead in the first panel and now I can’t stop seeing that.

The awkward moment when you find out a powerful giant reptile and magically gifted cat/bird-people are still around and are able to destabilize your current government structure has arrived! Hooray!

taking bets that the bloodcarver isn’t the last dragon

That’s obvious from his own words. He mentioned his wife, and identified himself as Second to The Father. That implies a community at least comparable to a small village.

ah you right, i went back and re-read issue 5 and thought “that father” could be a non dragon that the bloodcarver works for he mentions that the Sphinxes have been gone for as long as he’s been alive meaning he hatched after the war

It’s Standard Operating Procedure for any dragon in battle to tell the opponent “I’m the last of my kind.” If he loses the fight, it at least helps take the pressure off the remaining dragons.

The rumors of our extinction are greatly exaggerated

I haven’t seen JeniSkunk post since I made my rant, and Jeni, I didn’t mean to chase you away or make you feel uncomfortable commenting here. I was frustrated, and I just wanted you to think more about what you were posting before you posted it. Your tendency to oversell Patreon and try to correct jokes or opinions could bug people, but you’ve also contributed a lot of good stuff to the comments, and you clearly love this comic. I’m sorry if I made you feel unwelcome here.

Kory, you can delete my rant if you want. I mean what I said, but I was in a bad mood and I think I over did it, and I don’t want to cause drama on your site.

Mind if I add my (unasked for) two cents?
While JeniSkunk really was a little annoying with some of her more grating comments and Dementron echoed my own thoughts in that rant, I DID enjoy the small tidbits JeniSkunk brought (and miss them) I think slightly toning down the advertising aspect of her comments would be more than enough to make everything A-OK, what do you think, everyone?
Also, Kory, I don’t suppose you would retract your request not to mention Patreon-exclusive content here..? Please? If I ever become able to support my favorite artists like I wish I could, I definitely will – I promise – but in the mean time I was really enjoying those free little tidbits from Patreon and only (slightly) minded the manner of their delivery.

I agree with this. The last thing I want is anyone feeling unwelcome in the comments section, and a lot of the Patreon info was interesting.

I wish it was still questions time, so I could ask you to draw Aztek from D.C. Comics

So from a D&D perspective, a sphinx is no good as a thief. Those eyes light up the night!

Little tangent for a second:
Is it so unreasonable to claim to be as mythical as you are? How can you say what’s real and what isn’t when you yourself are inherently a myth to ‘the mundane’? As entertaining as being a ‘mythical being’ to mythical beings is, anyone relinquishes the right to the title by existing alone. The nature of the term has become unfounded and remains only as a colloquialism.

But her disbelief is definitely justified by the rampant presence of Avalon shenanigans. Their mischevious reputation is well deserved.

I like how the bugbear is the only one smiling here :)