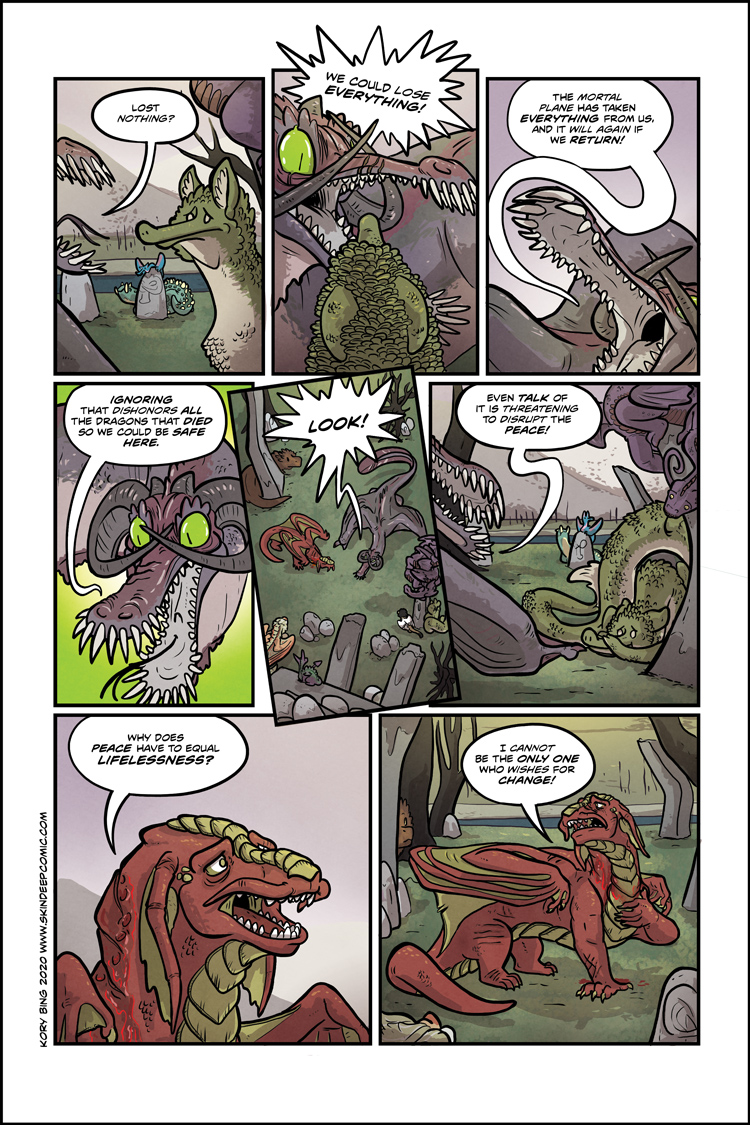 The green dragon’s name is officially Nudelschlange! She is a German lindworm. That might be her canon name but the Skin Deep Discord has named her Jubilee and I think that is very cute so you can call her that too if you’d like. (You can join the Skin Deep Discord via the link on the Extras page!)

Happy Thanksgiving, fellow Americans! I hope y’all are staying nice and isolated and celebrating the holiday responsibly this year. I’m making a recipe my mom usually makes so I can still have the Taste of Thanksgiving even though I won’t be spending time with my fam.

Pleas for change and improvement shouted down by an old idiot in a position of power.
I see some things transcend species.

-stares at panel 6 father carving in the distance-

I’m trying really hard not to see a dick there, but oof that is an unfortunate head shape to have drawn on a rock and then have detail scaled back on.

(Oops, meant to make a new comment, not reply to yours. Oh well! x_x;)

“here you have the freedom (to obey ME) and the honor (to serve and be punished by ME). why would you want anything else?”
“the mortal plane will take everything you own (your dependence on ME) stay here and be nothing, it is safer”

how easy it is to read narcissism in what he says.

I wonder if there was a specific event that made him like that, prior or during the war, if this attitude is a product of trauma, culture, upbringing or natural inclination (ie general character and his personal choices) ?

@W. – This definitely sounds like years of trauma and anger that started before the war due to envy of other species getting medallions, and which got worse during the war after seeing fellow dragons die, to me.

I am not excusing them. But I’ve seen similar behavior in relatives who were deeply traumatized when they were young.

Ah of course, the good old “if we change stuff it wouldn’t be fair to the people that are dead”

This is a unique situation in which they Could go ask. :P

lol, yeah, good point. Not that the angry spirits of the dead may not be just as, or even more resentful, but still!

She is Avocado in my heart, and in yours too. Canon cannot take that from us.

First name is just German for “noodlesnake”, by the way.

Well seeing how dragon is salmonsnake in Finnish, Nudelschlange isn’t that different. XD

But yes. We will definitely go with this one.

If her name was Jubilee Avocado Nudelschlange it’d abbreviate to Jan, rather than Naj. Which may or may not be better.

I respect her too much to call her “Miss Nude”, so Jubilee it is. Here’s hoping that her “fire breath” takes the form of fireworks. ^_^

On the Thanksgiving front, I use Discord, my niece uses Skype, my sister uses some Google-owned video chat due to work, and mother has a hard enough time using a cell phone. A “virtual dinner” is not in the cards this year. >_<

[expects her to go by the nick “Vermicelli” online, and to breathe sugo all’arrabbiata >;-> ]

Okay, at first I was getting big Heavensward vibes. Now I’m still getting a good bit of them, but much less. Gods, Nidhogg was more of an understandable villain (One of the higher-up dragons, a negotiator, was killed because one dragon, Nidhogg, thought of himself better than the Ishgardians. Nidhogg could not control his rage and lost himself, which lead to the Dragonsong War.). But this guy? Oh I want to beat him up (among other things).

Hi, yes, I’ve unfortunately dealt with narcissists like this before in my life. It’s… not fun.

Let’s get this straight, Spoilers for Final Fantasy XIV:

This is the true account of the beginning of the Dragonsong War.

The People of what would become Ishgard followed a meteor as it streaked across the sky, and built their kingdom in the land of Coerthas. The Dragons who already lived there were somewhat miffed. Peace was found for a time because of the love found between Hraesvelgr, one of the Seven Great Wyrms, and an Ishgardian woman, Shiva, later known as Saint Shiva.

In this brief peace, Ratatoskr, another of the Seven Great Wyrms, was invited by the King of Ishgard, Thordan, to speak on behalf of all dragons that lasting peace may be found. Thordan asked specifically about her brood-brother Nidhogg and she answered truthfully that Nidhogg believed that humans were not capable of protecting the world, and only the seven great wyrms could fulfill the oath of their father, Midgardsormr, who slumbered deep in Lake Silvertear.

Hearing this, Thordan and his Knights Twelve did not seek to kill Nidhogg in a misguided bid for peace by proving they could overcome a Great Wyrm.

They slew peace-loving Ratatoskr and ATE her eyes, the source of her power. When Nidhogg quite rightly came to slay The Knights Twelve and the Betrayer-King, They laid him low with their stolen power and gouged his eyes out to let him limp away to die, not even granting him the dignity of a warrior’s death. Nidhogg crawled to his brother Hraesvelgr who, not wanting to lose two siblings, granted Nidhogg one of his own eyes to continue living. The Betrayer-King and his surviving Knights lied, and said that Nidhogg’s attack was unprovoked. That war lasted for a thousand years, shaping the very base of Ishgardian culture.

(The Lv.80 quest, spoilers, is all about honoring Nidhogg’s death, as well as what he could have been had he not let his rage wholly consume him, as it did.)

I didn’t go into detail (also because HW was years ago) on purpose.
(Also don’t forget the consensual vore between Shiva and Hrae.)

Was simply saying that, at first, I got similar vibes… And now I just see a narcissist who I want to punch in the face and worse.

I will say, tho… Props to the writing. To make me and others hate a character this much and portray the narcissism so well? It’s good writing.

Thordan I, the Betrayer-King, was slain in the first battle against Nidhogg. It was his son Haldrath who took Nidhogg’s eyes. Haldrath himself, and the surviving knights, were also not responsible for the lies that spread; in fact, Haldrath himself abdicated the throne and chose to atone for the role he played in what happened, by founding the order of Dragoons to defend the people from the revenge the dragons would exact. Four knights died in the battle, and Haldrath and three other knights decided to go their separate ways. Only four of the surviving knights returned, forming the four High Houses.

It was the church that whitewashed the events of that day, from the accounts of the returning four. They made Thordan I a holy visionary seeking the “Promised Land”, and Nidhogg a terrible foe who attacked unprovoked as they attempted to build the Steps of Faith. They also claimed that Haldrath had only taken one of Nidhogg’s eyes, in order to hide that they had a secret weapon for their own use.

It’s important to note that we have no idea whether the four returning knights had ill intent or not. Based on Haldrath and the three who left, it’s clear that the knights were shaken by the events, and quite aware that what they had done was very wrong.

Perhaps one or two tried to make the account more favorable towards themselves and the king, but ultimately it was the church, people who had no part in the incident itself, who fabricated an entirely false story in order to put themselves in a position of power. If it had come out that their holy king had acted in malice and greed, the people would surely have not sided with those in power… but by making the dragons a hateful enemy, they could bolster the peoples’ reliance and loyalty more than ever. They would have a “just” cause for striking down those who spoke against them (by claiming they were enthralled by dragons, or betraying the people), and could bring those most loyal into higher standing.

But let’s not be one-sided here, as the same thing was happening on the other end. Nidhogg was imposing on the Dravanians (dragons) the same thing that the church was on the Ishgardians. While he may have had a fair reason to retaliate against Thordan and his men, and used truth as his story, he still subjugated the Dravanians in a very similar manner. Those who would not partake in the violence were deemed traitors and killed.

Oh dear now all I can think of is “schnitzel with noodles” (guess it would really be Schnitzel mit Nudeln, at least according to Google Translate). And knowing how US entertainment works, it’s probably more of German thing to have it with noodles, not Austrian.
Even more important, does Nudelschlange enjoy nudeln?

They hurt Blood… now they are yelling at the poor cute little Nudelschlange. Now I am mad. I hope so badly that something bad happens to Father. Even the other dragons wanna live happily.

Can I just say – thank you for making all these dragons so different and unique from each other! <3

the guy is like LITERALLY all mouth, these panels are great

Don’t you shout at Jubilee you overgrown gharial-faced wyvern!

As an aside, I’m guessing he conveniently left out the part of of the Dragon/Sphinix war in which the whole thing was started over being refused medallions. Since that would kind of conflict with his current narrative.

If I understand correctly that’s something which Michelle *knows*. Could be something to mention.

Can someone turn that salty sea wyvern into filet o’ fish already? Thanks.

Definitely seeing that trauma now, yep. Gigantic survivor’s guilt produces terrified fear of losing anyone else percolates and rots over the centuries into an abusive, hyper-controlling personality that cannot stand a single bit of deviation because IF THEY DO IT DIFFERENTLY I COULD LOSE THEM, without seeing both that he’s hurting the other dragons, and driving them away, and making the situation worse.

Dis Pater is losing the argument.

My earlier prediciton stands: he will go both BUG! and FUCK!

I point out that as the last of the Sphinxes, Michelle inherits the total power of her species. Dis Pater is in deep trouble.

A power that she barely knows how to control.

When Pater attacked the Bloodcarver, if she knew how to shield or turn away the attack, that would have been the time. A sphinx defending a dragon?

The Bloodcarver is also a bit on the injured side – even her healing him would be seen as a positive.

Instead, she’s on the sidelines.