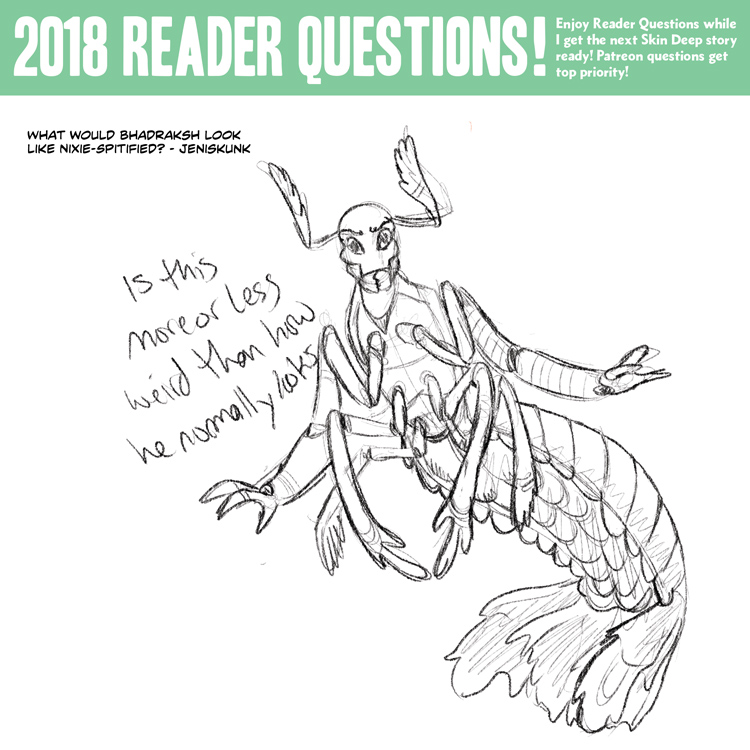 I haven’t shown Bhadraksh without a shirt on in the comics, but he’s got a weird anthro-mimic bug body structure thing going on. Don’t mention the movie “Mimic” to him, he doesn’t appreciate it.

I’m at GenCon this week! If you’re going to be at GenCon, come say high! I’m in a huge booth with a bunch of other great creators!!!!! On Friday and Saturday I’ll be signing my GenCon-exclusive Rick and Morty comic cover over at Oni’s booth! Exciting! Come say hello!

so basically a giant shrimp.

Bhadraksh the mantis shrimp.
Very cute Kory :)
If anything, I think Bhadraksh looks better here than his usual appearances in the comic.

Are there companies/groups focused on moving mythicals and their nonhuman stuff across the globe? Maybe having secret networks of hiding places and safe havens for mythicals scattered in places that lack proper avalons. I so can see privately owned cottages and warehouses that just sit empty, until someone with proper contacts needs a temporary place to stay. General populace just ignores them as vacant buildings.

I wonder what Nixie spit would do to regular animals like Dogs or Cats.

They turn into catfish and dogfish of course! :P

Kory – Could you draw up a list of mythical community percentages? Like most common species to least? (discounting totems, cuz you already said they’re proportional to their equivalent animal’s population.)