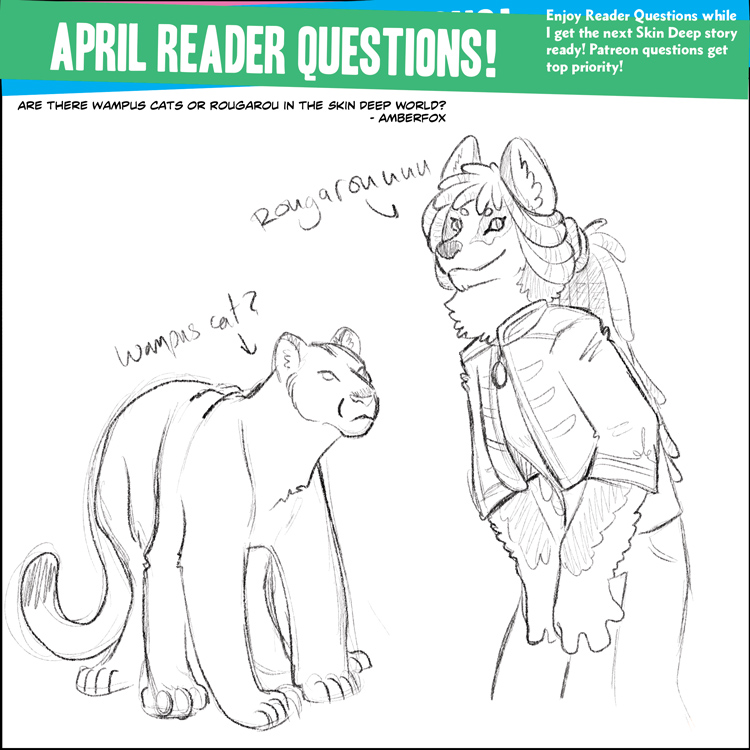 This comic’s original post was lost in a site crash. This is a repost.

But… rougarou = loup-garou = werewolf, which is confirmed to not be a thing in Skin Deep…

I’m not personally an expert (or even an adept) on folkloric creatures, but I imagine there is a difference between werewolves and rougarou.

Firstly because people simply wouldn’t use the different names anymore, ’cause screw that amiright? This is the same reasoning for why we don’t use a bajillion words for vampires.

Secondly, and more importantly, the meaning of werewolf has changed over time. These days it usually refers to a sentient, intelligent, being capable of switching between wolf and human forms, or of switching to a large humanoid wolf from wolf or human forms.
Rougarou, however, has not changed as werewolf has. It still refers to a wolf-ish human-ish beast that was once human, but is now a creature possessing little intelligence, sentience, or sanity. It makes up for this lack with a deep hunger for human flesh.

Third, and most importantly, rougarou are not said to be able to breed. A new rougarou is made when a rougarou soreads the curse to a human through some bone-chillingly easy method, or when a human is cursed by some magical being (usually a witch, it seems) to become one.

I’m not sure how much of this is actually accurate given that I’ve spent less than an hour researching the rougarou. The general sense of it seems to be that rougarou are kind of like what werewolves were like a few centuries ago, but spread their curse much more easily and act less like wolves that aren’t afraid of humans and more like a blue shell in Mario Kart. It’s coming for you. It will find you. It will find you and it will devour you alive.

This is. . . Very cool! And makes me fear that sweet looking puppy-lady. Before she reminded me of a friendly doggo I’d want to pet.

I don’t think you need to fear THIS Rougarou, I think she’s essentially a Cajun totem creature, and a stylish one at that!
Fear that Wampus Cat. He looks… Displeased. That’s probably not a good thing.