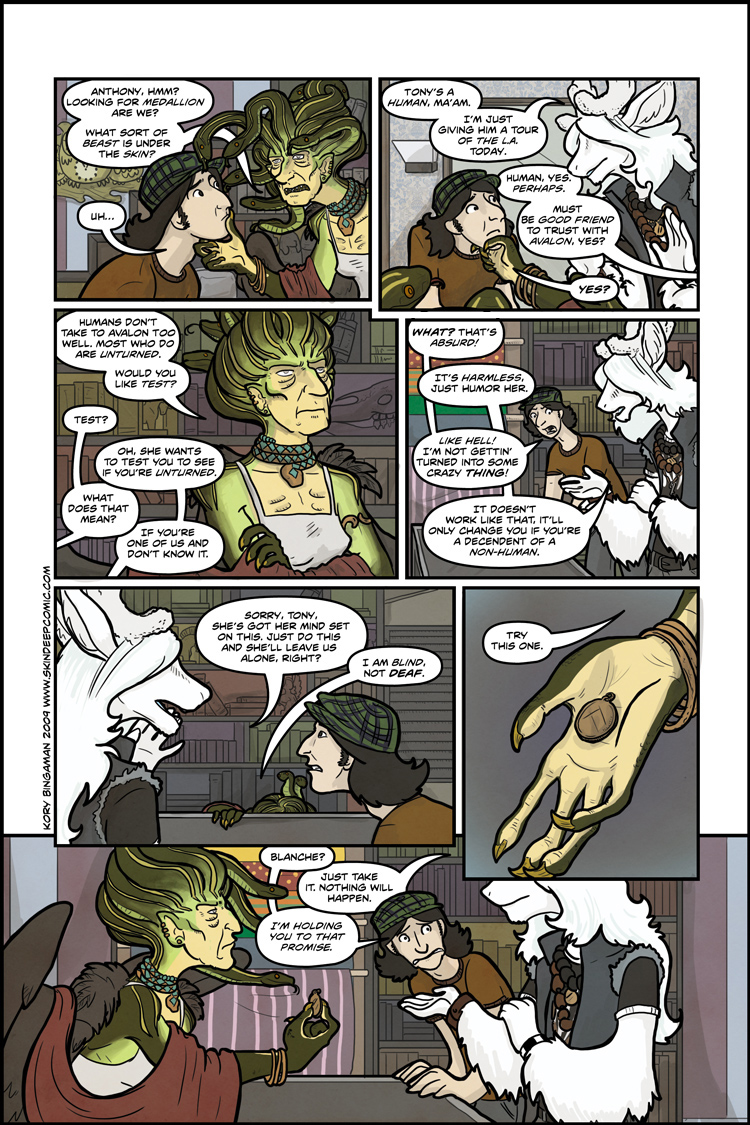 Forgot to mention this earlier, but I really think you have an awesome style and concept here. Everyone is so diverse physically, and the number of personalities your filling in really grabs me.

I’m with you on this one. Kory’s world just keeps on getting more interesting and impressive as it’s fleshed out. Having the imagination to come up with these ideas and the artistic and storytelling ability to turn them into a comic takes a LOT of talent and determination, I’m sure.

You know, I never thought Gorgons had wings until now…

Traditionally they had wings and tusks.

I like how she’s a red-sided garter snake type gorgon…thing.

Love the Illidan reference there. Well if it isn’t an Illidan ref still love your comic. ^^

So, wait can she see with her snakes or is she completely blind?

Only four years late to comment. Yes, she can. Though snakes are very nearsighted.

“Just take it. Nothing will happen.” Unless, of course, Tony really is unturned. Blanche is being awfully confident about something he can’t possibly know.

I keep reading through here and thinking of something I want to say, only to realize I already said it a long time ago.

If most people who take well to magic turn out to be unturned… is it perhaps the case that most people in general are unturned, and the ones who freak out just never find out about it?

After all, magical creatures breed freely with humans in this universe, and whatever genes carry it not only remain undiluted, but seem quite resilient as well. When Jim was first explaining medallions to Michelle (who is a different subspecies from her father… could the Grecian form be on her mother’s side?), he seemed to be saying (or at least not *not* saying) that offspring produced with aid of a medallion will probably not be human. A ridiculous number of people can claim direct descent from Genghis Khan, and that was relatively recent and just one guy; the various species here have had potentially thousands of years more–in some cases *each*–and they’re spread out all around the world. Given enough time, pretty much everyone would have something else in their ancestry. Humans, as we understand the term, could be extinct.

Michelle is NOT a different subspecies than her father, she is a female sphinx and he is a male sphinx. it’s just sexual dimorphism…..
(other than that, what you’re saying sounds pretty on point to me)

This raise the question of what happen when two (different) unturned found a family.

A possibility (not really genetic, thought, but would explain the proportion of humain, and rarity of cross breed) would be that both inheritance cancels each other -> humain again.
with the issue of the difference between human form and unturned

Perhaps when two unturned of different species have a child, the child is a hybrid of the two species? Which would most likely render them infertile, which could account for the apparent randomness of men and women being unable to produce children?

Actually (late to the party again), Kory has established that the offspring of two different species will take after the same-sex parent. Using Blanche as an example, his father is a White Stag, his mother is a Peryton. So, since Blanche is male, he’s a White Stag too. If Blanche were a woman, she’d be a Peryton, like her mother.

Late to this party, but this isn’t true. Look at the Finn kids; they’re all male but Tobias is a common gryphon (like his mother) while all the others are opinici (like his father). This would be the case in species that can only be male or female (a white *stag* is probably male-only, for instance, and you have satyrs as all-male and fauns as all-female), but in the main you just roll the dice and one creature manifests over the other.

Whether they still hold the genetics of a different-species parent is possibly up for debate, given what Jim said about bloodline dilution, but it seems commonly accepted that a child will be the species (assuming both are mythical) of one of the two parents regardless of how weird their family tree is.

Some of the instances we’ve seen were same-sex because they’re one-sex races. Satyrs and white stags are all-male, while harpies are (usually) all-female. With other creatures, the offspring can take after either parent. Jim’s brother Tobias takes after his mother as the only common gryphon out of the four brothers (the others are opinicus or maned gryphons, which are all-lion except the wings and beak). Michelle takes after her father (this isn’t really a spoiler, we’ve seen him as a sphinx in her dreams). Perytons can be male or female, so Blanche easily could have been a peryton instead, but a peryton mother and white stag father couldn’t have a white stag daughter (not counting intersex or transgender shenanigans). You are only guaranteed (more or less) to have same-sex matchups when both parents are one-sex races, such as a satyr and a harpy. Hybrids are almost unheard of. (Almost. There can be exceptions to any of this because magic.)

When it comes to responding years late, I figure the person I’m responding to will probably never read the response, but other readers are bound to have the same questions.