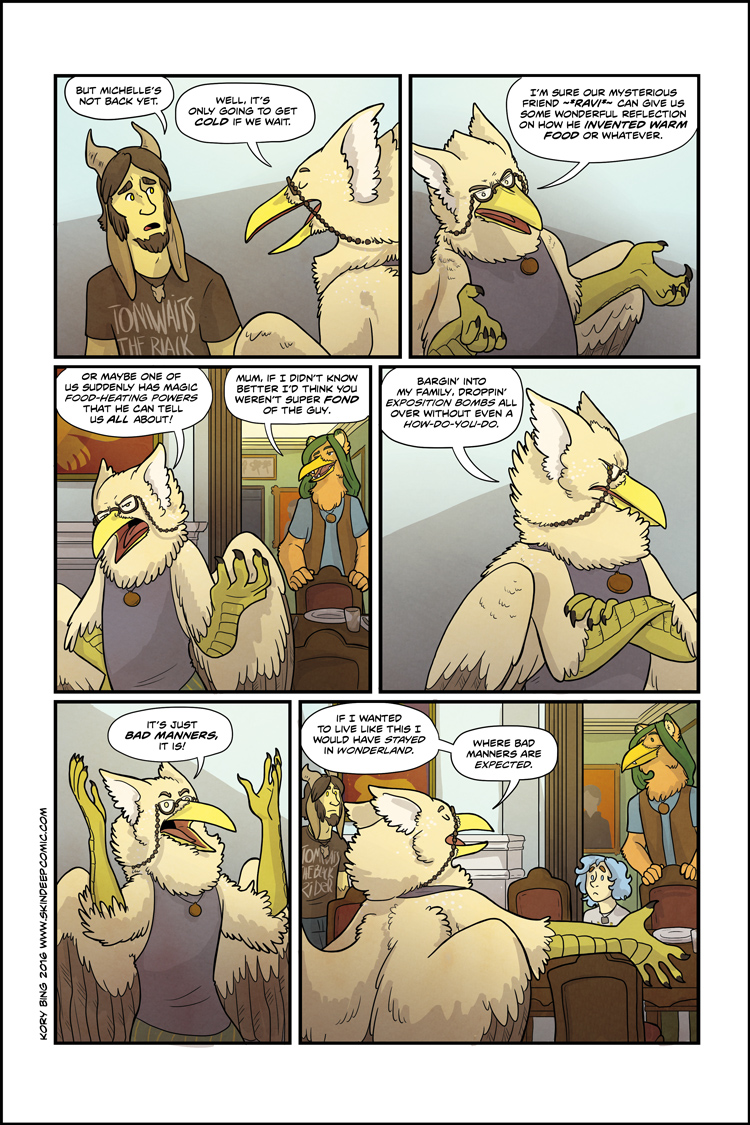 The second to last page of this chapter woah!!

You can almost see the mom essence steaming off of her.

Lampshades all over the place, I love it.

And I love that Mary makes an exposition while complaining about all of that exposition.

I think Kelekona is mistaking Mary’s derisive versions of Ravi’s expositions on the abilities of various Finns, and on his personal involvement in L.A. history, for actual story exposition.

Personally, I would love it if it turns out that Tobias has the fire aspect of Ravi’s ‘gifts’.

That she used to live in Wonderland.

I thought we already knew that.

sorry, I don’t know I ended up responding three times

That tidbit has been on the Exchanges cast page for quite some time.

He got her monologuing!

And, yes, she does seem to be skeptical of his unsubstantiated claims, and irritated by his ‘gifts’ to her family.

Mary’s palpable grievance is wonderful. I see where good ol’ Tobias gets it from.

It’s very interesting indeed, as it gives us some insight as to the general behaviours in Wonderland.
It seems that the Wonderlanders we have seen in the story, so far (Mary, Eleanor, and Rupert), are very UNrepresentative examples of Wonderlanders.

It sort of makes sense, too, in the sense that, given the implied xenophobic attitude of Wonderlandian culture, the least representative members of it are the ones who skeedaddled away from it all.

(I so hope we see more of Eleanor and Rupert in the future, they’re adorable.)

Oh the floofiness of it all

Only one page left this chapter? I smell cliffhanger.

On the next page someone’s going to crawl out of the caves wounded and covered in blood.

This is gonna be one hell of a cliffhanger

Look for Ravi and the others running desperately out of the caves followed by a huge round boulder.

With a face engraved on it – which is not then recognised as Ravi’s, but then he changes form to one with that face, and everyone /does/ recognise it.

“This is the appearance I chose when we built the caverns…”

Man, I love all these guys! Esp. Mary right now!

Is it just me, or does anyone else want to live in Wonderland? <3

I think it’s just you.
I’d definitely not want to move to live in a place where bad manners are expected, Where there is a constant threat of personal injury due to wilful neglect, and where the residents view outsiders with unbridled xenophobia and racism.
http://www.skindeepcomic.com/archive/question-6/

yeah I remember that question. And that kind of makes me want to live there more just for the sake of seeing what it’s like :) I mean, a place like that is perfect for someone as weird as me ~

I’m sure you’d ‘enjoy’ a vacation there – but then you’d get to leave. Otherwise, far less fun.

I find myself wanting to give Mary a comforting hug.
But I wouldn’t, as it would probably be taken wrongly.

“Not super fond of the guy?” Nice one, Jim, seeing that those words are coming out of your mouth. I recall in the Avalon a certain “cursed” gryphon angrily floofing over close to the same reason. Also, being lectured and accused of willful neglect over a gift that no one has had for centuries and no real explaination about said gift would not bode well with me either

I heard Jim’s voice loaded with sarcasm, based on his expression and body language. Also based on his being Jim.

Jimmy is just happy to see his mom is on the same wavelength as him wrt. Ravi.

Oy, Mary has traumas about quirky characters who spout cryptic nonsense. (No wonder at all since she grew up in Wonderland!)

Nooooo, not the end of the chapter, I’ve grown too used to having my Skin Deep fix on Mondays! Here are cute puppy dog eyes to convince you to keep going!

Not Cool! says the arachnophobia who was reading this before going to bed. Not cool at all.

Thank you for the warning! I almost clicked on the link myself.

FYI, a -phobia is an irrational fear, itself; the person who fears irrationally is a -phobiac or -phobe.

Mary, today must be a rough day, eh?

I sort of have to agree with this sentiment. While I don’t think Ravi would be my favorite person to have around either, he *is* giving you what you asked for.

As the saying goes, “The lady doth protest too much, methinks.”

Awww; Colin looks sad. “Mum’s unhappy; who can I throw water at?”

I am reminded of a comic strip where a human tries to make small talk with an alien living on Earth. The human asks the alien if his home world was a nice place. Alien responds, “Well, I’m here, aren’t I?”

P.S. The previously mentioned Mrs. Finn reminds me of Michelle when she found out she was a Spinx.

I just noticed Griffy-Mom’s shirt is open-backed to allow her wings to be free. Nifty design. Also, she wears glasses. I guess that means she can only read a text book from a quarter mile away and not at a full mile.

I think you got that backward. More likely, she can read it a mile (or, at least, a furlong) away, but not a yard away. As I remember an uncle saying, “My arms are getting too short [to hold a book at the right distance]!”

Mrs Finn – Grow Up – noble families don’t get to be precious like that. Your family does not have a right to be irritated, offended, or anything but apologetic. They have epically failed many, many people. You do not even know how badly they screwed up – people may well have died badly or lived in misery as a result of them not upholding their duties with their magics and whatever else they were guarding. Now, the Finns are upset because a super powerful wizard-deity-thing did not caper just the right bow? What petulent self-centered little brats they are. That’s age appropriate for Colin, the rest have no excuse.

Scruffy, your post is a Headdesk Error.
1. The ‘gifts’ which Ravi applied to the Finns, back in the Middle Ages stopped working in new generations of Finns after Ravi returned to India. So the Finns had to work out how best to do what they were tasked with, without the benefit of those ‘gifts’
2. Mary left the Wonderland because of the behaviours of the residents.
3. Ravi has made a number of claims about his direct personal involvement in the History of the Founding of the LA, with no solid proof to back it up. That, on top of his revalations about the ‘gifts’ he’d applied to the Finns. Noisy bad manners grandstanding. Ravi’s behaviour is a direct, slap in the face, reminder of all that she had escaped by leaving Wonderland.
4. Mary is trying to keep things calm and sane in her family, in spite of the ongoing teasing between the various members. Colin having the water aspect of Ravi’s ‘gift’ has just turned the job of keeping the peace, even more difficult.

Maybe Scruffy was just trying to get into the local spirit of finger wagging admonishment… and critically engaging cartoon characters as if they were real people in the physical world?

Do you think it makes Kory sad when people weave homilies in defense of the personal honor of fictional characters that she created? It would make me sad.

Dude, ease up. She can’t be faulted for her ancestors fucking up? Like, she doesn’t /know/ jack about the whole magic/prophecy/etc bull. It might even have been willfully forgotten, and so far everyone who’s supposed to offer an explanation has been ridiculously cryptic.
Michelle’s ghost dad has given literally nothing useful, the shrine thing just gave vague impressions of happy dancing colorful people, and Ravi is running around sprouting random bits of disjointed information and getting angry when people forgot about his “gifts”. Said gifts which so far have only served to make Jim’s high school life miserable and not much more.

I think, if anything, Ravi should be shouldering a good part of the blame. He hasn’t checked in on the Fins – MORTALS, unlike him? – in forever. As far as we can understand, he went in there with one of the ancestors, set up a big, magical /something/ that is ~very important~, and then fucked off for a few hundred years. And he comes back and basically expects everything to still be like it was before? Or, really, he came back but he didn’t even bother to check. He set up a shop, apparently met Jim a couple of times since then, but didn’t even think to ask him “hey, dude, looks like you got the plant magic. How’s that treating you so far?”.

If someone like that barged into my house sprouting disjointed bits of information about my children being magical, gave my youngest, hyperactive kid the ability to generate water bombs out of almost anything, and then demanded to see the precious crypts that, as far as I am aware, I’m supposed to keep outsiders OUT OF, I would also be floofing angrily.

I think you meant “spouting”- the sprouting is Jim’s to do.

Wonderland might be fun for a bit, but I think it has to wear on one after a time. I think Mary appreciates the finer things in life, certainly.

Finer, maybe.
Calmer, quieter, and more polite, I would venture to say most definitely.

You can just see Colin think about moving to Wonderland in that last panel.

Either we’re gonna get a cliffhanger… or Ravi’s right behind her, grinning that grin of his.

If flying reindeer aren’t real in the fictive logic of Skin Deep, does that mean that the Gummi Bears _are_ real?

Because if the Gummi Bears aren’t real, I’m totally going to lose my shit.

The Haribo candy Gummi Bears, and the Disney cartoon based upon them likely both exist in the Skin Deep universe.
But gummi bears as real beings… not a chance.
The candy was launched in 1922. It was based on real trained circus performing bears.

…So, how does this translate into Jelly Babies? *gets back to knitting an impractically long scarf*

Magic food-heating powers? All right, fess up: who brought the microwave

Woah you’re series is so good!! I hope I can draw as well as you one day!

The one complaint I haven’t heard from Mary that I’ve been expecting: “Just what I really needed: someone to come in and teach my rambunctious and impulsive son water magic.”

Mary: So Ravi turns up, starts telling us about powers he gave my family without any training, boasts about all the good he did for the Avalon, basically turns my already stressful life upside down, and I’m supposed to stand on ceremony when it comes to supper? Not likely. Jim, stop trying to grow those Brussels sprouts and pass them to Colin.

wow your good at catching the emotion in the fur and feathers.

He got exposition all over my nice clean carpet