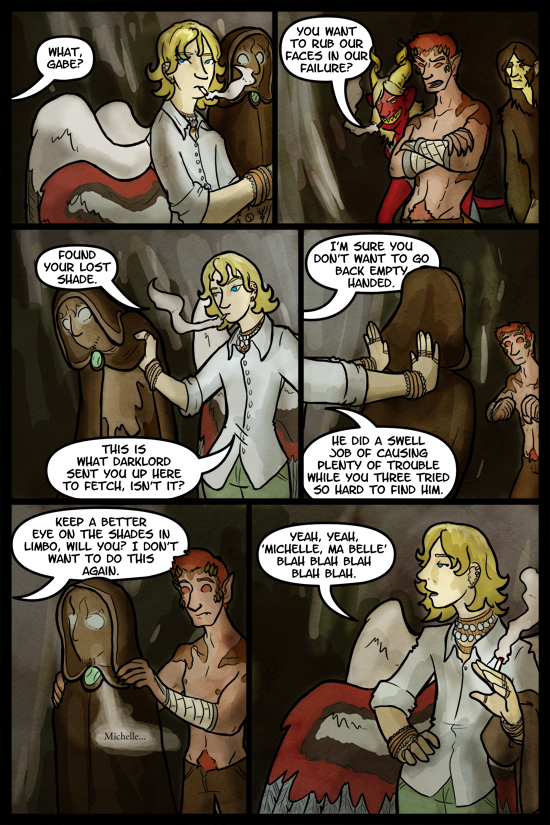 But…if he’s Gabe..aka Gabriel, isn’t he supposed to be a good guy? Then again it depends (on having watched The Prophecy with Christopher Walken;)

This Angel dude has the waist of a Disney princess.

I’m confused Gabriel is a guy name but I realized the angel looks more like a girl. Soo.. My previous comment is irrelevant, Oops. I should pay attention. okay it’s 1:00am I’m going to sleep.

Friendly reminder to the readership looking through the comments that A. this Gabriel is not necessarily “that” Gabriel. B. Gabe is an angel and therefore has no physical gender, and is thus, necessarily androgynous and really, really pronoun-challenging.

Not challenging at all. This is what singular “they” is for.

That is not a thing that exists, though. A singular “they” is grammatically incorrect because “they” refers to a group of things.

Singular they has been around since Shakespeare and before. Some pedantic Victorian decided they didn’t like it and tried to enforce their ideals on the entire language. Look up the history and also consider the present. We use the singular they and time we don’t know Someone’s gender.
“Just got off the phone with my friend.”
“Oh? What did they want?”

Indeed.
While singular “they” is a little grammatically awkward, I greatly prefer it to workarounds like “he or she”, partly because the latter is even more awkward to say and partly because some people, like me, don’t identify as either of those.

People have been trying for years to introduce a proper singular gender-neutral pronoun to English, but so far nothing has stuck. So, for now, singular they it is.

There IS a proper singular gender-neutral pronoun in English, people just refuse to use it to refer to anything that isn’t an animal or object.

That word is generally not used for people because “it” is dehumanizing. Referring to a person as an it is the language of bigotry and implies that whoever you’re speaking of is lesser than you. The connotation of the word in this case is far more important than the strict dictionary definition.

Ding dong you are wrong.