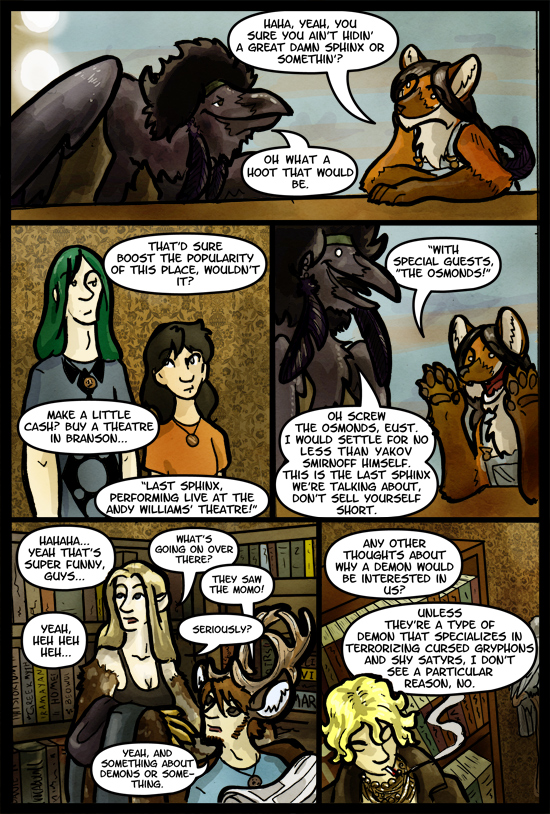 But she can rotate her wrists, Lol.

I know this reply is about five years late to the party, so to speak, but after having seen Ike… is it possible she’s a crossbreed that primarily takes after the Aellean parent, but has at least limited shapeshifting from the other?

Or perhaps she’s using some other form of magic. Harpies don’t have medallions, but as far as we’re aware, there’s nothing that says they can’t learn how to use magic, yes?

Threads like this are why first-time readers should avoid the comments on older posts. Just because some of us are on like our fifth read-through doesn’t mean everyone is.

Panels 2 and three, HAPPY fox meets HAPPY raven! these two are a hoot and three quarters, and i really want to know what the skinny, pointy kid with the massive rackon his head is1

I think he’s a faun. Like a satyr, but part deer instead of goat.

Actually, a faun is also half human, half goat. However, it has become a noticeable trend for some fantasy artists to depict fauns as having the hind legs, tail, and antlers of a deer instead those of a goat. This may be due to the English word “faun” sounding the same as the English word for baby deer (“fawn”).

…I live in Springfield MO and reading all these Ozarkian references (and possibly recognizing the building that inspired the one this takes place in) is freaky. No comic or book or movie ever takes place in the Ozarks! Unless they’re about meth or farming, lol.

I live just outside of Springfield and I agree, this is totally bizarre! I drive past the tower theater all the time. I showed that panel to my mom and she was dumbfounded, haha.

(Most of the roads inside Branson only have one lane in each direction. I can easily imagine how slow traffic is, on nights when there are major performers.)

Just REALLY getting the feeling that Eustace and Marshall know what’s what already.