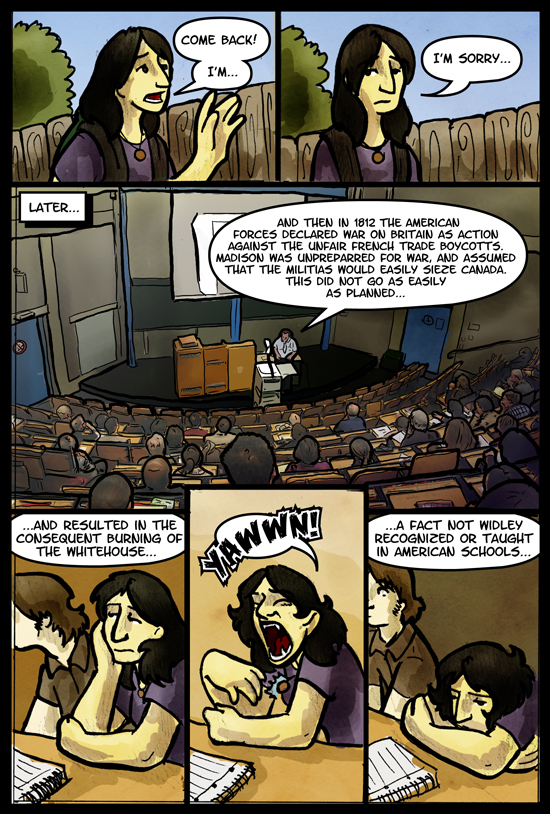 Cat’s do pretty impressive yawns. Sphinx’s are like magical cats. Therefore that must have been an impressively magical yawn. I’m actually pretty jealous.

lol, look at the kid’s face when she yawned

I notice a little glow from her medallion when she yawned. I wonder if she might discover a whole range of possibilities between human and full-form.

I kinda imagine her ‘roaring’ as opposed to ‘yawning.’
I roar when I yawn on purpose. It’s fun.

I just imagine a lion yawn…type…thing…What?

My cousin told me when I sneeze it sounds like someone stepped on a mouse.

You know, I would do relatively subtle things like that just for the sake of making those around me doubt their sanity.

That just opens up a whole host of hilarious connotations.

Is it convenient to repair the word “seize” there?

Hah! After 4+ years you’re the first to point out that there’s a typo on this page!

How about “widely” in panel 6?

Not your best page :P

We still love you though. :) Most of us were just so hungry for story we kind of bounced over the…lecture…

Yeah that’s all I did. Got two words in and went “Boring lecture. Got it.”

Actually read the lecture, just now. I think of the Arrogant Worms song “War of 1812” and then I think “foreign teacher?”

Look at the squares! It’s like viewing a level- pyramid from the top! (and no, it’s not ironic, I’m talking about the aztec- type).

Imagine dropping one of these british officers down the pyramid like an aztec human sacrifice ritual! -gruesome

Now for the REAL version of this history lesson…-
And then in 1812 the Americans declare war upon Britain, due to unfair french trade boycotts and, behind the scenes in the hidden section of there governments, forcing gryphons to pay even more tactics as the gryphons did not have to pay for a boat. Madison (an extreme anti- gryphon activist) was unprepared for war, as he did not realize the canadians had more mythological residents than expected. Thus, the militia’s attack did not go as easily as planned….

Take THAT you damn Yankees!

I’d noticed the fangs, but until I read the comments I’d thought the size of the yawn was just an art-style thing.

God Save The Queen!