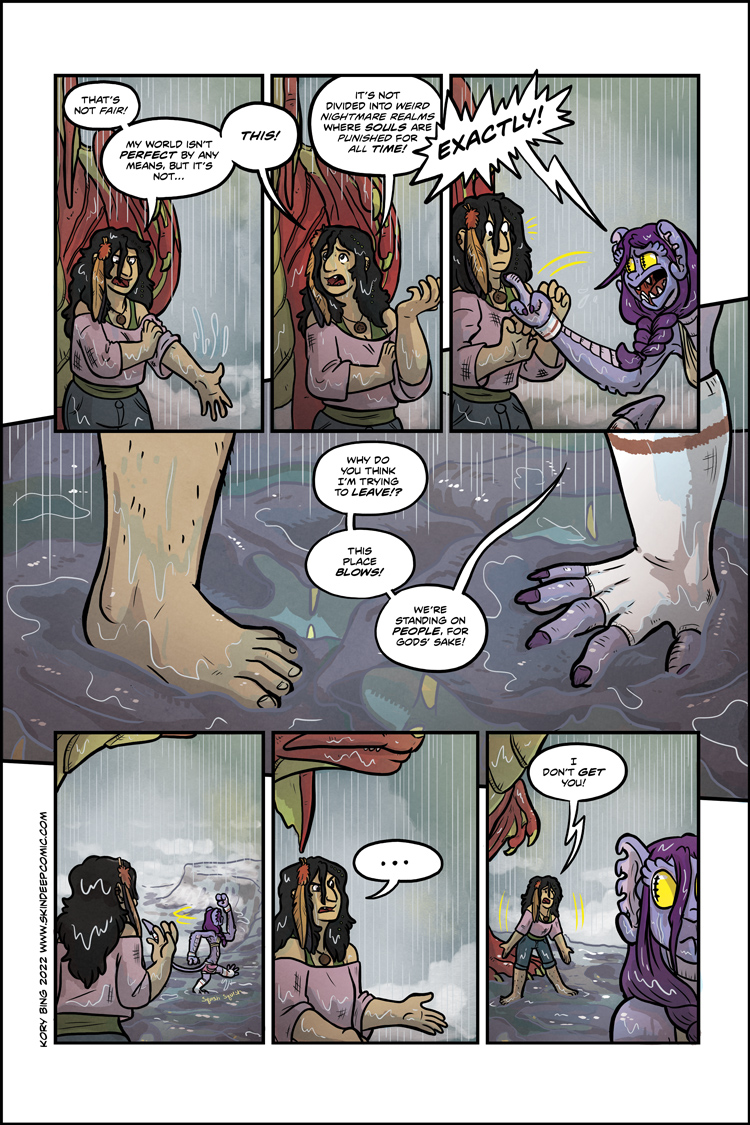 And we’re back! Thank you all for your patience while I was gone, now it’s time to get back to what really matters!

Michelle and Vera arguing in the rain while Bloodcarver stands there. Gripping narrative storytelling.

Guys, guys. Can this not wait till you’re out of the people?

No kidding. Probably shouldn’t scream and argue in front of the gargantuan cerberus or chimera thing nearby. XD

Meanwhile Bloodcarver is all ‘don’t mind me, I’ll just stand here and get peopled on’. We’re not seeing his eyes roll but I bloody bet they are.

Wait, so first shades aren’t people, but now that the misery of this realm is being pointed out they are people?

Maybe because the first doesn’t affect her, but the second does?

“I HATE LISTENING TO THE SCREAMING.”

I mean I think that strictly speaking they aren’t people, but they scream and feel pain and are a pretty profound bummer to be around. In terms of your personal experience stepping on them, they might be pretty close to people.

I’m starting not to like Vera much. She’s kind of striking me as gaslighting here versus just being jaded and flaky.

She is a demon, IIRC.

Or Vera might just lack theory of mind, at least when it comes to Michelle.

Or, since she’s a demon, she doesn’t care about anything unless it affects her.

Agree here. ‘Why does a place need to have a point to exist, it’s just like that here’ and ‘it absolutely sucks here and I don’t want to live here anymore’ are not mutually exclusive arguments. Vera wasn’t defending Dis as a great place to be, she just said it is how it is, and then when Michelle said ‘well my realm is a better place to be’ Vera’s like ‘I know, that’s why I’m trying to go there.’ Seems reasonable to me so far, Vera’s just maybe not the best at communicating in a non-abrasive fashion to an already-frustrated Sphinx who’s having something of a rough day.

Agreed-agreed. Honestly Michelle is pretty dense and pretty self-centered– she started the chapter telling Bloodcarver that the dragons should just be happy in Hell and not bother HER world, then only offered to make them medallions when threatened, and this whole conversation is only happening because SHE is being inconvenienced. “Why does this place exist? It’s making me wet and cold and I’m tired and I’m stepping in people goo! Ugh, this place suuuuucks”, and then can’t figure out why Vera or the dragons want to leave.

If I were Vera I’d be fed up trying to explain things to her, too.

I think it’s more of the whiplash of
“Oh, honey, shades aren’t people.” when Michelle talks about them being punished…
and not a few moments later, while standing on the shades…
“We’re standing on PEOPLE, for Gods’ sake!”

Well, are they or aren’t they people?

Exactly! This would make me think of some 50s comedy with witty banter—except I’ve known too many people like this in RL who fuck with others that way deliberately.

So… ~now~ shades are people all of sudden?

Could be that they’re nothing more than ‘echoes’.

Tense problems. They USED to be people, perhaps?

It would bring up WHY it exists again. If they’re not even people, just … echoes, so why are they being tortured, if they can’t learn anything from it? It can’t even be punishment, if they’re not feeling or aware. It’s just … kind of like beating on a NPC in a video game.

‘Tense’ being the operative word.

As for the dismal state in which Shades exist, it could be that folks are getting the causal order reversed. Most people see the shades in some kind of torment, and assume that the torment is being inflicted upon them, and further because its being inflicted it must be due to a REASON of some kind. A ‘why.’

I propose that it’s the other way around. The torment isn’t being inflicted upon the shades, it’s being generated by them, by their obsessions. Hell seems like the kind of realm that’d be highly psychically active and perhaps it’s also reactive. If Shades are an echo, they’d reverberate with the obsessions of the original person, naturally end up generating echo chambers, and those echo chambers end up having effects on Hell.

So the gluttony ring is all rainy and soppy and the Shades all sludgy because they’re making themselves, and their environment, like that by being stuck on a loop of dissatisfaction and consumption. No food may satisfy, it’s all dreary. That dreariness here translates as tasteless mud and rain.

And it isn’t likely Hell could ever be ‘fixed’ specifically because Shades are echoes of compulsions; they can only be what was reflected from their source, forever.

It’s actually not an uncommon belief to suggest Hell isn’t a torture chamber of infliction, but an asylum of containment, with the miseries of hell being of the making of the entities there and their endless repeating compulsions. It would certainly make it make more sense when suicides are said to go to hell, because the state of total despair one is likely to have been in isn’t likely to make anything very pretty in a psychically reactive realm.

Bloodcerver explains it here (I guess Michelle just forgot in all the excitement) But yes. Shades are not people.

I think Michelle just has a complete misunderstanding of how a place works. I find it likely that the shades aren’t being tortured or anything like that. They’re just… in Dis. And trying to explain *why* they are in Dis might be like trying to explain why people speak French. I could spend all day explaining the origin of languages, latin roots, how trade languages affect development, but at the end of the day, the answer for WHY people speak French is simply that they do. There is no cosmic reason that people might speak French instead of Arabic. Or Arabic instead of English. It’s simply a thing.

This is a pretty well established character trait of Michelle’s, that she believes things happen for a reason and gets quite grumpy when reality continues to prove her wrong. Finding out that she’s a sphinx, she took it quite personally. All woe is me, why did this happen, I didn’t want this to happen. As though someone was specifically oppressing her, but no one was. It was just a simple fact, she is a sphinx.

…
Well, that was a whiplash, neck you very much…

My feelings about Vera are similar to my feelings about Ravi, which is “You kinda suck as a person, but in a pretty fascinating way so you’ve got my attention. I wanna see where you’re going with this and how much hurt feelings and property damage is involved.”

The sudden change to shades being people when they weren’t two pages ago makes me wonder if her gecko eyes and reduced finger characteristics are more of a chameleon motif. All she has to do is keep being the person who says the things that keep Michelle walking in the right direction. Social chameleon demon.

I get the impression that Vera is treating Michelle’s question as the start of an argument, and treats arguments as fencing matches. I suspect that she’s saying whatever makes her “win” in the moment, with no regard to truth or even consistency.

She’s an ass, but I don’t think that she’s trying to convince Michelle to keep going forward here. Or, if she is, she’s not very good at it. Vera would be better served by losing the “argument” in a way that makes Michelle feel smart, thereby gaining some of Michelle’s trust.

Maybe it’s just because I’m autistic, but I don’t see why everyone is saying Vera is bad here?

“what’s the point of all this horribleness?”

and Vera responded by pointing out that Michelle’s world doesn’t have a “point” and it clearly has sucky parts because the dragons had to flee, therefore, a place doesn’t need to have a reason to suck, it can just suck.

Then Michelle says “that’s not fair” (which does not make sense to me at all, saying that Michelle’s world also has suffering is a perfectly fair point to show that this shithole doesn’t need a “reason” to exist, it just does.)

Michelle seems like she’s the one being unreasonable, asking someone to explain “why” their plane of existence exists and then being upset when they can’t provide you with an answer that aligns with what you want to be true.