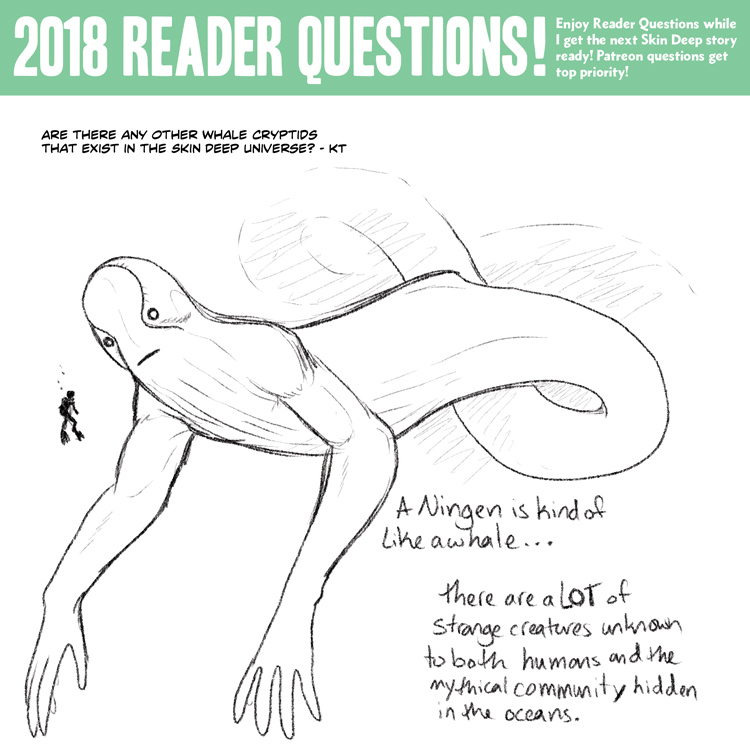 The ocean is a whole separate world, and that’s true for Skin Deep as well. Stuff goes on down there that we have no idea about.

Japanese things are scary.
I love your art, but there’s the one question that keeps bugging me: Where is the difference between heraldic critters and normal critters? Like, why are Chechen Wolves or Bohemian Lions sapient and capable of turning human with an amulet, while normal wolves or lions are not? Why are gryphons sapient, but Byzantian Eagles not? Why is a pegasus considered sapient (it can’t even talk in full form), and a normal horse not? These are questions that keep me awake at night.

The oceans are very big, and very deep, and it is very easy for things to remain hidden down there, especially if they want to…

Kraken’s mum: KRAKEN!! Have you been up to the surface again?!

Kraken’s mum: How many times have I told you not to do that?? We don’t go up to the surface! Ever!!

Kraken’s mum: Jörmungandr is a liar and a delinquent and should stick to chewing his own tail! Stay away from him!

Kraken’s dad: He gets it from his father… you should stay away from him as well.

Kraken: Well, Jörmungandr says he’s been locked up in a cave, with a snake dripping venom in his eyes-

Kraken’s mum: Good!! Finally someone over there’s showing some sense!

Kraken’s dad: Yes indeed. Listen, son, you might hear tall tales about surface hijinks, but it never ends well in real life. I mean, everyone claims to have tried out the old “pretend to be an island” gag, but what really happens is that one of the land-dwellers starts a fire, or tries planting one of their flags… did Jörmungandr show you his burn marks? Didn’t think so.

Kraken’s mum: Stick to eating shipwrecks, dear. Once they sink into the abyssal zone, they’re fair game. And if you want to talk to someone, go and talk to Dagon. He’s a nice, sensible fellow.

Kraken’s dad: I don’t know, dear… he keeps talking about raising that island of his and getting his cult going again… nothing good can come of it…

Kraken’s mum: It’s just talk, dear. Everyone dreams of bringing back the glory days. Just like that foreign fellow, Cthulu, always talking in his sleep about what he’s going to do with his sunken island “when the stars are right”…

Dude, that was an adventure.

Oh, bravo! I was grinning all the way through, and it just got better and better.

[Internalized screaming]
Along with good girl ghosts like Martha Finn, are there also malevolent ghosts/spirits in the universe? Banshee, incubus, etc.?

honestly, what I fear whenever I can’t touch and see bottom. As a poor swimmer unless I am under the surface, if I can’t see, I’m stuck on the top of the waves imagining this stuff

Does the show Gargoyles exist in Skin Deep? And if it does are any of the characters fans of it? Are gargoyles a thing that exist in the world of Skin Deep?

Gargoyles the show exists. If memory serves, Michelle once asked Jim if the Avalons were like something from Gargoyles to which he quipped, correctly I might add, that Gargoyles is awesome.

To Tim, or anyone else with the knowhow to answer this question: how common is it that the children of humans and folks with medallions end up taking after the human parent (like what supposedly happened to Sam)? Previous explanations have implied that children of a nonhuman and a human will always be nonhuman, so I’m curious to hear if anyone knows the answers.