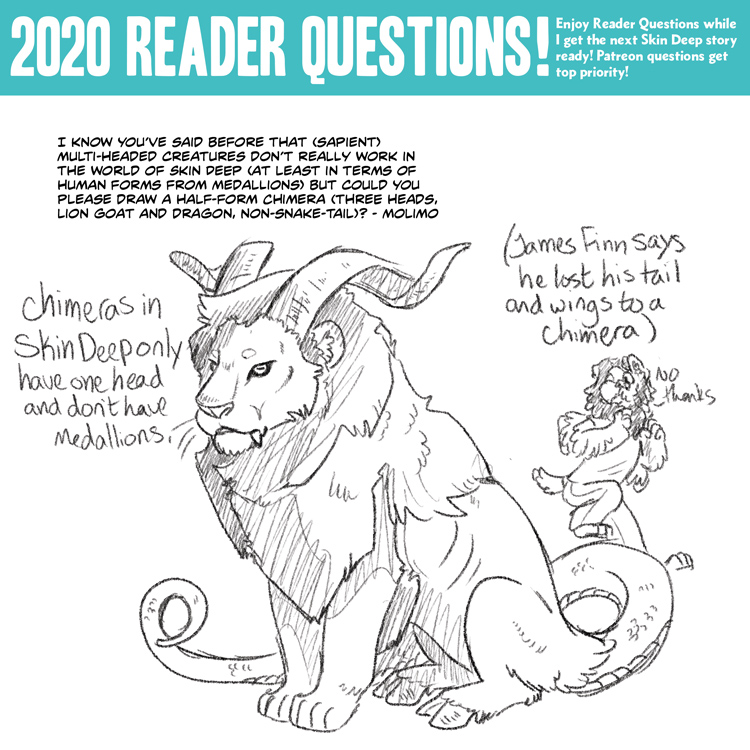 While Chimeras have never actually shown up in Skin Deep proper before, I have mentioned them a couple times and I think there are a few drawn in my sketchbooks! Chimeras are a female-only race (like harpies) that are considered monsters because of their lack of medallions. They’re kind of rough customers, and James Finn will gladly tell anybody about the time he got in a bad scrape with one and lost his wings and tail.

THAT’S how James got maimed!? When they hell was that ever said? And if it hasn’t been said, what are the details?

My impression, then, based on what James said in Illumination (Chapter 2, page 8) is that the chimera was trying to take the egg. (It’s the way he said “life-long injuries” that gives me that impression.)

I had a question related to James’ maiming – did he lose both wings, or was one damaged beyond saving, and the other amputated because having one wing is a nightmare for balance?

Does the world of Skin Deep have cockatrices? If so, do they have petrifying glares like gorgons or paralyzing spit? I’m curious if they’re also stigmatized like Manticores.

They do; I remember them in an older question about mythical pets. So they’re not sentient, but as he was show wearing a blinding cap, they have the petrifying gaze.

Scared far away James looks like a Disney character or something :-)

I was wondering if the chupacabra exists in the comic. I’m gunna guess if they do, satyrs don’t like them.

Um… if they’re a female-only race, why is the one illustrated here a male lion (with a mane) and not a lioness? Or is it just for the Reader Q?

In the myth, the Chimera that Bellerophon killed was referred to as a female even though depictions gave her a lion’s mane, so I decided to keep the mane on my chimeras. Plus, some lionesses in the wild do have manes!

Question: since pterippi can’t talk in fullform, how did they manage to communicate the desire for medallions to the sphinxes?

The big ol’ cat man who looked like he swallowed a marshmallow! I remember art of them! By the way, any possible art of the hidden races/ mythical/ whatever interacting with vikings or the Dutch traders back in the day? I’d love to see how that went over.

Also when are we going to hear this story about how James lost his wings?

For drawings of a three-headed chimera I recommend YAFGC.
https://www.yafgc.net/character/chimera/