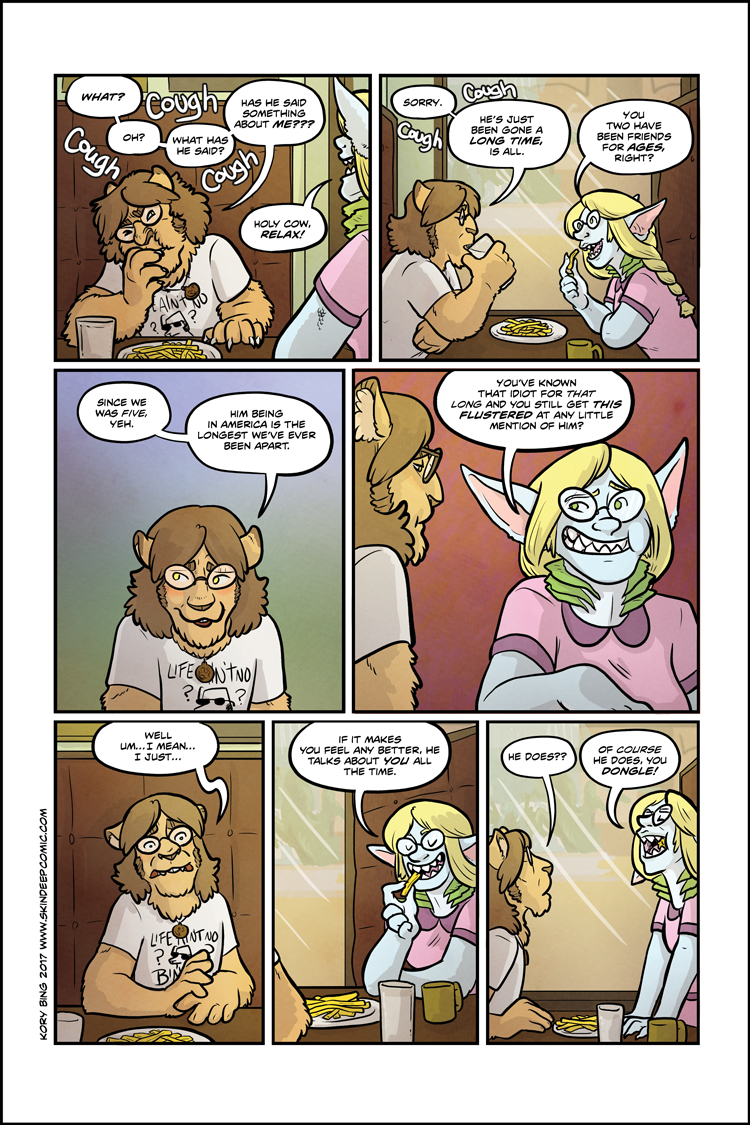 Lorne has The Anxiety.

Poor Lorne, getting picked on.

she is cruel and hilarous

I’m amazed you managed to use the word “Dongle” without it being dirty.

Hey, I had to use dongles with software in the old days. It IS a dirty word.

Please don’t tell me Lorne likes him romantically. Because I suspect Him doesn’t see him as anything but a brother, and I also suspect his high and mighty traditionalist family wouldn’t approve of such a relationship either. :(

They did date a while back. They aren’t now but they used to

They were in a romantic relationship already. Before Jim went to the states, he and Lorne were joking about Jim’s ex and he responded “But I also dated *you*, so…”

When was it said that Lorne has a traditionalist family?
I don’t think we’ve gotten any info about his family other than Jon…

They dated way back in one of the other arcs. Lorne/Jim was canon.

ye sure ye ain’t mistaking Iki and his buggane family? o3o
It was mentioned before that Lorne and Jon were Unturned until Jon met Paul Finn in in a Human High School

Foxhack, you need to go back and re-read the rest of the comic. Especially the part where Jim is complaining about the punk-rock Pegasus he used to date. Sadly, I don’t remember exactly which chapter it is, but the dialogue goes something like this:

Lorne – “How should I know? Didn’t you used to date her?”
Jim – “Yeah, but I also dated YOU. Obviously I have low standards.”

It’s confirmed by Word of God that Lorne and Jim are both bisexual, or maybe “pansexual” is a better word. They both are more attracted to personality rather than race or gender, and they did date each other for a while.

What’s a what merial said.

a small device able to be connected to and used with a computer, especially to allow access to wireless broadband or use of protected software. -Google Definition.

Thanks. Of course you could have said that it is something for the computer.

That would’ve completely glossed over the aspect of there necessarily being a mechanical form fit involved, wouldn’t it.

In the old days, the “dongle” was just a form of copy protection. The earliest dongle came with a word processor named Wordcraft. The dongle connected to one of the two tape cassette ports on the Commodore PET. The prototype was on Veroboard which dangled from the tape port edge connector on wires – so “dangle” became “dongle”. In layman’s terms, Wordcraft checked the cassette port for a specific reply from the dongle. If the dongle didn’t respond, Wordcraft would refuse to run.

Later dongles plugged into a Centronics parallel port, a 25-pin serial port, or a 9-pin serial port, and eventually USB ports. Many modern motherboards don’t have parallel ports or serial ports anymore, because most devices use some variant of USB, eSATA, or Firewire nowadays. However, they operate pretty much the same way.

The definition of “dongle” now includes things that expand the computer’s abilities. For example, if I have a laptop that does not have built-in Bluetooth, and I plug in a USB Bluetooth device, I am adding a “Bluetooth dongle”. But originally it was just a form of copy protection.

So like I said. It would be easier just to call a computer thingy.

P.S. Mark how do you get this info?

I was a computer geek before being a computer geek was cool. I’m 47 years old… I grew up with most of this “obsolete” technology. I taught myself to program in machine language on a VIC-20 when I was just 10 years old.

Also, all this information is available on Wikipedia by searching for “copy protection dongle”.

Same age as my baby brother. We ran an Apple service company out of our parents basement as well as latter on a BBS/Blackboard. Never touched a commodore anything until the time of the Toasters. Fun times.

She must be having a time eating those fries for how weird she’s eating them.

Teeth like hers are not designed for chewing. They’re designed for shearing off pieces like a shark. When she is in human form, she could chew “normally”. But in mid-form or full-form, she’d have to use some other method of “chewing” unless she wanted to swallow her food whole or in large pieces the way sharks do.

Just so you guys know I can sorta see molars back there in her mouth. At least I think those are molars.

Based on panel 4 on the previous page, I don’t think so. I think all her teeth are pointy shark teeth. But I could be wrong.

Do I see an impending happy little triad?

(This ship should not pass in the night.)

I hope Merial doesn’t choke on her food lol.

Don’t talk with food in your mouth, Merial. Especially with THOSE teeth.

I get the feeling she enjoys making men blush.
So, she’s loving Lorne right now.

Could somebot remind which time period this is taking place in.

Merial’s expressions are absolutely the best.