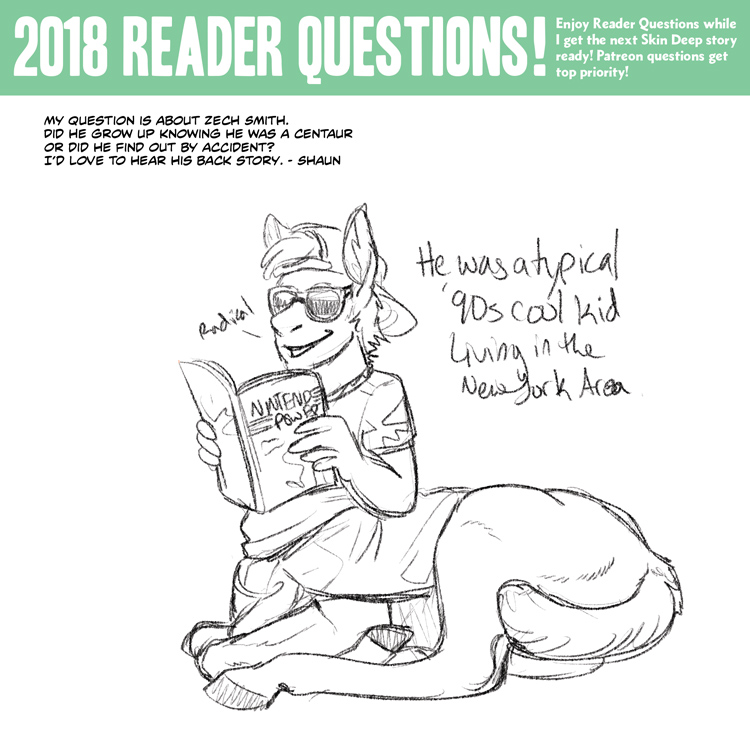 Don’t show Zech any pictures from his childhood because he will be supremely embarrassed.

Guessing the kid was a Guile player. Too ‘cool’ for the likes of Ryu.

I have to ask the age-old question here: how does centaur biology work in your universe?

Where are their major organs located? Two hearts? Two sets of lungs? Anything in their upper torso, or is it more of a glorified neck? How do they get enough air through such a relatively small mouth/nose?

Centaurs are already wildly impractical from an anatomical standpoint. One concept that I’ve seen, involves the two halves specializing: The upper body hosts the respiratory and primary circulatory system, while the lower body houses the digestive and excretory system and a secondary heart.

With the intestines moved to the lower torso, this leaves more room in the upper torso for a single set of oversized lungs and a hypertrophied primary heart (the reason for the primary heart being in the upper torso would be to make it easier to pump blood to the brain). There would also be a secondary heart in the lower torso, with a nerve ganglion where the two halves meet to coordinate the pumping of the two hearts. The stomach would be close to the front of the lower body (to keep it in a more direct line with the mouth), with the kidneys, colon, and intestines behind it.

Oh, and in regards to getting enough air… well, first of all, based on Kory’s sketch, the mouth and nose are larger than humans, and the neck is thicker. I’d lay odds on a larger airway. Also, in addition to the large lungs in the upper torso, there are several ways to make the body more efficient:

* Higher concentration of myoglobin, such as in whales and seals. This would allow oxygen to be stored in the muscle tissue and released when needed.

Thank you for such thorough answers!

Generally the response I get when I ask is “It’s Magic!” and that’s not very satisfying.

Nice details, and really well thought-out; let’s hear from the author, though, hmm? Since it’s her universe?

I really doubt that Kory has given that much thought to how the anatomy of a centaur works. To be honest, I didn’t either, until Gwenhyvar posted her question.

Most of the mythical community in Skin Deep, in their true form, are close enough to human (e.g. satyrs, medusa, nixie) or animals (e.g. gryphons, manticores, nemean lions, pterippi) that we can say “well, obviously, their anatomy is similar to a lion” or “a horse” or whatever. Centaurs are one of the exceptions, since they’re the melding of the upper half of a biped with the lower half of a quadruped.

New York? Zech always seemed to be a Nebraskan type to me.

Well, they do call him the Yank and “that Yankee Centaur”

Heh; those ears and that baseball cap… so cute. I have no trouble picturing him as an NYC-suburbs kid and a gamer geek; I wonder what the Big Apple Avalon would be like for him as a kid? I’d bet money on it having an arcade during his teenaged years.

a lot of giant ape footprints, too

Thank you for choosing my question to answer!
Keep up the great work!!!

As a child born January 12, 1999, I can state that none of this stuff makes any more sense than the 1980’s did. Perhaps that’s why I write my journal with the knowledge that the language I use will one day bore just as much as shakespearian English.

Are there plant totems?

Or what about insect totems?

I Know You’re probably sick of everyone asking for animal totems, BUT barn swallows are really nice symbolically and stuff

Hahaha! The boy likes vintage terms. Radical wasn’t used much in the 90s. That’s more of a mid or late-80s moniker. It’s was more often “killer” in my crowd.