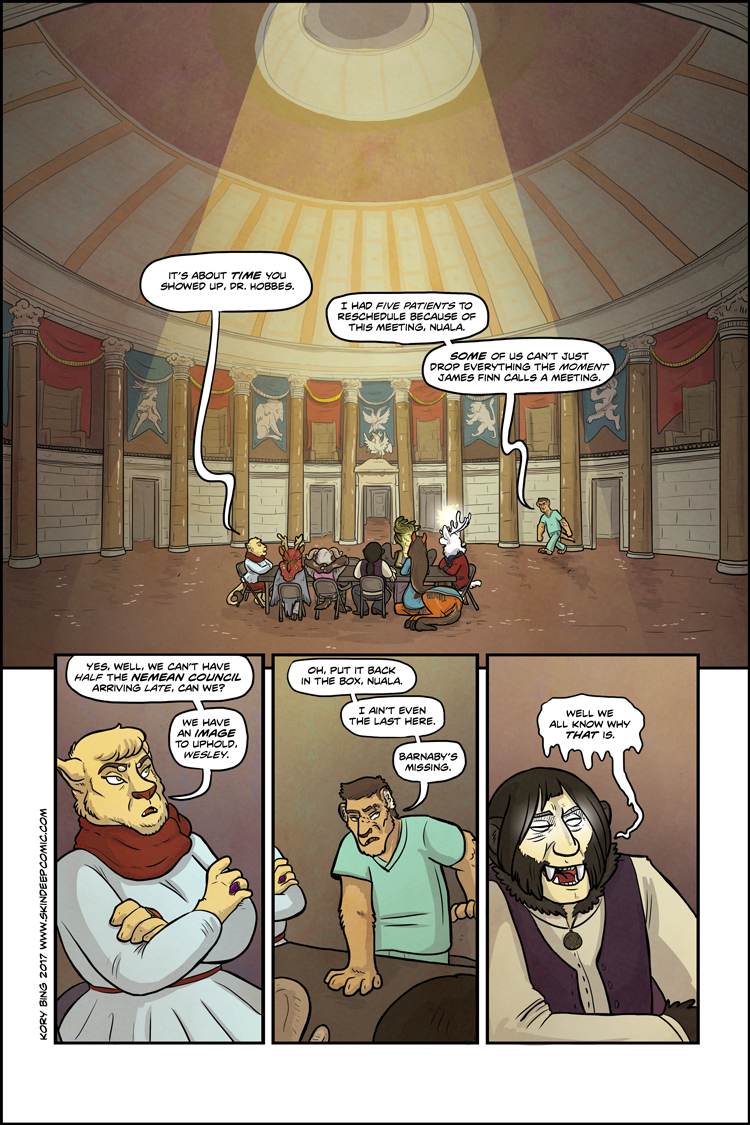 Dang look at all these new faces! I always love it when I can draw some new faces into the comic.

The Dimetrodon Glow-in-the-Dark Enamel Pin funded in a day! If you’d still like to pre-order one, it’s guaranteed to be made! And this will probably be the cheapest I’ll be selling them, too! 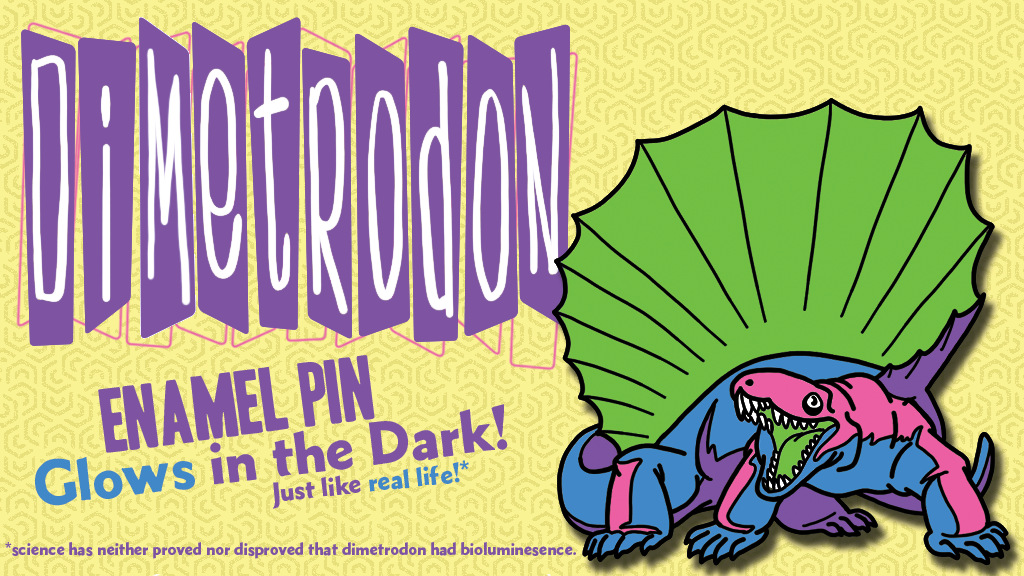 Oh I’m sure these guys are gonna be a big help.

Curious… There are two chairs left unseated – for Dr. Hobbes and for either James or the mysterious Barnaby, so either the latter doesn’t use one like the centaur councillor or James is just gonna have to stand a bit away from the table awkwardly.

I really dig that a) the mighty council is all seated in metal folding chairs and b) they’re doing it in the middle of this empty as heck room. The acoustics must *stink*.

I honestly hope that James won’t sit down; this way, we get to see him fidget awkwardly and play with his hands.

Maybe way back when the council was created it was more important and had more members, that’s why the place is so big and looks so majestic while they’re there sitting on plastic looking chairs :/

Long ago, in Washington D.C., there was an elderly senator who leaned to the side when seated in his chair in the senate chamber. Everybody wondered how someone so feeble as to be unable to sit up straight could be a firebrand during a debate. Later, somebody discovered that the majestic dome the building’s architect had designed reflected and focused the whispers of his party’s rivals to a point very close to the supposedly “feeble” senator’s chair. This enabled him to eavesdrop on his opponents’ confidential conversations. The senate chamber has been relocated since then.

This probably has nothing to do with the folding chairs. I just mentioned it because it seemed interesting at the time. I think it is more likely that the thrones are used for important ceremonial occasions, such as trials. Folding chairs would be more practical for day-to-day business.

Either that or budget cuts.

By the looks of it, there’s thrones up in the alcoves that the council once sat, but probably because reasonableness, the council settled for simple folding chairs, and a small table in the middle

There is actually three chairs left because we’ll there are four on one side so there should be four on the other.

Vadoma’s right wing (left in the frame) looks like it blocks the position of a chair that would be across the table from Alec’s dad.

Useful in case someone with super strength (e.g. Nemean Lions) decides to throw a fit. Why let someone break the valuable antique chairs when they can break cheap and easily replaced folding chairs? :)

Also, as Greenwood Goat noted below, the alcoves between banners contain thrones… but there’s no sign of an audio system, so they would’ve had to basically shout across the room at each other if they sat there. Having everyone sitting around the same table is probably far more convenient.

Maybe they also use the hall for parties

I wonder if that white stag is Blanche’s father?

I was expecting a ‘No, Luke. I *AM* your father…’
I got something much better instead.

This is still a pretty small community, though, so it’s a fair question.

Or Blanche himself? This is happening some 20-30 years after Exchanges, after all. Also, where is Anthony, for that matter?

Actually, Exchanges happened in the same year as Jim’s going away party to America.

Woah I’m actually really curious on what I did to make you think this is taking place 20-30 years after Exchanges! It’s barely been a year!

Kory, in your text for the previous page you even said this is back to the present day of the story, 2005, after the flashback whilst Michelle was unconscious.
So it seems as if Silyon is only looking at the art and not reading everything.

Mainly me not having sat back and re-read through everything that’s happened for a while, and therefore missing some of the details. Another one I almost put up was the question of why, if the Liverpool Avalon is open-air with no ceiling, it hasn’t been discovered by satellites or plane fly-overs already. That stemmed from me totally forgetting the page where you clearly showed the bird falling through the illusionary roof. In short, it’s just about time I go back and binge-read the comic again. Especially now that finals are over.

The art is amazing, though, even if details of the story are slipping my mind lately. It’s improved so much from back when you started, so much cleaner and with such a better sense of anatomy. You’ve come a long way, Kory, and should be proud.

Not just binge reading the comics themselves but also all the comments.
:)

*Eyes the glow between the white stag’s horns*

Is…That a St. Eustace’s stag, then?

…I love the character designs here, though! :D

I’ve wondered about that myself.

i love how they have this big fancy hall to meet in.. but they are meeting at a folding table and sitting on folding chairs. it is an interesting dichotomy that says a lot about the society in that particular Avalon.

Yeees… I was imagining something more like a masonic hall, with similar furniture. Looking up, those alcoves in the wall between the banners do appear to contain thrones. Perhaps the elders originally sat up there and p-r-r-r-ojected their voices at each other, but the modern lot decided on the current seating arrangements as being more practical.

So, from left to right: Nemean lioness, cervine faun?, senior satyr, bugbear – possibly Alec’s dad, Mme. U, centaur(ess?), white stag – possibly Blanche’s dad, and Dr Hobbes the cub-clawed Nemean GP. On the previous page he was lounging with his back against the main door… was he finishing off a smoke before he went in?

Mr. Hyde: Before we start, I move that we lift the smoking ban in here.

Mme. U: Not this nonsense again! All against-!

All except Hyde and Hobbes: *raise hands*

Anyway, if that is Mr. Noir there, he would have had an inside track for getting Tony Gillis admitted to the LA, just as James Finn would have had an inside track for Paul’s friend Jon. “I’ve looked him over and I’m sure he’s one of us. Blanche can bring him into the Avalon, and Madame U can give him the test and fix him up with the right medallion. And yes, Winnie, I’ll pay for it. Now, all favour…”

At the table on the foreground side, yes, it is a Faun.
On Patreon we got to see preliminary design art of that character, and the Satyr as well.

As for the centauress, it would seem no-one has even glanced at the Patreon Bestiary PDF which Kory made available for purchase late last year. She features on the page describing Centaurs.

I have to say I didn’t expect Madam U to be on the council. Then again, as the only purveyor of medallions in the LA it makes sense the more I think about it.

They needed a representative for the Monster species on the council, and as the purveyor of Medallions, and one of the oldest people in the LA, it makes sense that she would be on the LA Elders.

…I am hoping this doesn’t turn into the usual trope of “the elder council/guys in charge being completely useless and overly stern, while the plucky teenagers upset the world.” Just grumping, here. I run a lot of RPGs and do you know how many players are intent on giving the queen/king/etc. the finger, and assuming every official is an incompetent nincompoop? XD

That, and doors. DOOOOOORS, maaaaaan.

You did note the description that James had for the LA Elders, of which he is a member?
Not very flattering and seems to play straight with that trope you describe.

“Efficient government” is more commonly known as a dictatorship. Most any normal, not-completely-terrible, functioning Republic is going to look like a half-a**ed mess from outside and likely even moreso from inside. Sometimes tropes are tropes for a reason, even if it’s exaggerated for effect.

By the way, I love the bugbear’s face.

Is that an earthen floor in that building?

I’m intrigued by the banners, I can’t quite figure out what the leftmost and center ones are. I’m assuming they signify the species who founded the LA and are granted a spot on the council but there are probably more around the room and there aren’t that many species in the room. Or chairs. I’m kinda figuring our field of view there is about a third of the room (based on the curve of the walls) which would mean 15 banners, 15 species, but there’s only 8 species represented (counting James Finn, not counting this Barnaby person who probably brings that up to 9 species) and the Nemeans have 2 seats.

Also, the council member to Nuala’s right has wings and antlers, I think.

What’s on the centre banner is a pair of liver birds, part of the heraldic symbols of Liverpool.There’s also the pair of them as statues on the top of the door frame, in front of the banner.
Leftmost is likely a faun.
As for the seated members of the LA Elders, what Kory described about the faun on Patreon, is this member of the LA Elders wears a cloak that looks like wings.

Ahhhh, ok. I could tell there were separate birds on the door frame, I just couldn’t figure out what KIND of birds they were.

I was very confused because wings+antlers= ???? and it just didn’t make sense to me. Thanks for the info.

If Kory hadn’t given us on Patreon the info about the Faun stag, then folks including us would likely have been guessing Peryton stag for the one on the foreground left corner of the table.

So, was I the only one who read “Nuala” as “Nala” at first glance?

I would not be surprised if Nala had become a popular name for girls, among Nemean and Bohemian Lions, after how popular TLK became.

Nemean Council? … Seems an odd name for a multi-spcies body in a community that originally didn’t want Nemean Lions at all and considered them monsters undeserving of medalions or consideration as people.

The Nemean council refers to the 2 Nemean lion representatives, not all of the elders.

It was referred to all the way back in Handshakes when Paul tells Jon to keep his temper in check or the council will confiscate his medallion again… and later in Kill Them With Kindness she Ike’s Mum is going to the Nemean council hall to hire some movers… Though the way Nuala phrased it it was briefly unclear how separate from the Avalon Council they were.

Oh I can just tell that they will be REAL helpful.

From what little we know about Dr Hobbes, he and James are likely the most sensible ones on the LA Elders.
Nuala is upper class, with haughty snob Attitude.
Alec’s dad seems typical mocking bugbear. Shows us a lot where Alec gets his behaviours from.

The other three, though, not enough to even guess at. Even what we saw on Patreon gave us little to guess at, regarding their personalities.
https://www.patreon.com/posts/new-character-7888282

“Well we all know why that is.”

Did you eat him?

It might pay to re-read RQ 33 from earlier this year.
http://www.skindeepcomic.com/reader-questions/february-reader-question-33/
I wonder if that character is our missing Barnaby?
If so, then very much in character.

Or had a stuffed toy he called Calvin.