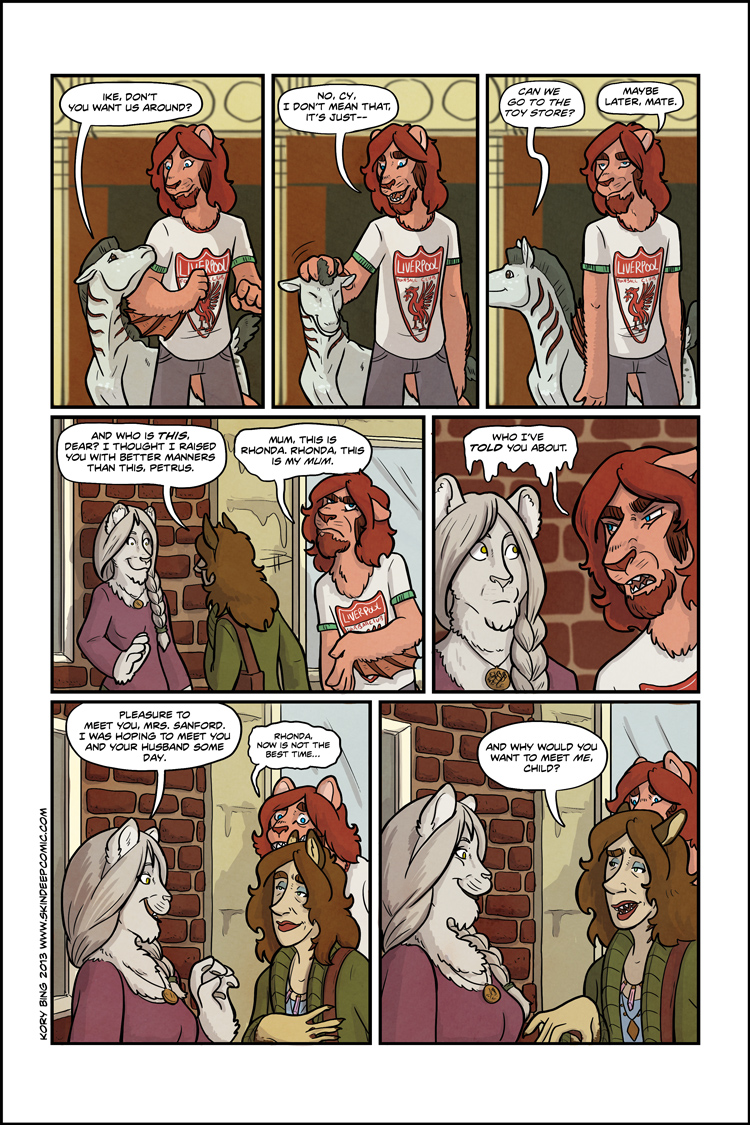 Gosh, a lot of people really hate Lynn already, but remember that every cloud has a silver lining.

Cy is the cutiest little critter I’ve seen I hope we see his adult form soon.

If you check out the part of the store where you can buy the PDFs, the August 2009-February 2011 Sketchbook includes a sketch of Cy as a teenager in mid-form. There are lots of other sneakpeeks to be found in there that I think are worth a few dollars going to support the comic.

OOooh no it’s going to be terrible. Isn’t it. Don’t let it be terrible! Rhonda!

Is this unterrible enough for you?

Lynn: This is brilliant! Wonderful! I’m so happy! I’m going to get a daughter-in-law to torment! Yes! Let’s go shoe-shopping together! I’ll tell you everything you’re doing wrong! Come on Petrus, Horace – you can carry our bags!

Rhonda: Capital idea, Mrs. Sanford! Every girl should have a mother-in-law like you! And might we drag them to the tea rooms afterward? You can make sure that I’m holding the cup correctly!

But some clouds have a silver lining of chromium and strontium 90….

And every silver lining has a cloud?

True enough about the silver lining. There’s got to be SOME reason for Horace to want to stay with such a… peach.

Oh, I can’t wait to see how this plays out.

Oh gosh, the tension. Rhonda has nerves of steel.

Why are here hands yellow? That’s the part that bugs me. Are they furred like her ears? They don’t look furry.

Look at Cy’s ‘hands’ earlier on.. they are more webbed than anything..

Since only Ike is part Manticore, that is why he’s the odd one out.

My hammer….
It thirsts for justice.

Rhonda is from old Bohemia, so its likely her manners are impeccable.
She may need them this day.

My manners are fraying just a little.

Actually, assuming Kory hasn’t changed her mind since Sheana Molloy created the character, Rhonda is from Blackpool in Northern England, as mentioned here ( http://sheana.deviantart.com/art/Skin-Deep-Rhonda-62166346 ). I tend to view these sorts of posts as what the Gargoyles fandom calls “canon-in-training,” meaning it is assumed true until something official, like a comic page, reader question, or character profile on the official site or a print edition, contradicts it. Since Rhonda only showed up in a couple of pages of Exchanges, her character profile from that arc was equally brief so the profile Sheana made is the best information we have so far.

Still, she’s a British girl from a good family. I think she can make a fair showing here.

CRIPES ALMIGHTY LOOK AT LITTLE CY’S FACE IN PANNEL ONE

Indeed, Caprine.
The really sad aspect of that first panel is that Cy is unintentionally turning himself into ammunition for Lynn to use against Ike.
The sooner Lynn’s building bad karma catches up with her, the better.

“And why would you want to meet *me*, child?”
Implication: who the fuck do you think you are, getting all chummy with me?

This is getting real ugly real fast.

I think she’s just surprised that somebody wants to meet her. It’s never happened before!

To me it looks like Ike gets along with his step-dad, and adores his 1/2 brothers. But loathes his mum’s attitude.

*chuckles* Cy is just adorable, isn’t he? He sort of knows when to brighten up a sitution just when it needs it XD
Thought, everyone keeps saying that Rhonda that has ‘nerves of steel’ for telling Lynn that and everything, we still don’t know her exact thoughts on Ike’s mother. So, we’ll have to wait and see what comes up.
(Also I am very tempted to draw out cubs between Ike and Rhonda…dang fan mind!)

My mom taught me manners using the same methodology. “See how terrible this is? Do anything but this and you’ll be fine.”

Never… NEVER try and get into a ‘politeness’ contest with a cat or any feline what so ever.

Horribly. embaressingly and will set yourself as a tongue sharpening post until the next poor sap comes along.

Gosh, you ain’t kidding about all the Lynn hate, Kory! I don’t hate her… I’m just too impressed with how REALISTIC she is as a character! Clearly she had a lot of issues stemming from Ike’s mysterious father, his birth, his childhood up until his “accident.” Throw in Ike’s OWN issues, and the fact that neither of them had the chance (so it seems) to even begin working out their issues… it’s sad, certainly, but also realistic. And the best part? This relationship is very mend-able, if they both want to.

You hit the nail on the head. Looking at Ike’s backstory, it’s perfectly understandable that Lynn would have issues that she still needs to fully work through. Not every complex character is one you want to sit down and have a cup of tea with.

I agree, Tali and Mage_cat. Lynn is very realistically put out there as the “overbearing mother” type (possibly also the snobbish matron), but while I find her grating when she and Ike argue, I don’t immediately hate her. I might find her intensely annoying to be around for very long, but that’s different from “hate.”

Something that I haven’t seen much mention of is the fact that IKE plays a role in maintaining the strained relationship with his mother, too. He isn’t exactly Mr. Diplomacy. Even apart from the more dramatic backstory possibilities, it’s likely that they’re each so caught up in acting/reacting to what they THINK the other will do that they’re triggering each others’ bad behavior and missing out on the redeeming traits that are probably in there somewhere. Rhonda may be just the wild card needed to bust them out of their rut and help them try something new.

Remember the title of this chapter: Kill Them With Kindness. I’m betting Rhonda will try to use that exact tactic.

Well, Ike *is* trying the kind of solution he *can* provide, which is to stop continuing this FUBAR atogether. Lynn trying to outmaneuver that is only warranted if she has a *BETTER* option at hand – and it certainly doesn’t look like that.

As for Rhonda, I’m not yet ruling out that she’s looking forward to playing BFF with Lynn as an extension of “just to spite you, scamp” … :-/

Let’s see, what has Lynn done so far? I’ll skip all the little dismissive quirks of speech for the sake of time and avoiding nitpicking (“that little band of yours”, “your… accident”, etc).
-Moved into the LA unannounced despite her son moving there to get away from her
-Referred to a Nemean as “one of those… people” (racism/superiority complex)
-Criticized her son for something he can’t help that is clearly a sore spot for him
-Went into a rage because her son was upset with her for dropping a major life change on him unannounced
-Snapped at her husband and made him visibly uncomfortable for speaking up
-Refused to call her son by his preferred name
-Criticized Ike for not squeezing an introduction into their argument

What has Ike done?
-Tried to find out what was going on because he was left deliberately out of the loop
-Praised his little brother
-Tried to defend himself against his mother’s unwarranted criticism
-Very mild swearing
-Became upset with Lynn for dropping a major life change on him unannounced

This is a toxic relationship. I know it’s easy to try to take both sides from outside of the situation, but the parent has more control of the relationship, and all of this stems from her dismissive and controlling attitude toward her son. She was probably at least this bad when he was young and had no real way to escape or defend himself.

I’m not mad. This is just a comic, and an excellent one at that. I’m not trying to argue. I doubt the people I’m responding to will ever read this. I just needed to vent because I know from personal experience the kind of scarring a child can get from an abusive relationship like that, and I hate to see people blaming the victim.

I wonder what the mythical equivalent of toys are? I’d guess there has to be specially built toys for Nemean lions and mythical beings who are dexterously challenged

…or who may tend to chew on things or scratch them with their claws. Friends/siblings arguing over whose turn it is to play with a given toy could be pretty darn hard on the toy when the kids in question have fangs, claws, and/or inhuman strength.

I’m imagining an Avalon toy store as a cross between a normal toy shop and a high-end pet store, minus the actual pets.

And you wonder why he didn’t tell you?

Total cuteness factor on the kid in first panel, then he, well, acts like a total kid on that third panel lol. Omg, are they gonna get married?!