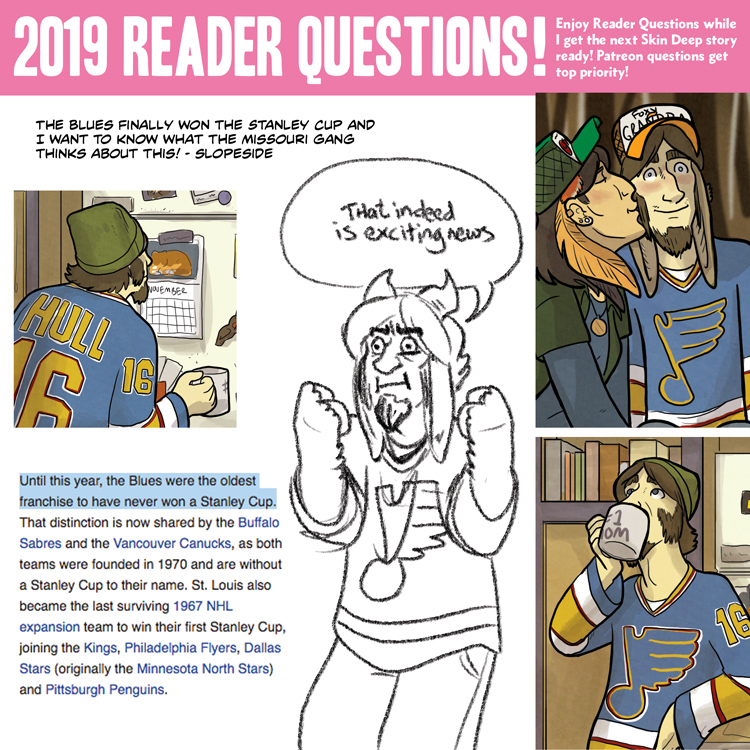 In actuality Greg would be VERY UPSET if you spoiled the Blues’ first championship win to him, but we’re pretending that the comic isn’t over 10 years behind the real world and he got to see it in real-time.

The fear of prophecies unfulfilled is just as bad as being directly told: that’s how you get doomsday cults!

X- Date would be a lot more useful if I were placing bets. Remember how Biff got rich in “Back to the Future?”

Not really a great role model when it came to USING that money, though… let’s call it even and just use prophecy to crown monarchial leaders we approve of in order to control intergalactic spice trades or who gets stabbed in the contest to rule Scotland; you know, good clean fun

I know there aren’t vampires in the Skin-Verse, but Krsnik and Kudlak seem to fall under the shapeshifter category… Right?

Since a Krsnik is a type of vampire hunter and there are no vampires in the Skin Deep universe, I’d think that the Krsnik could not be real, and as a consequence, its inverse, the Kudlak would not be real either.

We’ve seen a lot of Griffons in Skin Deep and its Reader Questions (including some silly Pygmys), but I dont think we’ve seen a Minoan Griffon yet! What would the Skin Deep take on them be like?

On the subject of St. Louis, Which of the characters have been up in the Arch?

No no no no, I don’t think you guys understand how INSANE these Stanley Cup Finals were! And as a hockey enthusiast, let me run down how the Blues, against all odds, won the cup.

First and foremost, during the first half of the season, the Blues were dead last in standings. The team was tanking, players were fighting during practice, everything was going up in flames. Coaches were fired, last minute deadline trades were made, and the Blues seemed to get their legs beneath them, finally.

Thanks to the inspiring song “Gloria” by Laura Branigan, the Blues went on a much-needed winning streak, shooting them straight to playoff contention (I am NOT kidding.) And who should meet them in the playoff finals but the Boston Bruins. The same Bruins that met them in the Stanley Cup finals nearly 40 years previously and soundly beat the Blues 4-0 in the series. This was the very same playoff finals that captured arguably the famous hockey photo of all time: https://www.nbcsports.com/boston/sites/csnne/files/styles/article_hero_image/public/2019/05/21/bobby-orr-winning-goal-1970-stanley-cup.jpg?itok=0KTBbNF8

If you know the very basics of hockey, you have seen this photo.

It was a rematch of the ages, the tough bruisers Bruins against Stanley Cup starved St. Louis Blues. the series went the distance, all seven games of the series battled out like no other. The Blues would emerge victorious, and that’s how Brett Hull became the drunkest man in the United States for a full week.

Cause wonderland. Is the story of Alice true? Was it exaggerated?

Any dwarves, elves, or kobolds in this reality? or might they be mid-form medallion users messing with the human neighbors in the woods and mines? My part of Wisconsin has the legends of knuckers, or kobolds, guiding the lost miners from the mountains as long as you left them a corner from a square pastry the wives often sent to their husbands as they worked. It didn’t hurt that it was the corner the miners held as they ate, and thus covered in dust and refuse from their work in the tunnels…

When you first started working on Skin Deep, where did you begin? Did you have an overarching story ad you filled in the gaps, or was it more like a bunch of little stories you found a way to string together?