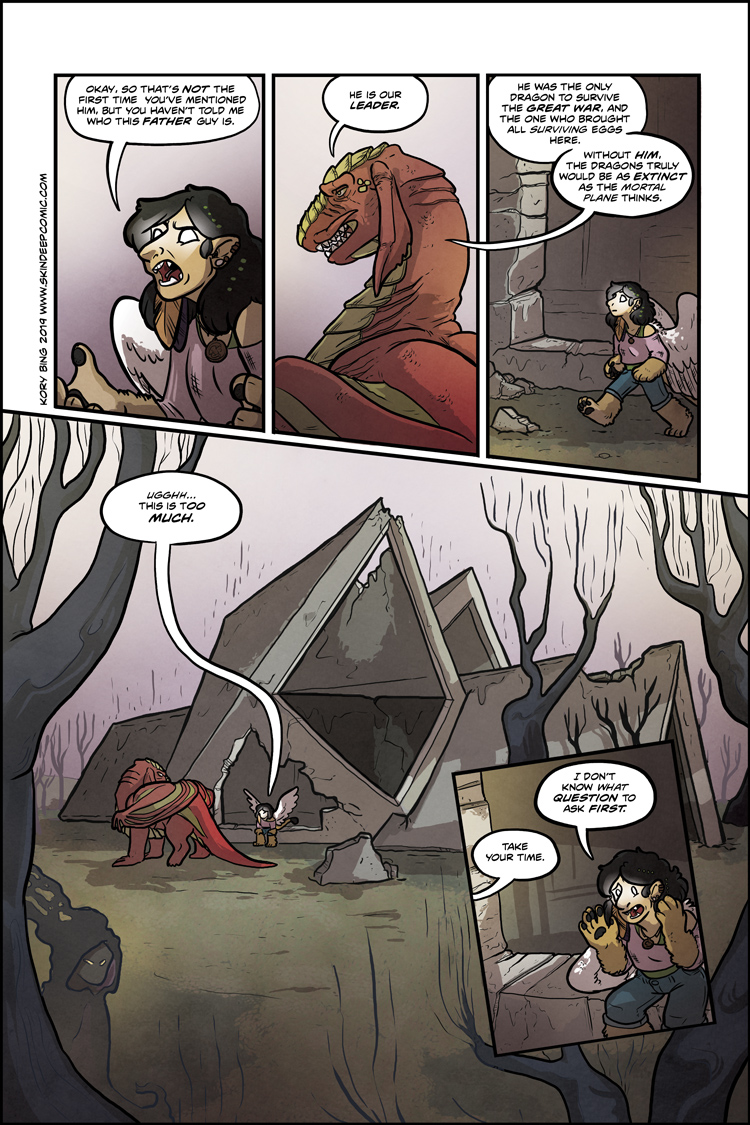 The Skin Deep Pin Club is back for new subscribers! You have from now until the end of the month to subscribe if you want to get some sweet goodies in February! More info right here! 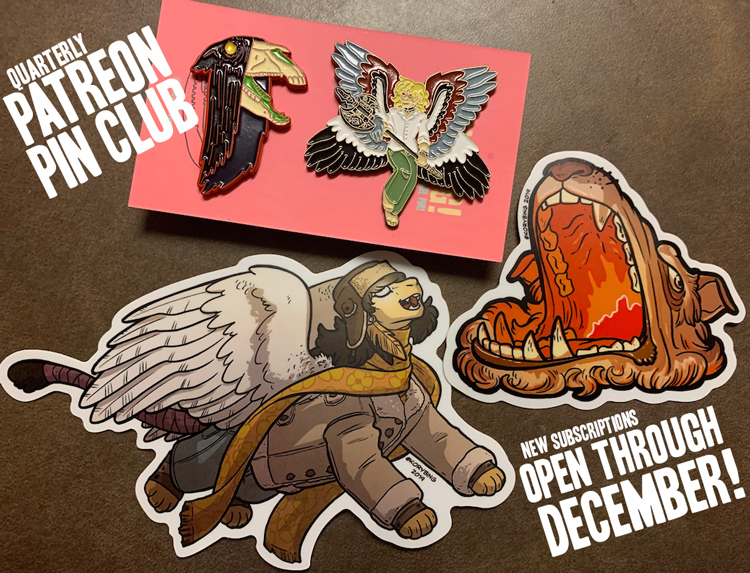 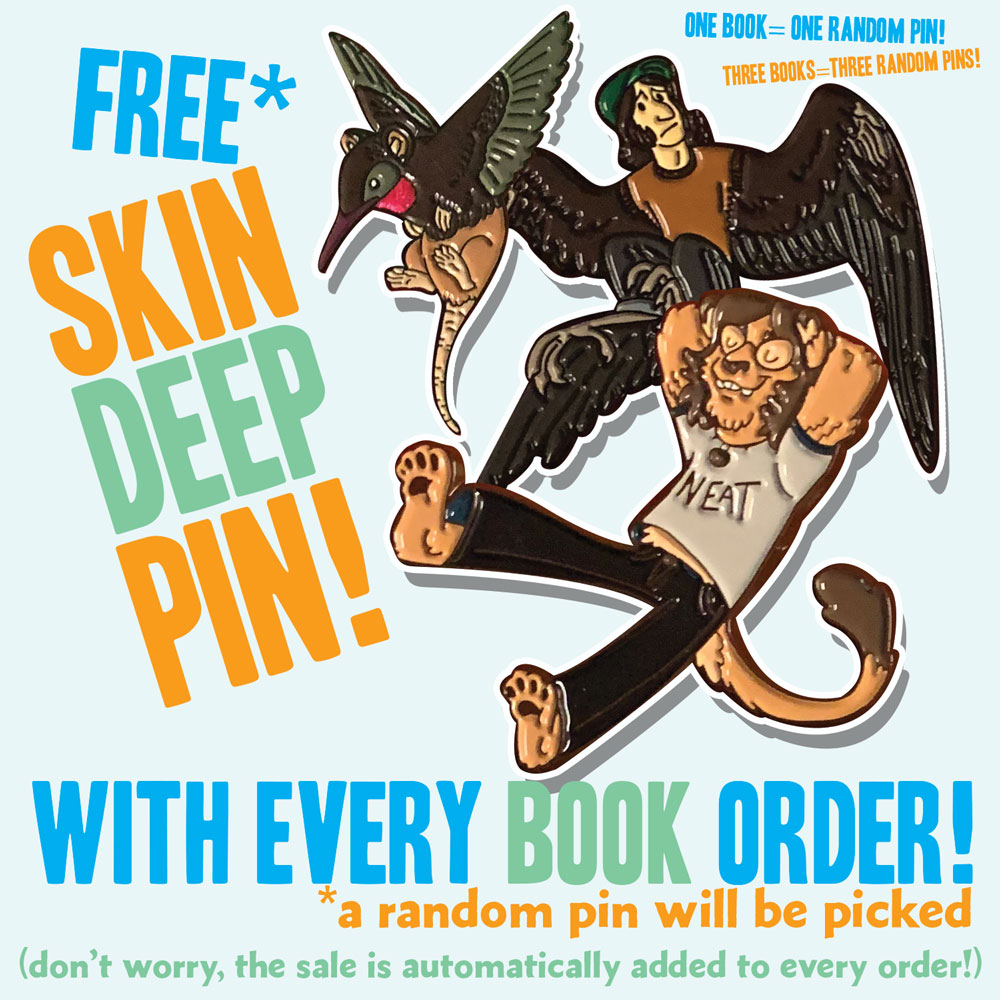 I’m glad to see Bloodcarver willing to let Michelle take a break if she needs it. He’s not in a rush

He’s being admirably patient for a dragon – if he were more experienced in diplomacy, he’d probably be anticipating and answering Michelle’s questions himself.

At the very least, he’s been more helpful and direct with Michelle than virtually anyone up to now.

I have to agree with Eala Dubh here.

Given that he’s taking ‘the last Sphinx’ (as far as anyone knows) to meet ‘the last survivor of the Dragon/Sphinx war,’ he seems to be making every reasonable effort to try to make sure this meeting does not start off on a hostile or untrustworthy footing.

In the sphere of behaviors we usually assign to dragons of legend, he’s being overwhelmingly indulgent.

Of course, some of this might also be ‘She’s gotten visibly more powerful since we last met, and for all I know she IS dangerous to me and I should be careful.’

After all, the war seems to’ve ended in a very Pyrrhic fashion. I’d be very surprised if anyone, draconic or otherwise, wants to restart that particular shin-kicking contest ‘just for old time’s sake.’

“The A-Frame of the Damned.”

That aspect of the landscape reminds me of some areas below Mt. St. Helens about 39 years ago.

From the flashbacks Michelle had earlier, it looked at the time like the sphinxes were getting slaughtered on masse out of spite rather than self-preservation. Now we learn only one hatched dragon survived, which makes me wonder if the tide turned because the shinxes got the humans involved. “Oi mates, dragons are still real and there’s loads of them over there. Better do something about it.”

I suspect something more along the lines of the 1939 “Peace on Earth”, though it’s likely humans got involved. We know that by that time they were already trophy-hunting the liminals and there’s enough legends about knights slaying dragons to safely guess that any dragons that didn’t die via Sphinx were killed by humans.

Oh my GOD Liminals is such a good term for the mythical creature population.

Thanks! I know there’s no official term for them as a group, but ‘liminal’ seemed best to me since liminal beings are entities that can’t be put into just one category.

“Liminals” is also the term coined in Monster Musume for the non-human population. That being said, it’s a very different take on the whole human-mythics worldpoint.

The Dragon-Sphinx war makes sense if for some reason the medallions do something or represent something that’s incompatible with dragon survival. It becomes imperative, for the dragons, that the medallions stop being made. And that all existing medallions be taken, presumably to be destroyed in some way that undoes whatever ‘damage’ was done when they were made.

The medallions, if I understand the history correctly, were the first ‘stable’ magical items that would last indefinitely. The magic in them would not be released, at least not automatically, back into the world. And that might have been something crucial for dragons, in some way.

So, in my head, anyway, I speculate that the magic that made medallions might also be magic that dragon eggs needed to hatch. For the sphinxes to go on making medallions wholesale would mean the dragons go extinct. Naturally that’s cause for war. Naturally the dragons are arrogant assholes who don’t admit a weakness by explaining what the problem is or try to work it out some other way. And naturally it escalates because now that the war is on they have enemies who actively want them destroyed and they don’t dare admit the weakness that was their cause for action because it could be used to destroy them.

You get the ‘mutual-annihilation’ result when the Dragons manage to slaughter all the sphinxes save the line that eventually resulted in Michelle, but the world’s magic/environment is already so damaged that dragon eggs cannot hatch here and the Dragons themselves go extinct.

Anyway, it tied things up with such a pretty bow in my head, I’m apprehensive now that we’re approaching the point where I will, almost certainly, learn that I am wrong.

Huh, I was going to lead with something very similar to your last sentence there. My own theory was that it was just because the Sphinxes and Dragons were the two powerful factions of their day, and that often ends in wars that seem rather pointless to people some generations later.

In the flashbacks it’s mentioned that all the mythical community want medallions are there’s lots of aggro about who gets one and when, I’d assumed that dragons were just grumpier than satyrs (and/or less scared, due to not being goats with less than awesome goat powers) about it.

But yeah, give it a few weeks and it’ll be revealed that I’m totally wrong.

Meesh is right, everything is very confusing.

Nice to know the Father’s backstory atleast, can’t wait to see him in person!

More likely cranky. Very very cranky.
On top of that I would add, most likely a hermit type with a good degree of wisdom and foresight.
Add all that up with saving all the eggs and raising young dragons in the land of DIS and yes he will be very cranky indeed.

I’d have to disagree. It’s more hope than anything, but I’m hoping that the Father has lived long enough, seen enough, and weary of the hatred enough, to be soft spoken and parental. I’m not saying he’d be fond of Michelle, I’m saying he’d probably have enough sense to not piss her off, with a flavoring of genuine kindness, all for the good of his kind.

We can hope that he’s weary of hatred and anger, but *somebody* gave Bloodcarver those scars, presumably right after he released Michelle.

Man, if parenthood wasn’t hard enough, imagine being the only adult responsible for rearing the entire remaining population of your species’ young o_o;

How old even are the dragons???

Well, I’m pretty sure it’s been said that the great war happened 800 years ago, so they clearly have a significant lifespan.

Well according to the D&D lore books, Adulthood is anywhere from 1 to 8 centuries and after that they can live between 1 to 2 millennia barring unforeseen circumstances like being impaled on a lance.

And enter in dad mode bloodcarver. Did nobody else see this coming?

Blood seems to be growing more and more patient. makes me wonder if the father will be just as patient. or will have a grudge. we dragons can be very spiteful and wanting to get back at those that wronged us. But after a war that nearly wiped out both sides. There is reason to want peace again.

I think he wants Meesh to have her little freak out before she meets the Father so she doesn’t have it during the meeting and potentiality ruin things.

Usually the one that survives is either a selfish bastard that started the whole mess or it is the one that didn’t get involved in the whole mess in the first place and that nobody bothered to take note of as being someone inconsequential.
I vote the second possibility.

It’s nice to see this side of Bloodcarver. Poor guy was pretty desperate before, what with being hounded for results, facing punishment from the “Father” for letting Michelle go, and general desperation for dragon kind as a species. I think now is when we are finally getting a taste for what he’s usually like. Now that Michelle is cooperating they have all the time in the world for questions. Especially if it means ensuring things are in his favor. It’ll be great to finally find out what they want! Remember that the attempted kidnapping was an act of desperation under the assumption that she wouldn’t come any other way, we still have no idea if what they want is good or bad (from Michelle’s point of view)

I am pretty sure what they’ll want is medallions since that would allow them to finally leave Dis. The main issues are whether or not Michelle *could* create them even if she wanted – and whether they’ll believe her when she says she doesn’t know how.

Oh she “knows” how since she has “ALL THE MEMORIES”.

The question here will be can she create them with no actual experience doing so?
Knowing is one thing but doing is something completely different.
It is the difference between reading an excellent do-it-yourself book and going through an apprenticeship.

Only one, male, dragon survived? That’s sad, I was hoping to see Drag When again.

She may have “all the memories” in concept, but retrieving them may be a challenge. Plus what ever supplies and such to make the medallions.
Interesting to see Bloodcarver slow down and answer some questions. Looking forward to see how this goes!

As someone pointed out earlier. knowing and doing are two very different things.
This is gonna be interestin.

What are the chances that this is the dragon that demanded Medallions?

This is SUCH a good comic, I really like it!

Stories that begin with “The last surviving member, who brought all the eggs to this godforsaken place to keep them safe” always end with “Actually, the guy who stole everybody’s kids and hid them where they’d never be found, dooming the race.”