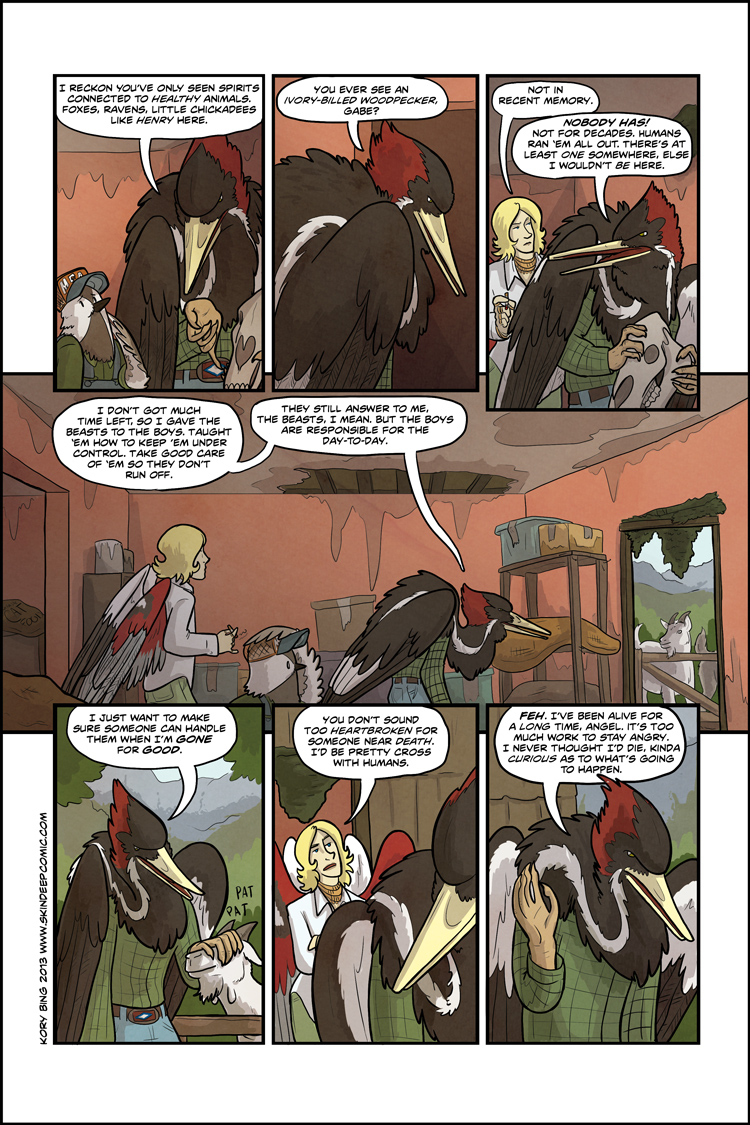 Have you donated to the Monster Pulse Kickstarter yet? Magnolia makes a dang fine comic!

More makes you want to go searching for ivory billed woodpeckers, buy the land they’re on and instigate a viable breeding program. That said Australia’s humans have a whole lot of extinctions to answer for.

Sadly, everyone saw this coming. The threat to the ivory-billed woodpecker was apparent back when the logging companies were given permission to clearcut their native woodland. They were asked to take steps to protect the woodpeckers, but refused. The woodpeckers would have tended to flee from the clearcutting and tried to establish themselves in new territories, but clearly ran out of suitable places to go. As for relocating them manually, well, people were a hell of a lot more gung-ho about capture and release (and rearing in captivity) back then, so I think, if it were possible, someone would have tried it. There may be other methods available now, but the population, if one even currently exists, may not be viable. The time when we could have saved the ivory-billed woodpecker may well have been and gone, I’m afraid. >:=(>

This means there are no baluchitherium spirit animals. So sad.

I’d have loved to see an eremotherium spirit animal.

Ditto lunar so much ditto…

Put that way, I suppose it would be interesting to see what happens… whether he’s just annihilated, whether goes into the shadows, perhaps to inhabit the dreams of timber magnates… “You cut the ground out from under me, severed my roots… Mind if I bide here a spell? Well, that’s too bad…”

If i can face my end with half that dignity, i will consider my self a man

Same here. Ivory’s attitude may be helped, though, by the fact that he’s had decades to adjust to the idea, maybe he spent the whole of the 1930s angry about it. If Ivory was born when Ivory-billed Woodpeckers still had a healthy population, he’s at least something like 150 years old. So like he said, he been alive for long enough to wonder what might come next.

Man/Woman aspect aside, Our culture has a lack of rights of passage, I sometimes think that is to our detriment in all aspects of life from childhood to old age

If I were the spirit of a nearly-extinct woodpecker, I’d have the remaining few little buggers in a nice big aviary next to my house and be taking very, very good care of them. Including setting out nesting material and playing romantic music.

I’d like to think the spirit of a specific animal would be good at locating the animals themselves.

The spirit of an animal embodies the traits of that animal, Could you cage what defines you to eak out a halflife from it?

We’d have to ask the spirit of the California Condor. Probably raises a glass of bubbly every time one is let go from a breeding program.

Then it seems you could

Nothing in nature ever goes gently into that good night.

Ivory billed woodpeckers totems – could vanish at any time

Oh, gosh, that is really sad. We’ve just met Ivory, and already I don’t want to lose him or her.

How are they actually found out that Nightmare belonged there?

how they actually know that Nightmare belongs there?

For all we know, Gabe could have had a little chat with it the previous night. I trust that it’s not only bugbears and fox spirits who find angels a tad intimidating.

Gabe seems to know that Ivory is in charge of the sentries and Eustace and Marshall seem to have been there before. My guess is that if Gabe didn’t already know, he could visit the avalon and get that information there. Besides, I’m hoping Nightmare’s aren’t that common so it’s only a matter of time before they find out who’s responsible for one.

Or maybe he just made the Grimms tell him where they swiped it.

Sorry to take away from the mourning over the ivory-billed woodpecker, but where’s the alt-text? Unless you just can’t get something funny off of this page, in which case I’m sad again.

Somewhat random connection, but apparently the ivory-billed woodpecker is on a list for possible a “de-extinction” project. When reading that bit of the article, this page is the very first thing I thought of.

does this mean Lynx Totems are feeling ill as well? we’re quite more numerous but on a decline. I adore lynx and have them as my personal spirit totem D:

Thats terrible cause as per Lore Lynx totems are keepers of secrets and ancient knowledge. So much would be lost if they died!

Wonder if tiger totems exists. India isnt known for totems but there are tiger related superstitions

In North America, there’s the Canada lynx up north, and the smaller bobcat everywhere. No matter how limited the populations of their big cousins may be, bobcats survive by lurking unseen, just about anywhere but in the cores of the megalopoli. They’re almost never seen; only the signs where they’ve been.

did you know that we have caused a major extinction event?

Yes. It sickens me.

They just announced it being rediscovered!

That rather undermines the feel of this page, but in the best way. Now, if only they’d announce all the other critters being alright as well…