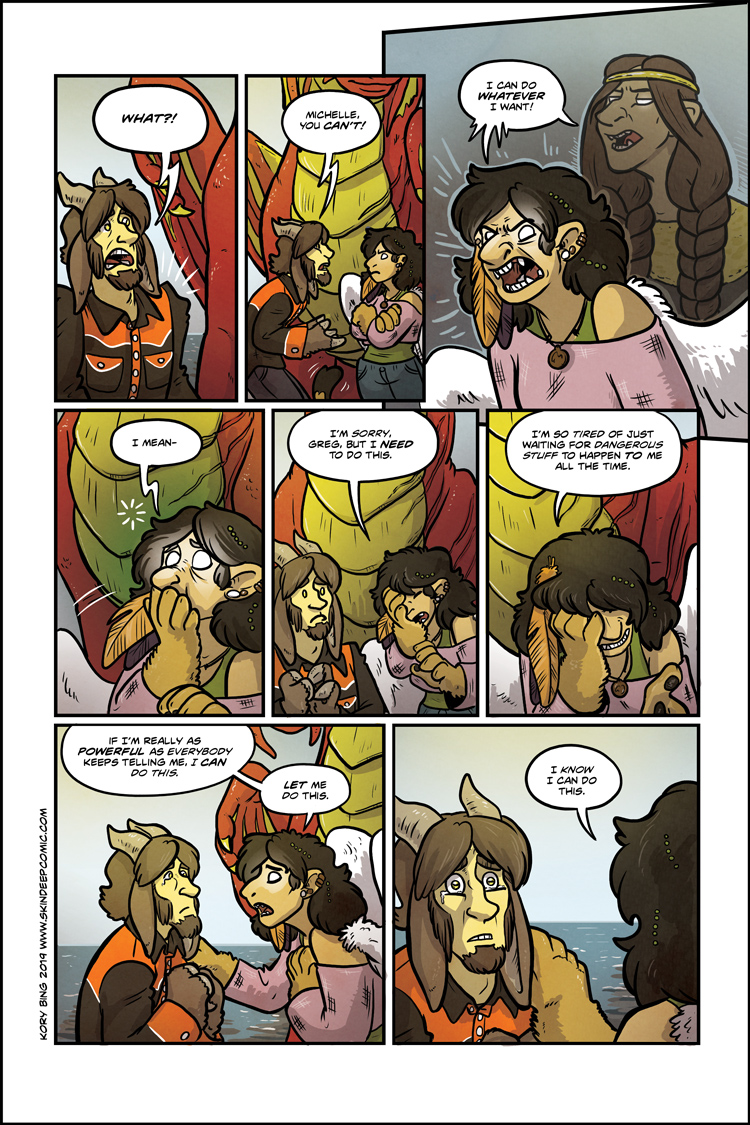 BUT WHAT OF POOR GREGORY

Go with her, Gregory. Be the support goat.

Considering his need to follow Michelle led to the poor blighter being here with her now, I’d expect that he’ll be following her no matter where she goes…

Panel 3 raises an interesting point.
When the personality is of a person is formed by her experiences and Michelle now has access to several lifetimes of new experiences, hiw much “Michelle” is still left?

I don’t think that her visions have ‘changed’ who Michelle is, it is just that she saw Greg and Bloodcarver’s argument as the replay of the same stupidity of that fateful meeting and she wants to see it end another way. Of course, then she goes and falls into the same arrogant response as her forebear and she realises that she is no better than them. She hopes that by stopping the cycle now it will not end the way it did last time… problem being, unless she suddenly gets some ancestral memory inspiration on the subject of medallions then there are still no new medallions and therefore no simple solution.

Ultimately, I see the last scenes showing that Meesh is still the same. She just wants the crazy to stop and while she knows now that she can never go back to being a ‘normal’ human she hopes that by taking control of something she feels she can, then maybe, just maybe, she can get back to her ‘new normal’ that does not include craziness like dragons kidnapping her.

Though I fail to recall if it was more visions (Parou) or “inheriting memories”. Kind of the comparison between “reading in a book” and “experiencing oneself”. One is fundamental part of the personality, the other just some tacked-on knowledge.

Regarding “stopping the cycle”… Looking back the whole cycle essentially was started by the sense of superiority and entitlement of the dragons, who were unwilling to meet the Sphinxes on as much as equal level, even though it was them needing help. Saying “please” doesn’t make it a proper request, when it is accompanied by death threats.

Currently it doesn’t look, like all that much has changed. Though the Bloodcarver at least tries to talk. Even if he makes clear that the choice is between saying “yes” and saying “no” but being taken anyway.

Huh, if she had all the knowledge and experiences of another person, rather than random snippets of information (which is how I was reading it), then yeah…hope the old sphinxes really were nice people.

Well, there is the point that they were trying to help Mythics to survive and avoid detection and elimination by Humanity.

Who knows, in time, they may have figured out a way to hide Monsters rather than rely on the Avalons.

I don’t recall any mention of recompense for the time and effort they were putting into it? Just … a queue of medallion recipients.

Considering everything we know currently, that doesn’t seem likely

Hey, Michelle. Dial it back, there. The other sphinxes were pretty powerful, too, and look where they are.

Their power is inversely proportional to their general population. Which, in my opinion, is something that’d make Darwin pop a gasket.

Yeah but she has been tempered by being humble. She now can use what the knowledge of the other sphinxes and their power to fix what they did not want to because they(as a group) were overgrown ignorant house cats. Yes there were few that tried to do the most for the Mythic community as a whole but their actions were cut short by the other sphinxes. Look at Jocasta, while yes she was against dragons but was willing to hear them out until they started to make demands.

Why do you think she put her paw to her mouth?

Michelle is gunna be the dangerous stuff, this time. It’s ok Greg. Go with her. Be supportive.

Poor Michelle, so busy throwing stones at Bloodcarver and Greg and then she suddenly realises she is living in a glass house.

This is looking more and more like an interesting if uneasy alliance. Twill be interesting to see where these three go from here. I felt for The Bloodcarver when he had his discussion with Gabe and we saw that he was operating on a set of morals that seemed fairer and more compassionate than Gabe’s. It seems as if there may be hope for the ‘sadsack’ if these three can get some help from someone or something that has the lost information that they will need.

OTOH, do keep in mind Gabe is an angel. Archangel.

Gabe’s role is apparently being the neutral observer until someone REALLY goes off the rails and against The Rules Set From On High.

Unless, of course, the limited immortals or mortals can handle it themselves. In which case, Gabe just sits back and observes.

So Gabe’s morality is dictated by the rules set On High. And Gabe cannot go against The Rules.

Yeah, she so can’t do this.

This story is truly wonderful, and I appreciate all the effort that must go into it. You make my Tuesdays!

The most important part of summoning Captain Planet.

I thought that was the rings. ( Joking.)

“Fine. You’re not going alone. I’m definitely going with you.”
“I knew I could count on your hel-”
“No, I mean I HAVE to go with you. I can’t swim like three hundred miles.”

Michelle? Are you sure you’re okay? You seem more than a little unstable…

Maybe Greg can accompany her, but, well, hopefully he won’t try to speak for her again.

Michelle is Sphinx. I can’t wait to see how that heritage plays out–and it seems keyed up to a fever degree, right now. :3

I can see one big difference between Michelle and her forebear. In a practical sense. She has more lisence to be arrogant. Not super arrogant, mind, not blind arrogance… but her ancestor was a sphinx in a time when there were hundreds of sphinx. … She’s the only one. She’s the last one, and all that power is concentrated in her. She isn’t just more powerful tan her ancestor, she;s several orders of magnitude more powerful than her ancestor.

Granted, I’m not saying she should strut around like she owns the place, thinking she’s above reproach or anything. But if anyone can put a foot down, and follow through on it, its her.

Now, to give it to Greg, I’m pretty sure there have been one or two people who said the same while standing on very high places…
Lets just say not all of them were right…

Considering everything we know currently, there’s a good chance they weren’t

Greg has an Issue. He thinks she has to need him because he believes it’s impossible for anyone to simply WANT him around. He needs therapy. So if she doesn’t need him then obviously she doesn’t have ANY reason for him to be there so misery commences. He has almost no identity or sense of self outside of other people’s approval and/or perceived need for him.