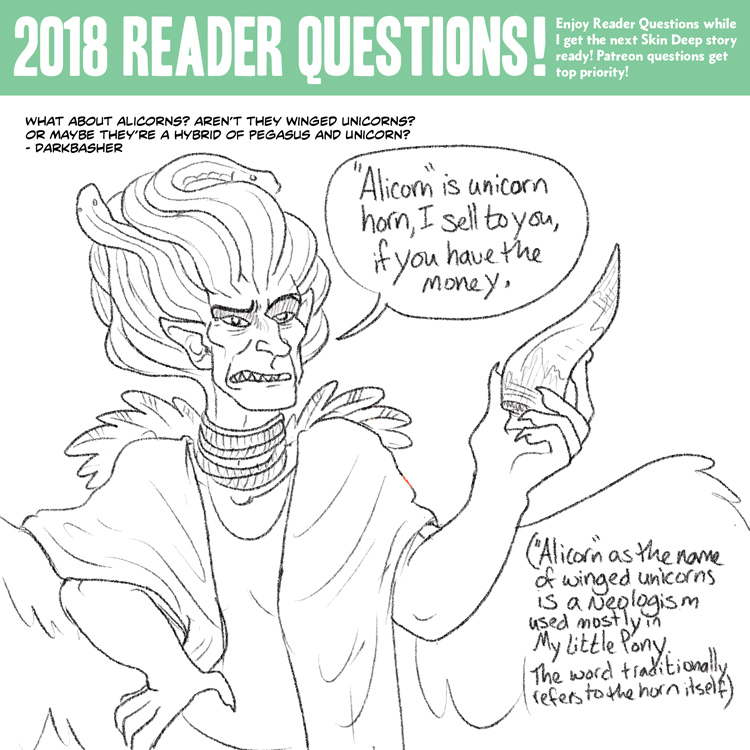 As far as I know, calling winged unicorns “alicorns” is used mostly in My Little Pony and the actual term of “alicorn” traditionally refers to the unicorn’s horn, which has a ton of healing properties. You can find a few alicorns here and there in Skin Deep, and you can buy one for a hefty price.

The word referring to the horn itself makes so much more sense. Others outside of MLP usually refer the other (unicorn with wings) as a Pegacorn.

Wait, if unicorns are extinct then how the hell did she got a unicorn horn?

Presumably this is a relic/heirloom that’s been handed down for thousands of years. While “grind up animal bits and use the powder” is one traditional way of using such things, “touch the unicorn horn to something” has enough precedent that I can see some of those relics surviving, especially if you aren’t sure you’ll ever get another.

Now I’m waiting for some medallion-bearer in biology to go “Jurassic Park” on one of those horns. (Even just sequencing DNA fragments and finding out what unicorns are related to would be informative.)

More or less the same way she procures medallions while none of the medallion makers are around anymore, I’ld guess …

That’s probably what makes it so expensive. It’s like mammoth ivory, which in some places is the only kind it’s legal to sell or own.

given it is her, i have no doubt that the horns she has are the real deal. but i suspect she has to sort through a lot of fakes to find those. selling narwhal tusks as alicorn’s was a popular medieval scam, since rich people and nobility were always open to buying items that were supposed to protect them from illness and poison, and the narwhal was not well known outside the far north. the commonality of narwhal horn fakes is one of the reasons we perceive unicorns as horses with pretty spiral spikes growing out of their heads nowadays, rather than the big fat shaggy and ugly beasts the medieval bestiaries described it as. (very high probability those were actually based on sightings of Elasmotherium sibiricum, the Siberian “wooly” Rhino, which was recently discovered to have survived right up to the end of the last ice age (instead of dying out nearly 150 millennia before it as was thought), and possibly had small remnant populations well into historic times.)

It’s about as legitimate a term for a winged horned creature as ‘alippus’ is for a winged horse, at least. Both are a mixture of Latin and Greek, but more importantly both terms sound good and are easy to say!

We don’t need Unicorns anymore now that we can mass produce glitter using mundane methods. If only we could have discovered the technology soon enough to save them!

As a 30-year veteran of the Alicorn Wars, y’all got me curious, so I did some quick research to fill out the gaps in my memory.

For at least thirty years now, I’ve been hearing these arguments crop up any time someone called a winged unicorn an “alicorn.”

The earliest *documented* use of “alicorn” as “winged unicorn” that I could find was in Piers Anthony’s 1985 book, BEARING AN HOURGLASS. Mr. Anthony himself, however, has noted that he first saw the word describing a statue of a winged unicorn, so the informal usage was already established.

Amusingly, the first two seasons of MLP: FiM didn’t use the word “alicorn” at all. The only two winged unicorns around were distinguished by the title of “Princess,” with no attempt to ascribe a species; the appearance of a third Princess, also winged and horned, passed with a surprising absence of in-world comment.

The word was making its rounds in the FANDOM, but not without objection, for exactly the reason depicted in the comic above. In the middle of Season 3, the word was used to describe an amulet that depicted a horned head flanked by a pair of wings, but it still wasn’t clear if the Alicorn Amulet was named for what it *depicted*, or what it was *carved from.* The latter would be rather disturbing in a setting where several main characters sported that particular accessory.

The finale of Season 3, when the show’s primary unicorn protagonist leveled up and sprouted wings, was the first time MLP (in any generation) used “alicorn” to mean “winged unicorn.” One gets the impression that the writers’ bullpen argued about it as much or more than the fandom, and only resorted to that particular term because every other option was frankly gawdawful.

(In the show’s mythology, Alicorns share the attributes of THREE flavors of equine: in addition to Pegasus Flight and Unicorn Magic, they have the stamina, strength, and affinity for growing things of plain, unadorned “Earth Ponies.”)

As a final note, there’s a common assumption that winged unicorns are a modern creation of commercial artists cranking out cheap ceramics, gaudy stickers, and airbrushed vans. I was surprised to discover that, per Wikipedia, winged unicorns appeared in art from ANCIENT ASSYRIA, c. 800-900 BCE.

[Your Obedient Serpent doffs the fedora, seals it in an SCP vault]

Somebody get this serpent some cookies, STAT. You have earned them, my friend. All of them.

I salute your knowledge, sir.

God, I didn’t realize that series was so old! I loved the Incarnations of Immortality series when I was younger.

Just to be clear, you aren’t unintentionally confusing the sirrussh, which is an Assyrian dragon, with these winged unicorns? The fact that it had feathered wings and a single forehead horn doesn’t detract from the snake head and lion hindquarters.

I’ve never run across the sirrush being depicted with wings at all, let alone feathered wings.

From what I’ve read, the Assyrians did also use both winged unicorns and winged bulls in their symbols.

Both winged unicorns and winged bulls do seem to be depicted in ancient assyrian artwork though.

OMG, check out the new Netflix Shera…. It’s like halfway through.

I was wondering at first before I read the page, where she would have gotten an alicorn, unless it was a passed away elder, without slaying one. Now that I’ve read the text and comments, I would assume any alicorns that still exist in the world are ancient relics of a time long past.

that is a fact that has made me giggle

An interesting bit on the etymology of “alicorn” that I remember from the book
‘The Lore of The Unicorn’ by Odell Shepard.
Old Latin for ‘horn’ was ‘cornu’, and adding the definit article ‘li cornu’: The Horn.
And somewhat mistranscribed into Arabic, The Unicorn Horn became ‘al licorno’.
And then again into European languages/English we have The Alicorn as the name for the horn of a unicorn.

That DOES bring up a question of what the Mythical Unicorn is, however, as that horn looks suspiciously Rhinocerous-like; It’s been commonly accepted that the myth of the Unicorn was in fact referring to rhinocerouses, who were ‘horses’ in much the same way that Hippopotomi are “River Horses”. And the original descriptions were much less “Horse-with-a-horn”: Described with deer heads, goat beards and hooves, boar tails and marvelously colored coats (sometimes with lion-like manes, as well). As they were also said to make no hoof sounds when moving, it could be expected that these terms are indeed describing our less-than svelte ungulate friends.

Were, then, mythical Unicorns a little more… stumpy?

Or could the Legends trace back to this?
https://www.theguardian.com/science/2016/mar/29/siberian-unicorn-extinct-humans-fossil-kazakhstan

When I first saw the word (in the MLP:FiM fandom), I assumed it was a portmanteau of “alate” (meaning “with wings”) and “unicorn”. I have since seen nothing to support or disprove this…

I always just called them Pegacorns, tbh… 5 year old me was very creative.

Dang. To be honest, i’ve never seen MLP. Not once. i think i heard about it one time and the name stuck so oh well. :P