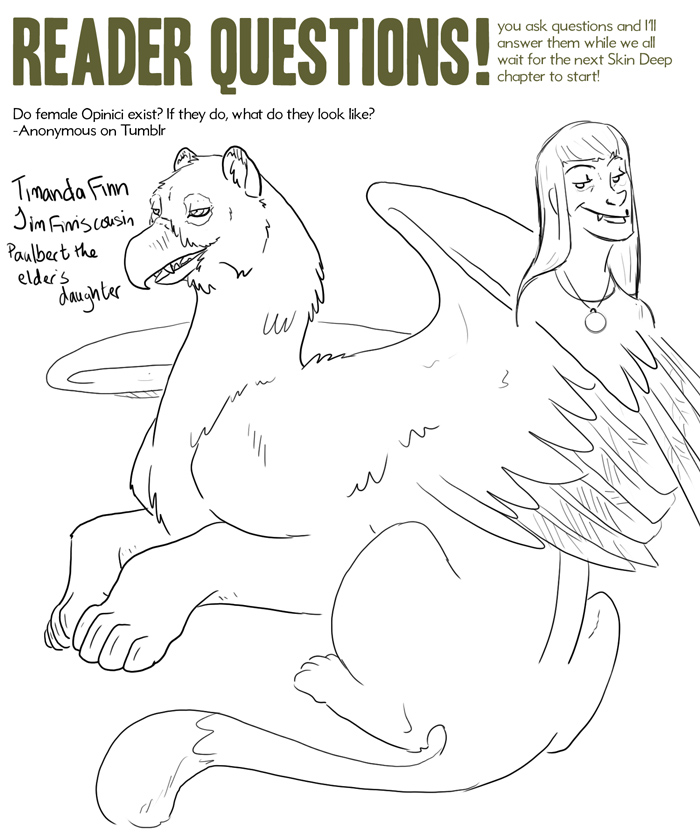 Reader question reader question! If you haven’t noticed, I have mapped out a lot of the Finn Family that won’t see the light of day in the comic for a long time, so until then you get to see little snippets of it here.

Jim and his family are the main branch of the Finn Family, but Jim’s father, James, has a younger brother named Paulbert (Jim’s brother Paul is named after him), and Paulbert is the head of the secondary branch of the Finn family. He fell in love with a human in the early 60s, and had two children, Tim (shown here) and Phin (briefly mentioned in passing in Exchanges: Handshakes). They are quite a bit older than the Finn Brothers, as gryphons generally live twice as long as humans, and Jim’s parents didn’t start having kids until the late 70s through the mid 90s.

I hope you enjoyed that little bit of info that will likely not play any important part in the comic any time soon! Hooray!

The main difference between male and female opinici (aside from the mane, of course), is that females have a feathery head and neck, while males only grow feathers on their wings and back.

She looks beautiful! I can see the Finn resemblance in her human form, too!

And from your deviantart scraps, I can see that you’ve changed her beak shape. :D I like this kind, better.

And since we’re on the topic of the Finn family, what does Tobias look like in human form?

Okay, I’ll ask a question. :)
I have to wonder, what is Elise’s family like? Are they all as…spirited as her?

So…how did Nancy Smithson take to the idea that her husband-to-be, Paulbert, was an opinici? Did it freak her out at first?

And what’s Mary Finn’s side of the family look like (in human or mythological form), being that many are Wonderlanders?

Nice :D i just started reading and its epic :D

Cool! The comment before mine intrests me, though. What does the rest of the Finn family look like as humans?

will we see her in heartaches 3?

Chapter 2 was called Heartaches. I think chapter 3 is Hello Goodbye.

When do you add new pages? or do you just add them whenever your finished?

I am taking a break between chapters right now, and new pages will start going up in February!

Cool :D i wonder what will happen to blanche and harpy boy :D(if he is a harpy)

What is a mythical creature that you would like to have in the comic but isn’t in it right now?

Whats your favourite character to draw?

I was wondering, since the Finn Family are from England…
In English Heraldry, a male gryphon can sometimes be flightless. These gryphons will have rays or spikes instead, and sometimes even horns. They’re sometimes called an Alce, or a Keythong in the same way a female fox is a vixen, but more commonly they’re just called ‘the male gryphon’.
Does the Finn family have any of these flightless birdbeasts among them? :>

I think Toby e.g. Tims second youngest brother might be one?