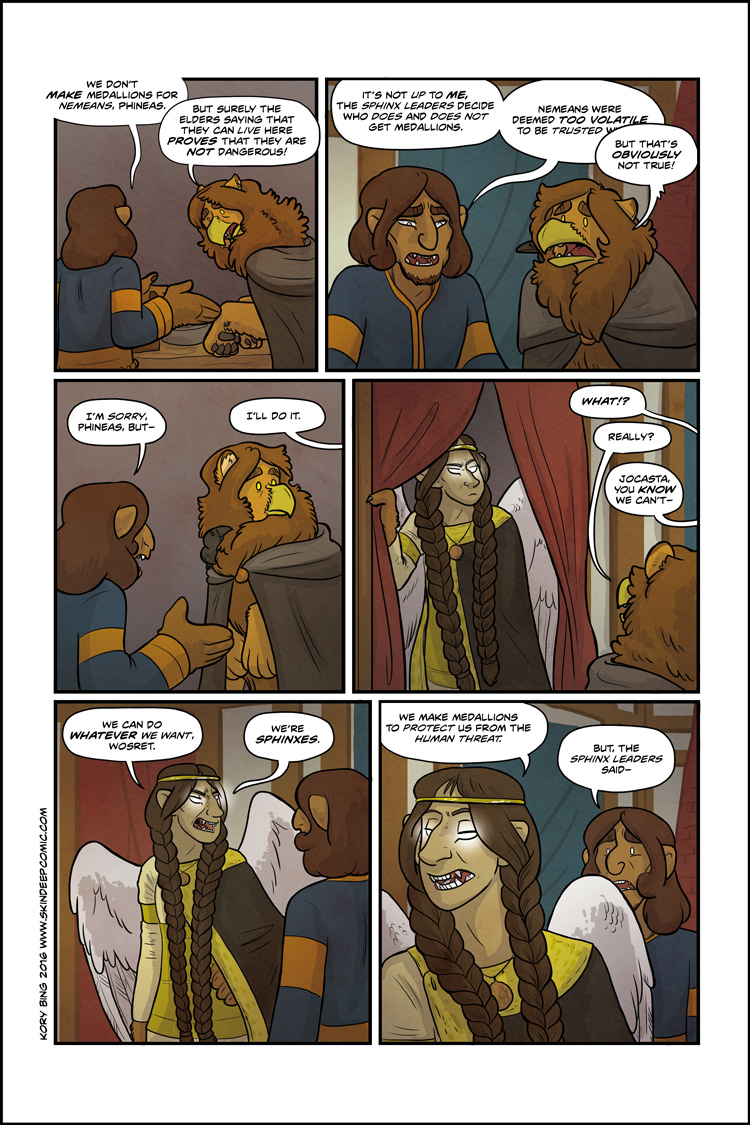 I’m running a charity sale right now on all my PDFs! 100% of all proceeds goes to the ACLU! 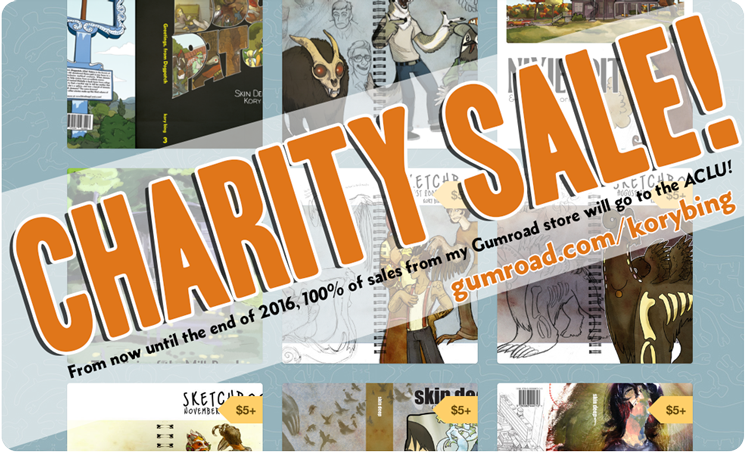 I’m in the process of making some new PDFs as well, including a new PDF collection of all my Patreon Bestiary pages! 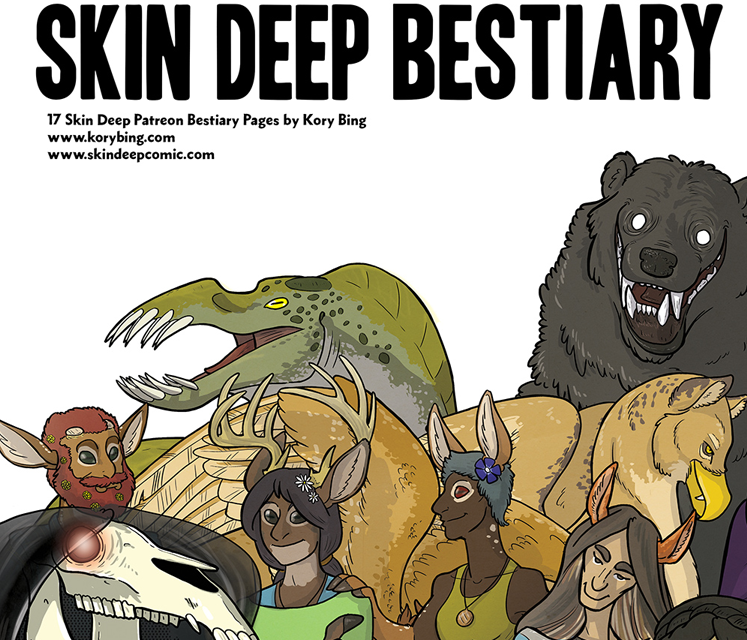 So check it out if you can! Gumroad has also pledged to give all their fees and costs to charity too! It’s a win-win for everyone!

Sphinx leaders? Screw those jokers! Make medallions for everyone

Like I said i think the merits of who they are and aren’t allowed to make medallions for is dependent on who is the least likely to blow everyone’s cover. Nemeans might be able to co-exist in an avalon with other mythicals who can take a punch, but the first time anyone forgets their strength (or gets pissed enough) and puts a human through a wall the cover is blown.

That premise is slightly shaken by the existence of natural shapeshifters, which already clue humans on where to look when encounters with other creatures significantly decrease.

Gosh, Kory, I love these new (relatively) characters! Thanks for writing and drawing!

Annnnd there goes my hope that my theory of the sphinxes being elitist assholes would be proven wrong.

The Sphinx Leaders are elitist arseholes.
It would seem however, that there are Sphinxes who are not so fussed with the Attitude of the Sphinx Leaders. And some are at the point of going out and breaking the restrictions.

I don’t think anything has appeared in the comic to prove that they are. There is a fine line between ensuring survival and making reasonable provisions and being an elitist asshole. also if I recall right it was the Manticores who had the terrible reputation not the Nimean lions so hopefully there will be a clarification of why.

I’m not saying I believe that they are elitist assholes, it’s just that the way Jocasta said “We can do whatever we want Worset. Were Sphinxes.” leads me to not having hope that my previous theory about them would be proven wrong.

Neither was I, but I will say that I raised an eyebrow at the way Jocasta said what she did.

Manticores, as you describe them is pretty much how Ike described them in page 4 of chapter 3 of Exchanges.
http://www.skindeepcomic.com/archive/hello-goodbye-4-a-whu-gane/

Nemean Lions, it seems are going to get a chance to prove they CAN be responsible, simply because Jocasta is about to go and break the limits foisted on the smiths by the Sphinx Leaders.

I’m now wondering what happens to the other races, why they were not given a chance as well.

She is not a person I would want to piss off.

Poor Wosret. He’s doing his best but the rules keep changing on him.

Wait, I can’t tell. Is Jocasta female or male or neither or what?

So I was right! which species do and don’t get medallions are based on which ones are the least likely to blow their cover! I guess it makes sense considering all of the sentient species without medallions we’ve seen thus far are predatory, and are specifically known for preying on humans, which increases the odds of attentions being drawn to them. Plus.. You know…. for the hopes of open co-existence sometime in the future

Given that Jocasta calls it the human scourge, I’d guess she’s more focused on the current issue tho.

Going by the disagreement between Wosret and Jocasta on the matter, I would venture to say that the Sphinx Leaders do not give the individual Medallion smiths any leeway at all. So I think Jocasta is about to seriously DO an F-U to the restrictions laid down by the Sphinx Leaders.
To quote Nanny Ogg from Discworld “When you break rules, break ‘em good and hard…”

I honestly think it’s less ‘which ones will blow our cover’ and more the predisposition toward mythological racism. (The argument is also moot when you consider that any individual of any species would be more or less likely than the next to be stupid about it; Phineas here seems like a poor candidate for a medallion, even if gryphons as a whole are arbitrarily considered ‘safe’.)

While most of the monster species we’ve seen so far all have bad reputations (manticores are poisonous, chew through anything, and have ‘notoriously’ bad tempers; harpies preyed on sailors and led them close to devour them; gorgons turn people to stone because Medusa was just plain ol’ evil; the dragons are jealous and dangerous, but the Bloodcarver clearly took no joy in his work with the demons and had no desire to harm Michelle as ‘an innocent’), this is only in terms of mythology. All of the individuals we’ve seen of these species have been just as human as anybody else, and one would assume that, if they had a proclivity toward ‘monstrousness’, it would only have gotten worse with time and discrimination, not better.

This is evident in Jocasta’s attitude, too; while she’s clearly more open to the idea of distributing medallions to anybody who needs them, she expresses the same racial arrogance. “We can do whatever we want, Wosret. We’re sphinxes.” She’s using this attitude as an excuse to ignore the racist policies of the sphinx elders, but it’s just as self-absorbed as them; I can break the rules because I’m a sphinx. We can decide, effectively, who lives and who dies because we are sphinxes.

Little wonder the dragons got fed up with the situation. I’m willing to bet they weren’t the only ones involved on that side of the Great War, either– they just have the dubious honor of being the ones that were wiped out.

It’s like I said a few pages ago, my theory is that the Dragons and the Sphinxes wiped each other out is because they both felt that their own species deserved to do whatever they wanted.

Dang, the amount of time it must take to get all that luscious hair into braids.

I knew a lady who had hip-length hair that she braided similarly to Jocasta’s. The actual braiding went pretty quickly — about 15-20 minutes per side. It was the brushing and combing that took the most time — about an hour, double that when she washed it. (About every other week.)

On another note, it’s so nice to see things being revealed and theories proven right and wrong. Interesting to think that such a simple choice of ‘who is dangerous enough to not be given a medallion’ would lead to so much prejudice later on; and the fact that Jocasta will (seemingly) risk her position to provide safety to others even against the will of the elders is an interesting one as well.

The Attitude and resulting actions by the Sphinx leaders also makes another possibility for the Great War.
The Dragons deciding that if the Sphinx Leaders will not let EVERYONE have the safety of Medallions, then NO-ONE will have that safety.

Thanks for making it possible to buy a copy of the PDF of the Bestiary :)
Will you be posting the news about this PDF over on Patreon?

Oh the rebel!
Which means that Phiny must not have known any Harpies. My one niggling lore hope. Dragons I guess were lumped in with the dangerous. So who are these Sphinxian elders and could they still be alive? Just who is the Mistress? Could it be a power-mad Jocasta, still alive?

Phineas was concerned about his Nemean friend. Not Nemeans in general. So I strongly suspect that Harpies would, in this matter, be lumped in with other species in general that Phineas is not worried about.

It’s possible that Michelle may learn how to make medallions out of this. If she does learn (it seems likely, but remains to be proven), she could presumably start making medallions for anyone she wants.

Now I’m sort of wondering why Jocasta actually bothered to make medallions for bugbears, who are notoriously solitary…

Maybe she figured the Universe itself would eventually nerf them for being too overpowered. Tough luck.

From a political standpoint, I’d want the magical nightmare bears who know where everyone is to be on my side of a war, not the enemy’s side.

So the greatest societal divide among the mythical community boils down to consequences of past politics and luck. That is… similar to the nonmagical situation, actually.

Ooh, I was thinking it was going to be something like this since present-day nemeans can get their medallions revoked due to violent behavior.

Anyone can get their medallions revoked (temporarily or permanently) due to violent behavior. It’s just that Jonathan “Merry” Merryweather Lyon proves the Sphinx elders’ point. Remy and Lorne are obviously proof that the elders are “tarring every Nemean with the same brush”, so to speak. That is to say, SOME Nemeans are volatile, but definitely not all of them.

Oh wait, Jocasta is a she? I thought we were seeing a young version of Michelle’s father.

The hair didn’t tip you off?

Hair is not always a telling point. I have known many men who grew their hair long for one reason or another, for just a while or permanently. And many wimmin cut theirs short. You just can’t assume.

When was the last time you saw a man with silky smooth hair reaching all the down to their feet? Also, “wimmin”?

Well, if my former co-worker Chris has let his hair continue to grow, then by now he’d have silky smooth hair all the way to his feet. Last time I saw him, 15 years ago, it was down to his waist.

But somehow, I doubt the university would allow him to do that, even if he wanted to. (He works in the Computing, Telecommunications, and Information Systems department, aka CTIS, for Texas A&M-Commerce.)

Yeah, I always see one when I look in the mirror.

How often do you see *anyone* with hair that long? I’ve seen as many, if not more, men with hair all the way down to their butts as I’ve seen women.

Back on page 23 of Illumination, chapter 1, Ravi said, “After all these centuries, you look just like her!” and, “You still carry her name!”

And, remember: Michael Jocasta was unTurned, and his shade took the shape of a wingless Egyptian sphinx like Wosret.

Plus the excellent replies above me, winged Sphinx are usually depicted as women… I suppose they could be guys as well, in this world, but if I see a winged Sphinx I always assume it’s a female.

Also these guys lived centuries ago, they’re Michelle’s ancestors, not anyone closely related to her.

Nobody tells Jocasta what to do

YES!
Monsters aren’t species that are incompatible with medallions, they are just species who had not yet received medallions or had been deemed too high-risk! I knew it was something like that!