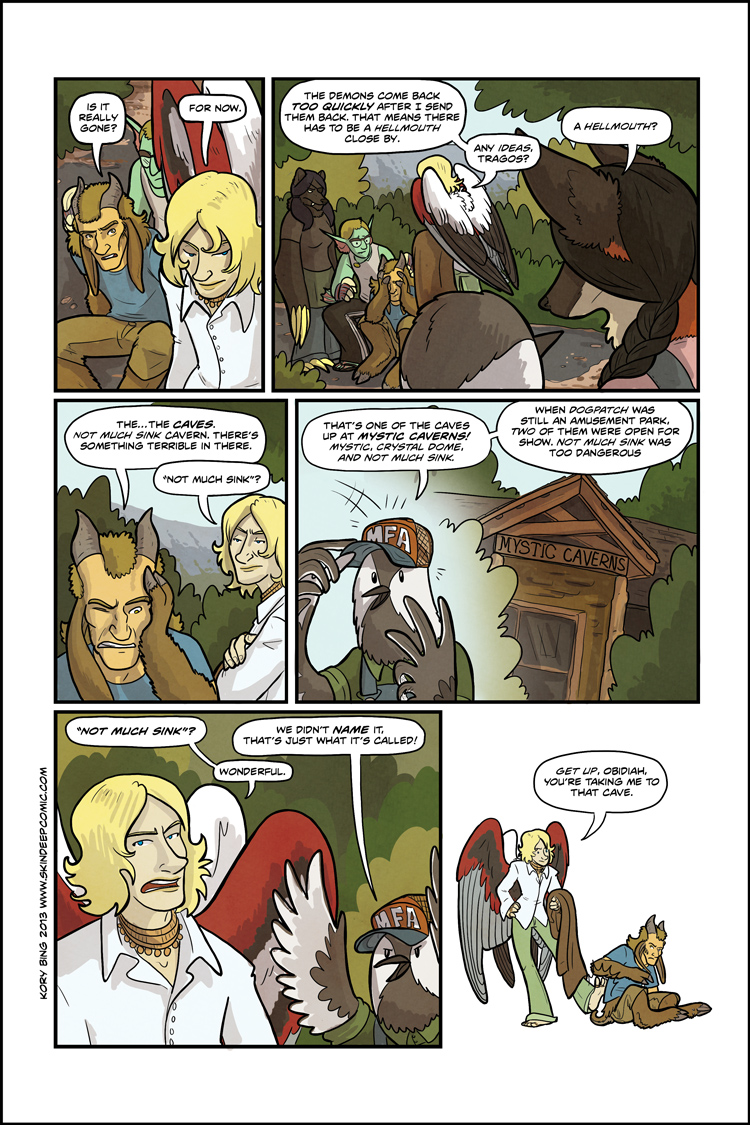 Hehe, not much sink. I wonder what it looks like.

Give the guy a break Gabe, he’s just been possessed by a demon for a unknown length of time. Given what’s happened to him and your rudeness he’s being quite helpful.

To be honest, he’s really grumpy but he needs to move fast and close this thing for their own good. The way he acts is kinda autistic really.

I kinda feel like I should being saying “fuck you” here.

I’m all for reading characters as Autistic or otherwise nerodivergent(aside from when people are using gross stereotypes or misinformation to come to such conclusions.), and if done /right/ (which is sadly rare/almost non-existent occurrence) I’m more than all for such things being cannon in stories. But what you just said really seems more like a Autistic = “moody-asshole-who-thinks-they’re-better-than-you”. Which isn’t to say Autistic people can’t be assholes, but when they are being assholes that does not mean they are “acting Autistic”.

I’m autistic, I’ve been around a lot of autistic people. I’m saying he seems to lack some social skills.

I’m not saying that h\she is a bad person or that that is a bad thing. I quite like him\her as a character.

-tilllltttssss head- Uhm as an autistic person I don’t really see where… you’re coming from with that… I mean I guess I VAGUELY do but really that’s a misunderstanding of the way we think. We CAN be moody, yes, and we CAN rush into things, and we CAN disregard how other people are feeling – but there’s a lot more to it than that. Gabe is doing those things because of /the situation/, not because of a way of thinking. (Which is what it is, honestly, much more than a “condition”.)

P.S. The way I describe autism to people who don’t experience it, or know anyone in a close, personal manner with it, is like this: everyone, generally, thinks inside a box. They may look outside it, or even take a step outside, and gather some ideas from another place. Autism is being outside the box, knocking, and no one hears you to let you in. But that’s okay! Because the box is kind of boring and crowded anyway. You’d much rather be on the outside to begin with. :3

Well, everyone’s different — I do kinda see where zzzx is coming from. I hadn’t thought of it, but now that the headcanon’s been mentioned — well, I’m never not for headcanoning characters with my neurotype.

I know that I can get frustrated and start bulldozing (or attempting to bulldoze, I’m not very effective at it) others when there’s a task I need to finish and I feel like they’re slowing me down or getting in the way, so I do sympathize with Gabe here. Not to say that it’s a good way of handling the situation, but I do understand being stressed and getting like that.

Or a band name, even. I’ve checked, and I don’t think it’s been claimed.

It’d be a great name for a Christian punk band. XD

Kory, you’ve made me do something nobody has managed to make me do in a long time… you convinced me to do a bit of research on Not Much Sink Cavern. There’s surprisingly little information about it that I could find.

I just really like that the places about the characters are real. Goo goo backroads and backwoods of America :)

I just…I love Hank so much.

“Not Much Sink.” And suddenly, I know why I still read this comic ^_^ lol

the concept of the Hell Mouth did not originate with Buffy.

this picture of a hell mouth is almost 1000 years old

Hank at panel 5 is so cute! Throwing the “Not Much Sink” bs name at Gabe.

It’s not BS. That is actually the real name of the cave. :)

Take a look at the second paragraph. “A third cave on the site, Not Much Sink cavern, has been deemed too dangerous to allow public tours.”