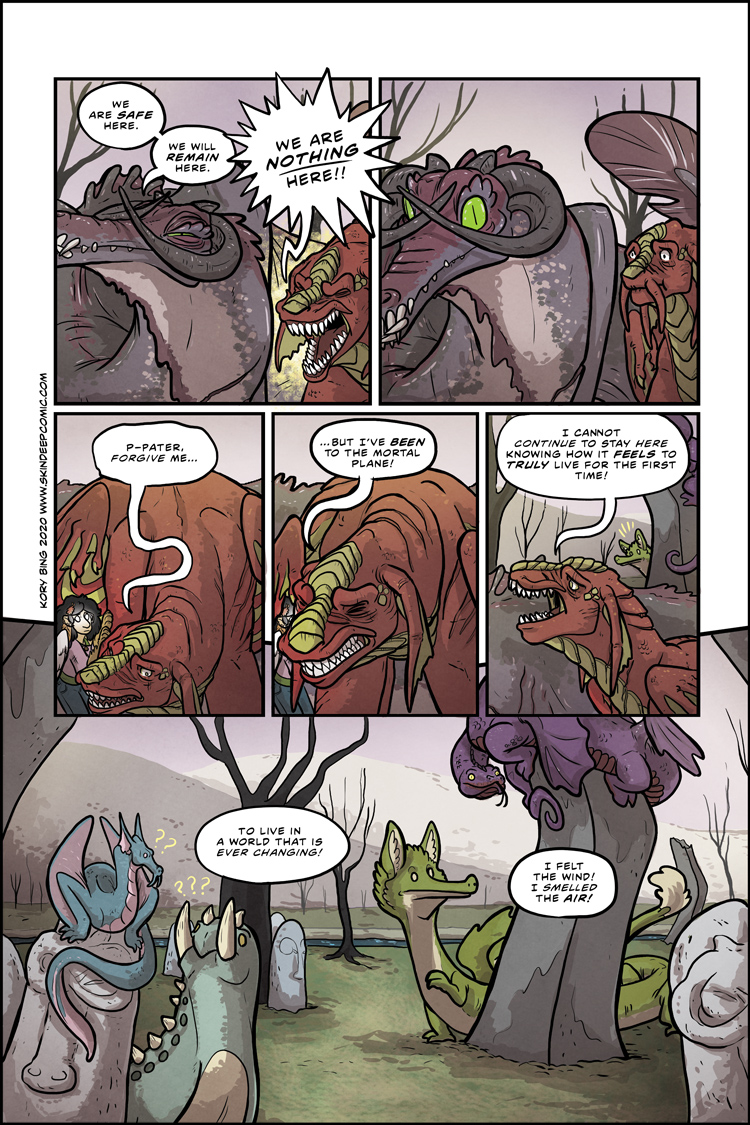 This conversation appears to have an audience.

This will not end well for blood.

Father will have a harder time standing his ground if literally every dragon sides with Blood, or at least the grand majority

I love that second panel, just… Both of their expressions. Also, the watching dragons going “????”

how much vanity does one need, in a world where everything fade quickly, to force other to constantly spend effort into carving and placing statues of oneself instead of seeking essentials ?
especially as those statue will fade long before the model does .

like many abuser, father gaslight his follower into thinking that they should be glad to have the little they have, that they dont deserve more and would never be able to get more than what he provide, and that the outside world is dangerous and hostile

I wonder if the monuments are a misguided sense of purpose Father is trying to give the dragons. Life isn’t hard here, just meaningless, it’s not like they will starve, or be attacked if the don’t defend against that, but I can see boredom leading to discontent. giving them the job of making monuments may be more busy work than abuse.

Consider that Bloodcarver earlier stated that anything built crumbles quickly into nothingness again. The statues must be very short-lived. The demand that they be made when they are labor-intensive, begin to disintegrate almost immediately, and serve no useful purpose seems unnecessarily cruel in terms of ‘ways to evade boredom.’

And they’re not life-sized, so it’s not just a matter of Father doing a quick faceplant before they use the mold [link]. >;->

“Part of your world!”

That’s my kind of plan. Crazy but caring. How can I help.

well first you need to believe in yourself, as that is the only way to get the raw power to do that. after that I would sudgest to eat a bunch of kale, as you body and soul with take a beating doing that, so better be as healthy as you can be.

Michelle Looks like she’s thinking of doing that herself.

Wait, a tad confused. I thought Bloodcarver brought Michelle here on orders, if it wasn’t his idea, then why was she wanted?

It appears Father here just wants to be a racist jerkbag. I assume he wants to exterminate her before she can get any reasonable amounts of power. There’s also the likely ideas of torture and jailing. But I bet he’ll just want to kill her.

Had he wanted that, she’d be dead already, I think.

Perhaps some kind of sick revenge, to make her suffer as he did… a detail is, he’s been doing the same to all the other dragons
The Father is truly a sad and very bitter character

I think he just wanted Michelle brought there purely to imprison her and keep her there forever.

He’s content to have everybody stay trapped in this place forever.
He doesn’t want things to change, but he knows a sphinx can free everybody.
Trap the last living sphinx in a place where she can’t do anything, and his problem is solved.

This is looking to me like a very classic pattern of abuse. The abuser does whatever he (or she) has to do, to keep the abused in his (or her) power. Even if it’s horrible for both the abuser and the abused. The abuser fears losing that power more than they fear a life in continued misery.

Michelle is the sole entity who could make it possible for the new generation of dragons to live on Earth / In the Mortal Plane. That would break Father’s control over them.

In order to make sure the new generation of dragons doesn’t escape his power, he has to either kill Michelle or else be such a complete jerk as to convince her that dragons are intrinsically evil and therefore must NEVER have amulets.

Lucky for him, if he tries for the first and fails it’s likely that he’d achieve the second by default.

*EXCEPT* if there’s rebellion. Bloodcarver here standing opposed to this plan runs the risk of convincing Michelle, even if she survives, that there are non-evil dragons, and therefore medallions that would allow the rest to escape are not necessarily prevented. Bloodcarver is fucking up Father’s plan by being sympathetic.

Logically, on the chance that he might not succeed in outright killing Michelle, it has now become necessary that she must witness him killing Bloodcarver painfully.

Don’t you hurt that baby boy…
Thia comic is full of emotional rollercoasters and I am always so excited for every update!

Michele seems worried for Bloodcarver. With her temper I wonder what is going to happen.

Reverse lizard walrus next to the blue dragon

Michelle reaching out to him in that fourth panel, just, holy crap. She went from super mad at them all, to super empathetic with Blood right away.

And I’m really scared for him now.

I think she’s realizing, very quickly, what position Bloodcarver was put into, the situation he’s in and what led to this point in time.

And that she and him are very much alike in that. Neither asked for the situation they’re in, but they’re in it, nonetheless. And decisions are being made that impact their lives and they have little say in the matter.

Even worse. She at least received help, Bloodcarver has been betrayed by his leader.

Well this is breaking my heart (also super well written so far, like, damn)

The kids say the darnest things, am I rite? XD

This is really playing out like some fantasy family sitcom… And I’m loving it. <3

Any minute now Bloodcarver will storm into his cave and start playing K-Pop to the max, with Father yelling "You stop listening to that ping-pong music right now, young dragon! Why can you listen to proper Death Metal like your darling little sister Screaming Slasher?"

I desire to hug at least two of those dragons.

I have an itchy feeling that this might result in exile in the “if you like it so much there, stay there and get killed by humans” sense.

“This conversation appears to have an audience.”

I would think so. It’s basically the only interesting thing going on in their whole world.

Jesus i just wanna go up to blood and give him a hug. He does truly seem to want what is best for Dragonkind. and i kinda feel for him. It looks like even Michele is realizing that Blood is strangely on her side.

same!! what a good noodle!

Relevant quote, (Wilson) “See, you in the batter’s box now. You swung and you missed. That’s strike one. Don’t you strike out.”

Oh boy… I’m getting the feeling Bloodcarver knows he stepped in it, but he’s *absolutely* not wrong.

So I just went back to Orientations to check…. Bloodcarver did not have those ridges/scars on his neck and shoulder back when he first kidnapped Michelle, and I don’t think it’s just an art shift to blame. Dis Pater roughed him up pretty damn good. I’m more and more ready for Bloodcarver to overthrow the mean old croc and become new leader of the dragons. Our boy deserves better.

And Father broke his ears ridges. His ears are hanging down now. And if nothing heals in Dis then to recover Bloodcarver would need to spend some time on Earth so his wounds would stop hurting.

Not an art shift.

He’s felt the wind! He’s smelled the air! He needs a hug!

Something that’s occurred to me is that Bloodcarver was the one who went out to do this. The Father *selected* Bloodcarver to go out and get The Sphinx (whether by name or not), which is either because of reliability, sheer power, or some combination of the two.
And yet Bloodcarver has begun standing up to him to this level from just a few days at most on Earth.

This is not a good thing for the Father, not if he wants to rule.

In Orientation part 5 Bloodcarver says that he is Father’s second. Or in short the one who is supposed to carry out the orders of Father. That would make it normal for Father to send him to bring back the sphinx.

So I see, yes. Which makes it even more worrisome that (1) he resorted to such violence, (2) that it isn’t usual for even the Father’s second to answer back, and (3) that Bloodcarver is opposing him so.
Seems quite… dis-potic.

I wonder when we’ll get to see Bloodcarver’s wife – or if we already have seen her and not been informed of the fact.

That must be Crackle’s cousin

He’s pretty emo for a dude called “Bloodcarver”. How would one carve blood anyway? Do you have to freeze it first?

It’s implied that Bloodcarver is not a name, but a title. So ‘Father’ bestowed it upon him.

A thing we know about Father is that he took all these eggs and retreated from the final battle where the rest of Dragonkind was slain.

Because these three possibilities would show some different possible sides of this character. I’m starting to be pretty sure that it’s not the first option.

Also… Can Father even exist on the mortal plane? Is he here alive because he used a hellmouth to escape, or is he here because the evil dead go to Hell?

Are those three mutually exclusive, though? Especially A and B, I’d imagine most people would prefer for sphinxes to not kill their entire race or to kill them personally either. Can’t blame him for being scared of something/s that killed every unhatched dragon bar him.

As I recall, the entire reason Michele’s great-great-etc-grandparents went into hiding was because the Sphinx were losing.

The dragons, on the other hand … well, they were being hunted by humans. That was the entire reason for meeting the white dragoness all the way back – she wanted to protect her family from human dragonhunters. Without the medallions…